Don’t be so blue: I didn’t see Watchmen‘s Doctor Manhattan twist — that he has been hiding in plain sight all this time — coming, either.

I’m really going to miss Cal Abar, Angela’s supportive husband who apparently has unknowingly housed at least part of Dr. John Osterman’s consciousness all along. But wow, am I excited to see what big, blue surprises we have coming our way in the final two episodes of the HBO series’ season.

And Cal’s demise is only one of the surprises the hour provides. Read on for what went down in “An Almost Religious Awe.” 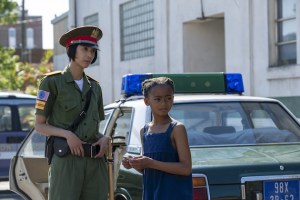 SISTER NIGHT IS BORN | As the Nostalgia works its way out of Angela’s system, Lady Trieu explains to her recalcitrant patient, Angela is likely to experience her own memories more vividly than normal. So throughout the episode, Angela is plunged into her past, and that’s how we witness the day her parents died in Saigon. (For simplicity’s sake, I’m going to cover all of young Angela’s story right now.)

Little Angela (played by This Is Us‘ Faithe Herman) browses in a Saigon store where a display video reels off Doctor Manhattan’s backstory and greatest accomplishments. “An immortal god, impervious to the passage of time,” he developed amazing things via lithium batteries, helped America win the Vietnam War by vanquishing the Viet Cong and paved the way for America acquiring the country as its 51st state. Angela ignores this and instead chooses the movie Sister Night: The Nun With the Motherf—king Gun.

Outside, it’s a holiday. People are gathered, some wearing Doctor Manhattan masks. Angela shows her parents the tape she chose, but her dad immediately tells her to take it back. “People who wear masks are dangerous, Angela, and we should be scared of them,” he says. “They’re hiding something.” (Remember, this is Hooded Justice’s son.) And while Angela’s off returning her purchase, a suicide bomber yells “Death to the invaders!” and kills everyone in his radius — including Angela’s parents.

She winds up at an orphanage, where the police roll up one day and ask her to identify a man suspected of aiding the bomber. She does so without hesitation and doesn’t even flinch when the man is dragged behind the building and shot. One of the officers gives Angela a badge for her bravery, and it becomes one of her prized possessions.

Eventually, June shows up at the orphanage. She and Angela’s father had a falling out about his joining the military; she’d learned of his death when a letter she sent came back marked “deceased.” She promises to take Angela to Tulsa, because “it’s where we’re from.” Then she puts the girl in a taxi, and while June is crossing behind the vehicle to get in the other side, she collapses and (as far as we can tell) dies.

THE TRUTH ABOUT BIAN | In the present, Cal tries to get into Lady Trieu’s facility but is stopped at the gate by a hologram of Bian. It’s simply too close to the launch of the Millenium Clock, she explains, so he’s not allowed on the property. Inside, Angela is undergoing numodialysis, designed to purge Will’s memories from her system. She assumes she’s hooked up to Will, who’s in another room, as part of the process; Trieu does nothing to make her think otherwise, except to say that seeing her grandfather can only do harm.

While eating lunch with Lady Trieu, Angela asks the quirky zillionaire what exactly the clock is all about. “I have a secret plan to save humanity, and it starts in Oklahoma,” she says, totally deadpan. Then she brings up Cal’s crash, which apparently left him with total amnesia. She’s skeptical. “It happened,” Angela says testily. Then Angela asks whose memories Bian is receiving via infusion each night. “Her own,” Trieu answers readily. “Bian’s not my daughter. She’s my mother. Before she died, I harvested her memories, and I cloned her.” OK then! She explains that she wants both of her parents there when she completes her greatest accomplishment.

Hours later, while Lady Trieu is addressing the crowd gathered to watch the clock launch, Angela smashes her way into the room where she thinks Will is. But it turns out that the “living host” she’s hooked up to is… an elephant.

Angela takes the elevator to another floor, where she finds a globe glowing in the darkness: If she touches a geographical location, it’ll play recorded transmissions from the Mars phone booth thingy in that area. “Doctor Manhattan isn’t listening,” Trieu says, entering the room. “He’s not even in Mars.” Angela asks where he is. “Right here in Tulsa, pretending to be human.” (!!) But when Trieu notes that Angela isn’t asking who Doctor Manhattan is pretending to be, the detective leaves abruptly. 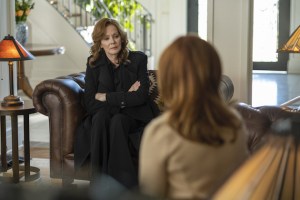 BLAKE’S IN A BAD WAY | Let’s put a pin in that for a moment and check in with Agent Blake. Petey calls her from Looking Glass’ house: The five Kavalry members that were coming for him two episodes ago are dead, and Wade is MIA. Blake tells him not to call it in, then goes to Jane Crawford’s house.

Laurie lets Jane know that she thinks Will Reeves killed Judd because he was part of Cyclops. “What if the 7th Kavalry is just Cyclops by another name?” Blake muses. She continues that Judd was in league with Sen. Keane to create a society where both the good and bad guys wore masks, and eventually people would have nowhere to put their faith but their elected leaders… like a potential President Keane. “Well, that was the original idea,” Jane says, not even bothering to pretend she’s innocent. She indicates that their nefarious plans extend well beyond the American presidency, then there’s a funny bit where she can’t get the remote-controlled trap door Laurie is sitting on top of to open correctly. Eventually, though, she does. And a shocked Blake drops into the basement.

She wakes up chained to a chair at 7th Kavalry headquarters. Keane is there, spouting off some nonsense about how “it is extremely difficult to be a white man in America right now… so I’m thinking I might try being a blue one.” Laurie looks worried. 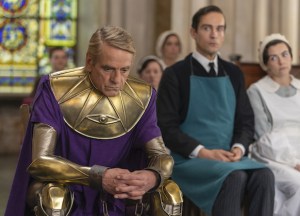 THE DEFENSE RESTS | Elsewhere, Adrian Veidt’s trial is wrapping up after 365 days. Ozymandias, wearing his gold-and-purple finest, seems bored while the (way more advanced than we’ve previously seen) Crookshanks offers up the prosecution’s closing arguments. The gallery is filled with various Crookshanks and Phillips clones, and they all seem rather mad at their master. When it comes time for Veidt to defend himself, he stands and farts loudly. “The defense rests,” he says.

The Game Warden is serving as judge, and he is incensed by this flagrant, stinky disregard for the proceedings. He makes a big show of consulting a jury of Veidt’s true peers — a passel of pigs — and declares Veidt guilty. The Blonde Man cries a single tear while all of the clones shout “Guilty!” over and over. 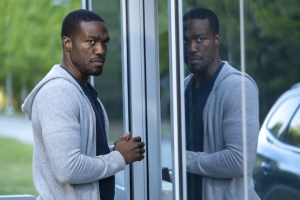 ‘WE’RE IN F–KING TROUBLE’ | Ok, back to Angela. She busts out of Lady Trieu’s compound, bulldozing Red Scare and Pirate Jenny’s stakeout vehicle in the process, and winds up at home. The Kavalry are waiting outside her house, but she doesn’t see them. Inside, she tells Cal she loves him and that he’s her best friend… then she pulls out a hammer. “Time to come out of the tunnel,” she says. He looks perplexed. “We always knew this day would come,” she says, approaching him slowly while he stares at her as though she’s lost her mind. As she keeps talking, we learn that there was no accident that wiped his memory. “It was a lie so that we could be together, at least for a while,” she says. “If it’s any consolation, it was your idea.”

Cal thinks the Nostalgia still has her brain all scrambled, and tells her that she’s not herself. “No, Jon. You’re not yourself,” she answers calmly. (I’ll remind you here that Doctor Manhattan’s real name is JON Osterman.) Then she hits him in the head with the hammer, and keeps pounding after he goes down. Eventually, she digs around in his skull and pulls out a disc, then holds it up and seems to speak to it: “Hey, baby. We’re in f–king trouble.”