Going into the final season of Arrow, we knew that Oliver would do the Monitor’s bidding; Diggle would have his buddy’s back more than ever; and Mia & Co. would be doing that 2040 thing they do.

But no one could have foreseen the rich character development that Earth-Two’s Laurel Lance would undergo, in almost every episode to date. The result has been one of the most enjoyable aspects of Arrow‘s 10-episode farewell run.

To be clear, Earth-Two’s Laurel (played by original cast member Katie Cassidy Rodgers) hasn’t always been served well in her Arrow existence. (The doppelgänger first popped up on The Flash, remember.) During Arrow Season 5, she was an unexpected ally of Adrian Chase and part of the larger mind eff Prometheus pulled on Oliver. Season 6, however, struggled to make her more than one of (ugh) Ricardo Diaz’s henchmen, until the show began exploring the friction between her and Dinah and the non-biological bond between her and “our” Laurel’s father, Quentin. In Season 7, sparked by Quentin’s heroic death (in the course of saving her), Laurel passed herself off to Star City as her Earth-One counterpart, and the character’s true evolution got underway — to the point that she would earn Felicity’s qualified endorsement and even help Team Arrow during its final showdown with Emiko. 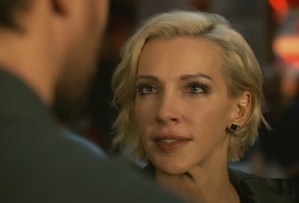 And yet Arrow, with its shortened final season and amid all the Crisis prep, has found time to nuance the character further. Starting with the season opener, we saw how Laurel had formed her own crimefighting vigilante duo on Earth-Two, alongside Chase’s own doppelgänger. Episode 2 then went deep on Laurel’s reaction to her Earth being destroyed — and her processing of Lyla’s suggestion that “this world needs you, too.” (Cue Performer of the Week honorable mention for KCR.) In Episode 4, Laurel had occasion to school a time-transplanted Mia on the ways of revenge, while Anatoly in Episode 5  was prompted to make note of how this onetime villainess had, against all odds, “changed her spots.”

Most recently, Arrow‘s time-loopy Episode 8×06 set the stage for Laurel to reunite with no less than Quentin, as we/she realized that what she desperately needed was to say a proper good-bye to her not-quite-Dad, the one who inspired her to become a hero.

Arrow‘s final season has also explored other characters in engaging ways, from Oliver laboring to make sure that his sacrifice, of family, is worth it, to Diggle facing stark realities about his sons’ disparate futures. But seeing a Laurel that we once barely knew experience new layers of growth, and applauding her every step of the way — and seeing Cassidy Rodgers dive into and make the very most of this arc, as a performer — has been one of the Arrowverse’s great pleasures this fall.