Life as a new parent can be a scary thing, as Sean Turner learns via a shocking twist at the end of Servant‘s series premiere.

Sean is a laid-back consulting chef who works from home. Dorothy is a high-strung local news reporter. One day, after Dorothy goes back to work from her maternity leave, Sean levels with Leanne: As she (and we) clearly can see, Jericho is not a real baby. “It’s called a reborn doll,” he says, explaining that their infant son died when he was 13 weeks old, and Dorothy had a full psychotic break in response. “This was the only thing that brought her back: transitory object therapy,” he says, adding that they didn’t announce the death, and only Dorothy’s father and brother know the truth. 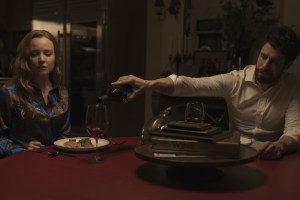 While Dorothy’s not around, he continues, Leanne can “live it up.” But the nanny doesn’t seem to process what’s he’s saying. She lovingly cradles Jericho to her and says she has no questions for him, then continues to act as though the doll is a real, live boy.

Dorothy’s brother Julian (the Harry Potter films’ Rupert Grint) swings by a few days later to ogle Leanne. When she’s not there, he has a drink with Sean. “My sister needs professional care” and not the experimental therapy she’s undergoing, he points out. But Sean assures him she’ll come back to reality when she’s ready. “What if she never comes back?” Julian muses.

When the Turners are gone (with Jericho in his carseat in the back of the vehicle, of course), Leanne roams the house. She tries on Dorothy’s jewelry. She takes a bath in the master suite’s tub. And on another evening, she returns to that bathroom to find Dorothy taking a bath and writhing in pain from mastitis. (Yep, she’s continuing to pump to feed Jericho.)

“You just need to clear the blockage,” Leanne tells her employer, reaching into the water to massage Dorothy’s breasts. Dorothy tearfully talks about putting Jericho on formula, but the younger woman encourages her to persevere with breastfeeding. As she continues to knead, Dorothy’s blockage clears and she gasps in relief.

The next day, Dorothy goes to work. Leanne puts Jericho down for a “nap” and asks Sean to listen on the baby monitor while she runs to the drugstore. He repeats that she doesn’t have to keep up the ruse while Dorothy’s out, but the girl acts as though she hasn’t heard him.

She’s been gone a while when he hears a sound very similar to a baby’s cough coming through the monitor. And when he goes upstairs, he’s dumbfounded to find an actual baby crying in the crib.