D’oh! Just shy of the Top 10, The Voice unplugged the mic on one more of its Season 17 contestants Tuesday. Based on Monday’s mixed bag of performances by the Top 11 — and your responses in the poll that followed TVLine’s recap — the singer likeliest to be silenced seemed to be Team Kelly Clarkson’s Shane Q.

But, of course, Shane had already surprised us a couple of times: first by being his coach’s Save in the Live Playoffs (over the superior Hello Sunday), then by avoiding the Bottom Three altogether during Dedication Week. What was the rest of the audience hearing that I just wasn’t? And did they hear it again Monday? 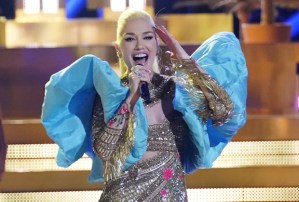 Before we found out, we were treated to a kinda-all-over-the-place rendition of the Bee Gees’ “How Deep Is Your Love” by Team John Legend (which was unremarkable, save for the oddity of belter Katie Kadan singing softly and the “oof”-ness of how off key poor Will Breman got); Gwen Stefani performing a medley of her hits from her now-15-year-old debut solo album, Love. Angel. Music. Baby., while wearing two empty beanbag chairs as shoulder pads; and Team Blake Shelton performing B.T.O.’s “Taking Care of Business” (which could not have been more hilariously wrong for Kat Hammock’s sweet little voice; seriously, who is picking these numbers?!?).

Shane Q (Team Kelly), “Jealous” — Grade: B- | When Shane started singing, all I could think was, “Where the hell has this Shane been the last coupla weeks?!?” He sounded better than he has since the Blinds. Later, his vocal got a bit iffy, but overall, this was a much stronger performance than he’d given in ages. “You just pulled out some stuff that you don’t normally do,” his coach said afterwards. Agreed.

Myracle Holloway (Team Gwen), “You Are So Beautiful” — Grade: A- | Tackling Joe Cocker’s classic was a shrewd move on Myracle’s part. Her soulful rendition was sparsely arranged (as opposed to her over-orchestrated performance Monday night), which allowed her lovely, raspy voice to take center stage and remind us of just how good she really is. Were this just a singing competition, not a popularity contest, she’d have easily won.

So, your response to the Bottom Two? Do you agree that the wrong singer went home? Vote in the poll below, then hit the comments.