Dunno about you, but after some of the dubious song selections The Voice’s Season 17 contestants and coaches have made, I was looking forward in a big way to Fan Week, during which the audience assigns the contestants their numbers. If nothing else, viewers couldn’t do worse than whoever thought it was a good idea for Team Kelly Clarkson to choke out the Cranberries’ “Linger,” right? (Shudder.) So, which of the Top 11 nailed — and failed at — their covers? Read on. We’ll discuss.

Katie Kadan (Team Legend), “Without You” — Grade: A | The “Kadanators” assigned Katie a doozy in Harry Nilsson’s classic. But I had faith that she’d sell it and then some. (Yeah, I’m very Team Katie — erm, does it show?) On stage, she was spectacularly restrained on the verse, then, as you’d hope, wholly unleashed on the chorus. When she really opens up her voice and lets loose, there’s just no one on the show who can touch her. She is at once polished and raw, controlled and emotional — a true force of nature. “I pity anyone who has to sing after you today,” her coach told her afterwards. Frankly, me, too. 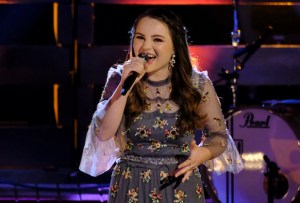 Kat Hammock (Team Blake), “I’ll Fly Away” — Grade: C | In rehearsal, Kat’s coach told her that it “literally scares” him to work with her — she is that important to music, in his estimation. Like Bob Dylan. Mm, Kat’s good, but… Dylan-esque? That might be a stretch. In any case, when she took to the mic with her Alison Krauss cover, she faltered a bit. She was, let’s say, 75 percent lovely, in that rootsy Lana Del Rey way of hers, but she fell flat a time or two, ran into a momentarily painful pitch issue and seemed overall less vocally assured than she historically has. Not that her coach noticed. “I don’t care what anybody says,” Blake told her when she was done. “That was magical.”

Shane Q (Team Kelly), “Mercy” — Grade: C- | Shane’s fans chose him this Shawn Mendes cover after apparently seeing a YouTube clip of him doing it in a coffee shop. He was game, promising to go into “beast mode” on the number, no java required. But once the spotlight fell on Shane, he sounded as wobbly as he did determined. (Maybe he was suffering from a bit of the nerves that have plagued him?) Past the halfway point, I found myself thinking, “If this is beast mode, eh, it isn’t all that beastly.” His performance almost caught fire toward the end… but only almost. It wound up flaming out thanks to unfortunate pitch problems. 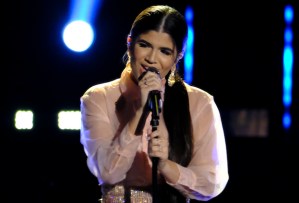 Joana Martinez (Team Gwen), “Dreaming of You” — Grade: C | In rehearsal, Gwen suggested that the audience’s choice of Selena’s hit was an indication that viewers wanted Joana to go back to singing ballads. Gee, ya think? Alas, the promising 16-year-old sorta went in and out of pitch. When she was on, she was very good; when she was off, it was a little “Yikes”-y. I was ready to say that she had probably landed enough long notes to remain out of the bottom Tuesday — but then she muffed the last note. Despite the messiness of Joana’s performance, Gwen excitedly declared it “flawless.”

Will Breman (Team Legend), “Light My Fire” — Grade: B | Aw, just when you thought Will couldn’t get any more lovable, he brought his dog Oscar to rehearsal. Somehow able to focus on something other than Oscar, John advised Will to adhere a smidgen more closely to the melody of the Jose Feliciano version of the Doors hit that “the Blue Crew” had selected for him. On stage, Will began his performance sounding cool and controlled — which was good (obviously), as sometimes when he’s lost control in the past, he’s sounded wilder than pleasant. This was pretty delightful, right down to Will’s freewheeling scatting. Then it got raucous, but it still worked. Will clung more tightly to the notes than he sometimes has, making this, as I believe Blake put it “weird and awesome.” 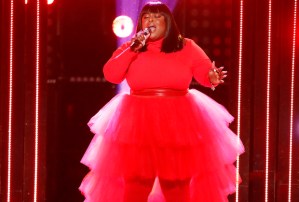 Rose Short (Team Gwen), “Maybe I’m Amazed” — Grade: A | In rehearsal, Rose told Gwen that she’d always wanted to perform a song like this Paul McCartney classic. And even just as Rose was practicing, it was easy to hear why: She. Had. This. On stage, she worked her voice like a yo-yo, taking it higher and lower, from raspy to soulful and back, as easily as if she was just crooking a finger. And maybe the biggest compliment I could pay Rose is that her performance was so go-for-broke passionate, it even made me forget about that dress that called to mind a fuchsia Christmas tree. “That was from the Lord!” Kelly exclaimed afterwards. “I feel saved!”

Hello Sunday (Team Kelly), “The Middle” — Grade: B- | Hello Sunday told us in rehearsal that they called their fans the Weekends. Kelly told them that she wanted to make their rendition of “The Middle” more organic and sassy and full of what she called “Ech!” And apparently, “Ech!” was a good thing, because on stage, the girls kicked off their performance sounding tremendous — unlike so many of the singers we’d heard Monday, like they’d been mixed and mastered. On the downside, they got a little shrieky toward the end, and overall, the number fell flat, like it started at point A and only ever went to point A-and-a-half. 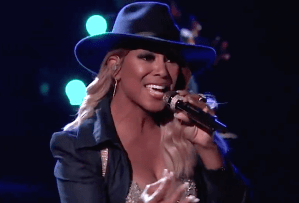 Myracle Holloway (Team Gwen), “Everybody Hurts” — Grade: B- | Myracle told Gwen in rehearsal that she thought her fans’ choice of REM’s ballad was an indication that they really understood her. Gwen advised her not to veer too far from the original melody, as, she noted, while making the song her own, she still had to appeal to the “grandmas in Oklahoma.” When Myracle took her place behind the mic, I couldn’t help but be distracted by the liberties that she still took with the classic. In fact, I thought her fans hadn’t really done her a favor here. She was going into runs right and left, there was no denying that she has a great voice, and she finished strong. But this still wasn’t the “A” (or even the solid “B”) that I felt like it could’ve been.

Marybeth Byrd (Team Legend), “Stars” — Grade: C+ | Marybeth’s adorable name for her fans, she told John in rehearsal, is “the Byrd Watchers.” And she was delighted by their choice of Grace Potter and the Nocturnals’ song for her. Why wouldn’t she be pleased? It sounded like it would be perfect for her. On stage, Marybeth sang as if she was making confession — there’s a sincerity that radiates from her more brightly than any of the spotlights shining down on her. Yet this wasn’t an altogether successful performance. On Marybeth’s big notes, she sounded almost like she was shouting “stars” instead of singing the word, barely staying in pitch as she did so. As with Myracle before her, I expected better.

Jake Hoot (Team Kelly), “Every Light in the House” — Grade: C | “They’re great wings,” joked Kelly after Jake confirmed that his fans called themselves the Hooters. He was as excited as he was nervous to have been assigned Trace Adkins’ ballad. But at first, I thought he should’ve just been excited. He sang like the embodiment of a love note that we all wish we’d get. However, he ran into a little trouble when he tried to loosen up and wound up ending the song on a bum note after a run of distracting pitch problems. This wasn’t the slam dunk that it should’ve been. Maybe Jake really is just a pretty-good singer, not a star in the making?

Ricky Duran (Team Blake), “Downtown Train” — Grade: A- | Last up, Ricky told Blake that a restaurant in his hometown had named a drink after him (the “Sing, Ricky, Sing”). As for his Tom Waits/Rod Stewart cover, his coach advised him to go Worcester on it. From the get-go, it sounded like Ricky had a great handle on what he was doing with the number. If this had been an audition for a role, I would’ve said he was totally right to play the character. Vocally, Ricky was 100 percent. He didn’t hit a single bum note. If I had any quibble with the performance, it wasn’t with Ricky, it was that I wish the band had been mixed back a little bit so that the music hadn’t come so close to devouring his stellar voice.

So, which of the Top 11 really wowed you? Vote in the poll below, then hit the comments. Do you think your pick has a real shot at winning? I’m rooting for Katie, but fear she’s too polarizing to win.