This week on The Flash, Ramsey’s blood goes viral, and not in a funny Internet meme kind of way.

After Ralph is critically injured by Ramsey, a transfusion of Barry’s speed-healing blood is used to save his life. Barry worries that the incident means the team isn’t ready for Crisis, which is only two days away, but Iris reassures him that they are prepared for whatever comes next. Barry retreats to his loft, where he is greeted by Ramsey, who knows all about Crisis and that Barry is The Flash. But Ramsey’s not really there, and this isn’t a nightmare either: Ramsey’s cells infected Barry when he gave Ralph his blood, the speed force (in the form of Nora Allen) informs Barry, whose body is currently passed out in his home while he’s going through one helluva mind trip. According to Nora, Ramsey wants to take control of Barry and bend him to his will. And he’s got a pretty compelling argument for Barry accepting his lifeblood.

First, Ramsey accuses Barry of not even trying to stop Crisis — “It’s almost like you want to make Iris a widow,” he says — before showing Barry a newspaper headline that reads “Flash Lives!” Not only can Barry save lives and bring people back from the dead, but he can survive the Crisis with Ramsey’s blood. “Save the world and live. Have all you want,” Ramsey urges him, showing him a life with Iris and baby Nora.

Barry resists, even though he feels doubt about his fate. Now that he’s finally living for himself, with a wife by his side and a daughter in the future, “I don’t want to die,” Barry says to Nora. “I know that’s selfish. I’m sorry I let you down.” Nora tells him that his courage to move forward in the face of overwhelming odds makes him a hero. But as Barry realizes that Ramsey is telling the truth, in his own manipulative way, he starts to get angry and his fever intensifies. All the suffering he’s gone through is because of the speed force, which wants him to be The Flash despite the pain it inflicts. 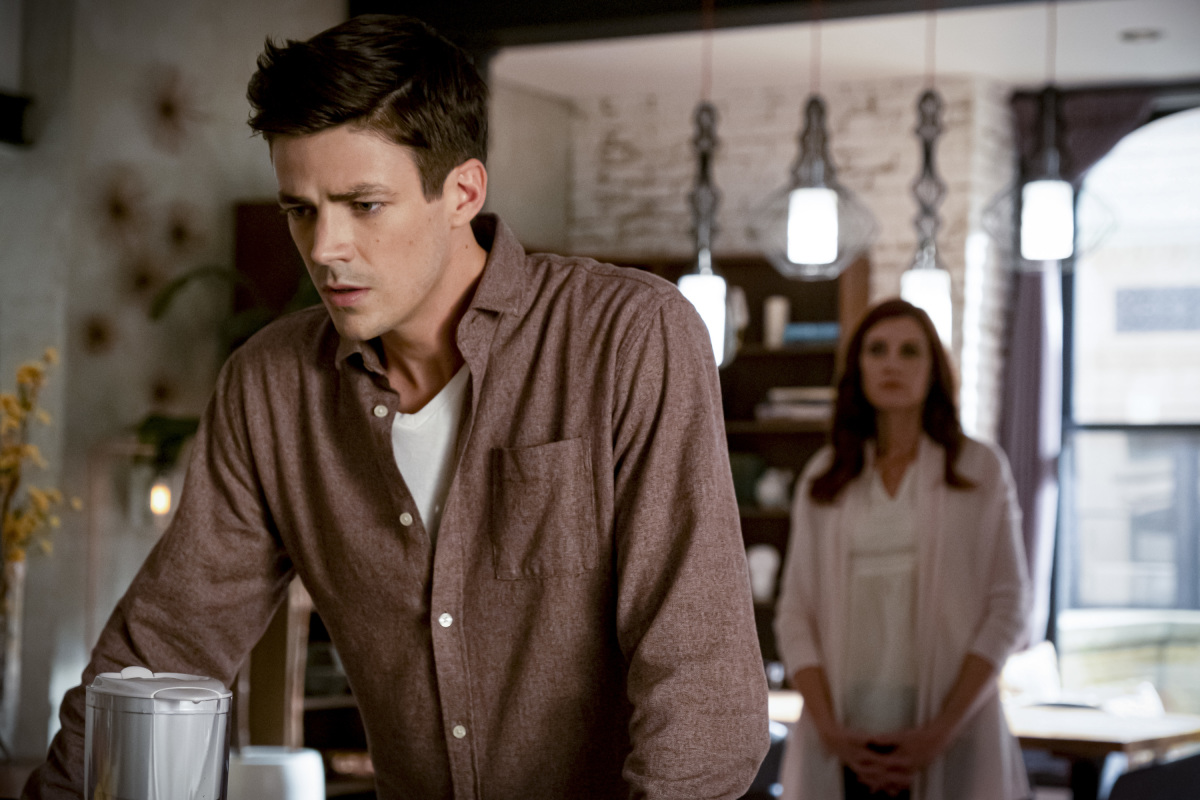 Nora reminds Barry that there are universal forces at stake and that Ramsey’s infection is twisting his heart. If he accepts Ramsey’s blood, yes, he will have eternal life, but it will also overtake his soul, causing him to lose all the parts that Iris loves about him. As Nora and Ramsey both pull at Barry, begging him to pick their side, Cisco and Caitlin discover Barry’s unconscious body and inject him with Velocity X. (Frost has a panic attack during the incident, so Caitlin will be handling the medical emergencies in the future, she informs Cisco.)

Barry wakes up and announces, “I beat it” — but what exactly did he beat? When Iris joins him at S.T.A.R. Labs, she immediately senses that something is off. “That’s not Barry,” she says to Frost and Cisco. Indeed, Barry has been taken over by Ramsey, black goo and all. He speeds off to meet up with him, knocking out Iris, Cisco and Frost in the process. As Barry kneels, Ramsey says to him, “Welcome, my blood brother. I am the world’s salvation… Soon the entire world will embrace bloodwork.”

Elsewhere in the episode, Allegra sees Iris’ article about The Flash’s disappearance in Crisis, but when she tries to broach the subject with her boss, Iris brings up another story. Later, Allegra confronts Iris about Barry’s secret identity and the fact that she’s avoiding the Crisis article. Allegra urges her to write it, because she’ll never forgive herself if she doesn’t do it. Iris finally sits down to type up the feature, tears spilling down her face as she details The Flash’s heroism. As for the other story, it involves a courier business for the rich that is somehow connected to Allegra’s sister. Iris’ lead ends with a murder and a new mystery for Team Central Citizen.

Finally, Nash Wells seems to have broken through the wall to The Monitor’s secret door.

What did you think of “The Last Temptation of Barry Allen, Pt. 1”? Hit the comments with your thoughts!