This Wednesday at 9/8c, CBS’ SEAL Team braves another operation without Jason at the helm. Instead, Ray will again lead the charge as Bravo 1, subbing for his injured brother, as the team ventures into enemy territory — during the light of day — to rescue a downed Marine pilot.

TVLine spoke with series vet Neil Brown Jr. about his character’s bittersweet “promotion,” the dangerous obstacles immediately ahead, and whether Ray can help nudge Jason toward the help he so desperately needs.

TVLINE | Ray made some bold calls last week as Bravo 1. Does he realize they just got by, by the skin of their teeth?
I think they always do. If you see the way they operate, they’re always just a sliver away from it going bad. They just have to take all the information and make the right call. But I think Raymond is well-informed, and more often than not he makes the right call.

TVLINE | Is this current scenario a bit bittersweet for Ray, because it means Jason is on the sidelines?
Absolutely, 100 percent. He’d rather his brother be there with him in any capacity, let alone as team leader. They’ve been working together so long, he’d rather see his best friend and brother walk away on his own decision as opposed to being sidelined. I know that Ray will do his best to lead Bravo in the way that Jason would, albeit a little more cautiously. Jason can be a bit wild, and that’s why they work so well, because Ray will reel it in a bit.

TVLINE | That’s why I loved the point that Ray made in choosing the new guy, because you don’t want two Jasons. You need the balance.
That was his call, and that was one of the reasons why they chose Vic, played by Lucca De Oliveira, over Yoder. Bravo works so well because at the head you have these two guys who both actually think in the same way, but one is more cautious than the other. One thinks about things that the other one doesn’t. It’s like the left and right side of each other’s brain. 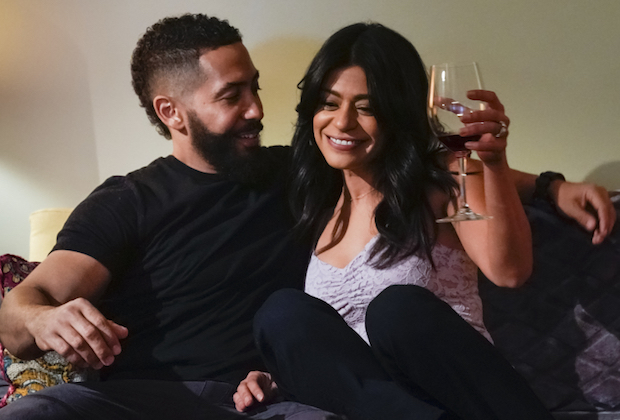 TVLINE | Are we going to get any thoughts from Naima on Ray’s current situation?
Interestingly enough, one of the things that’s causing more pressure on Ray, and on the team as well, is because there’s this warrant officer track that he’s on, and then now he has to run the team. So he’s got all the eyes on him now, and of course there is his home life and Naima, played by Parisa [Fakhri], who is just amazing. There are some things you’ll see in the next few episodes about how they’re dealing with it all, but they’re a power couple and a team within the team that finds their way, no matter what.

TVLINE |  I was pleased to see them come out of the other side of last season  stronger, because it was getting a bit dicey there during that long deployment and with that woman at the bar….
Which was nothing. I think that speaks more to people’s own desires more so than it speaks to Raymond. As soon as he opened his eyes up and realized that this woman was smitten with him, that was the last time he spoke to her. He pulled his hand away and was like, “No, no, no,” and then was mad at himself for letting it get that far. Some guys’ thing is cheating on their wives; Ray would never do that. His was trying to quell his anger, and because of that anger he had a cloudy mind. He was talking to someone outside of his marriage and outside of his team because he was very embarrassed about how he was feeling, and very angry about how he was feeling. He didn’t want the people he loved the most to have to worry about him or feel that or didn’t even think that they cared. The journey of faith can be these huge peaks and valleys, and that’s what that was.

TVLINE | Yeah, Ray was quite unsettled last season by that guy not getting his last rites — which was an interesting beat for the show to play.
Yeah. I mean at a certain point he blamed Jason for it, but then he blamed himself, and then he blamed God. These guys work so very hard and they give their lives and their bodies and their minds to the job. For someone like Ray, who has the only good home life, it’s very difficult to balance all that. And one thing that keeps Ray right is his faith. Before that, he was a wild guy, so when that cracks, it’s like, “Oh, my God.” What happens then? But he found his way back, and he and Naima have had tons of conversations outside of the ones we’ve seen, and they found their way back to happiness and joy. 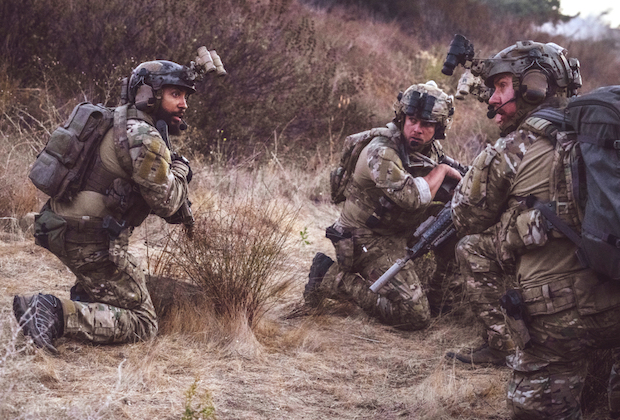 TVLINE | Give me a sense of the challenges that the Ray-led team will face this week, as they try to rescue a pilot who has fallen into enemy territory.
They’re going into, as you say, enemy territory, but they’re typically coming in under the cover of night. One of the most dangerous things — and the reason why I liked last season, because it was so dangerous for Ray to be out there in Episode 21 — was because it became daytime and he was alone, and that’s when they’re vulnerable. At night, the SEALS control things because they’re smooth, they’re fast, you won’t know they’re there, but in the daytime they become a target. That’s part of what’s going to play into this next episode. You have an unknown number of enemy combatants and we don’t know the assets that they have…. [Rescuing] the pilot becomes a difficult task, increasingly, as it goes on. There are going to be a lot of obstacles that weren’t expected.

TVLINE | Will there be a specific, difficult call for Ray to make?
There’ll be multiple hard calls to make, because somebody may get in more trouble than we needed them to, than we were prepared for at the time. 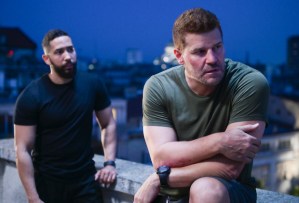 TVLINE | We the viewers have seen Jason just imploding, inside his home, trashing the place…. He’s not dealing with his situation well, at all. Will the team-at-large get an inkling of just how bad a place he is in?
Ray, his best friend, knows exactly how bad he’s got it, but he also knows that his friend throughout the years has had to be dealt with in different ways. Sometimes he has to back away completely, and sometimes he has to step in his friend’s face and tell him like it is, and sometimes he has to just be an open ear. Albeit, with the coming trials of the promotion and having to run the team and then all the stuff they went through last year, it’s become increasingly difficult for Ray to be there for his friend as much as he would like to be. So what Raymond has advocated for, for a few seasons now, is therapy — “You need to talk to someone.”

I think the hope is that Jason will eventually talk to someone and find a way to let go of some of this bottled-up pain, which they all need to do. Ray has that with his wife, and he talks to her. He doesn’t tell her everything or anything like that, but he has a release valve. Jason doesn’t really have that anymore. And if there is a release valve, it’s Ray. So as we go on in the future I think these two brothers will find a way to help each other.

TVLINE | Things so far have been going smoothly with both Captain Lindell in charge and Vic Lopez on the team. Is either of those situations going to start to get a little prickly, a little unpredictable?
Anytime you have a new commander, you’ve got to get used to the way he wants things run. I think Captain Lindell ultimately is a special operator who just wants things done more efficiently and better. He’s actually a guy after Ray’s own heart. The new guy, Vic, is similar to Ray in that way, and that’s why Ray has taken him under his wing, even more so than Jason, who normally does that.  I think those two characters, Lindell and Vic, will add in a bunch of new colors to the painting that is SEAL Team. It’s going to be very interesting how we all navigate that.

WATCH AN EXCLUSIVE SNEAK PEEK,
THEN READ ON FOR MORE:

TVLINE | Lastly, we just heard the news about SEAL Team cast appearing on a primetime Price Is Right special. Had you ever been on that stage before?
No! And it was a dream come true. You’re looking at it as a kid like, “I’m never going to get there,” and then you’re like, “Oh, God, I’m here. How about that? This is pretty cool.”

TVLINE | What were you most excited to see in person?
The wheel! Everybody wants to get to the wheel, bro. And seeing the audience, which was all [military] veterans…. I’ll tell you, man, I come from a military family, and I really love what CBS has done and is continuing to do, particularly as it pertains to SEAL Team, with how they treat and care about veterans, and how right we try to get the show for the community and even for regular military and bringing in their family, because it’s not just the vets who serve. It’s the families who serve. Just seeing how much they love this show brings us to tears consistently, because it feels right.

It feels like a marginalized part of our society that is just treated sometimes as a tool, and we just want to show that there’s so much more than that. You have these beautiful, bright, amazing people who are the ultimate servants to this country. I’m just really humble to be doing it.