This week on Arrow — in the penultimate pre-Crisis episode — Lyla threw Oliver for quite a loop. How did this unusual odyssey prepare him for the cosmic battle to come?

As teased by director David Ramsey, this “alternate reality” escapade evoked the likes of Groundhog Day, Russian Doll and, yes, “that Tom Cruise movie,” Laurel. Oliver kept waking up in his Star City apartment at 6:27 pm, only to be told by an arriving Mia, William and Connor that he was late for a fundraiser (for the Star City Vigilante Pilot Program, Rene later informs us). During his first trip to the soiree, Oliver sees and confronts Diggle and then Lyla herself about the whole “tranq dart on rooftop” thing, but they brush it off as a misunderstanding — that Lyla has been working as a double agent.

Oliver then learns that the mayor with whom he is giving a joint speech is Quentin Lance, who, yes, got shot years ago by Diaz, but in this scenario just barely survived. When a hostage situation arises at the SCPD, Quentin insists on going in to talk to the armed mercs, as requested, while Oliver sneaks in through the back. Oliver manages to disarm the lead tough, but not before he triggers a bomb in the basement, killing everyone. 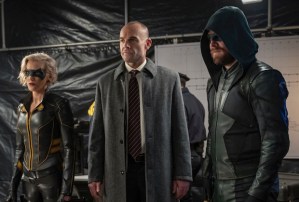 Oliver then woke up back on his couch, 6:27 again, determined to dodge the bomb this time around. But no matter what he tries, and even with a similarly time loop-ing Laurel’s help, they can’t seem to keep Quentin alive. During one  of Quentin’s final “deaths,” Laurel opens up about how he is/was the reason she has tried to become a hero — to which not-quite-her-father responds, “Sweetheart, you are a hero.” Laurel says she never had a chance to express how much Quentin meant to her — except in saying that, she just did. Laurel realizes that all she ever wanted was a chance say a proper good-bye to Quentin, and now she has. And with his latest passing, she vanishes from this ongoing time loop.

The next go-round, Lyla explains to Oliver that Laurel got what she needed from this exercise, and now The Monitor needs Oliver to understand that the only way to “win” is to accept the inevitable. Oliver however tries to again to save Quentin, but even Lance knows his number was rightly up the day Diaz shot him — that after outrunning death for so long, that time was different. He has made peace with his fate, and Oliver should, too.

When Lance’s latest death triggers another reset, this time Oliver starts out by avowing to Mia, William and Connor  what a gift it has been to get to know them, and how proud he is of them. Then, at the fundraiser, he pulls Quentin aside to… ask what made him decide, years ago, that Star City’s resident vigilante wasn’t his enemy anymore. Quentin says that his daughters’ opinions played a huge role toward leading him to realize that they were on the same side and shared the same goals. Oliver then confused Lance a bit by lamenting this second good-bye, before shaking his hand and walking away.

Lyla meets up with Oliver and congratulates him for now understanding that just as he couldn’t change Lance’s fate, nor can he change his own. And the reason for this elaborate exercise was because he is the kind of person who has always needed to see things for himself. Lyla confirms that she has worked with the Monitor for a while now, and keeping that secret from John was the hardest thing she ever had to do. But she did it for the same reason that Oliver walked away from Felicity and baby Mia, to protect family. A Crisis is coming, she asserts, and all they can do is try to survive it. With it comes an evil “greater than anything we have ever had to face,” and Oliver is they only chance they have of stopping it.

But first, is it time for Oliver’s final mission, which starts off with him and Laurel waking up inside a tent, outside of which they find Diggle, Mia, William, Connor…