Lyla, what have you done?!

Arrow viewers will get the answer to that question this Tuesday (The CW, 9/8c), in an episode that marks original cast member David Ramsey’s latest directorial effort.

When last we tuned in, Laurel had opted not to take the mysterious Monitor up on his offer to restore her Earth-Two home, in trade for her betrayal of Oliver. After delivering that decision to Lyla, Laurel revealed that Diggle as well as Oliver were now apprised of her double-dealing as the Monitor’s apparent sidekick! Cue the zipping of tranq darts, after which Dig et al slumped to the ground, at the feet of an apologetic Lyla.

What happens next? TVLine invited David Ramsey to tease the fallout, detail the episode’s directorial challenges, and disclose what he grabbed from set as a “parting gift” from the ending Arrowverse series.

TVLINE | People caught in a loop? Things folding in on themselves? Inception?
Think about Inception, think about that. If you think about that, you’ll get more of an idea where we’re going with this. I don’t think you’ve seen this before. 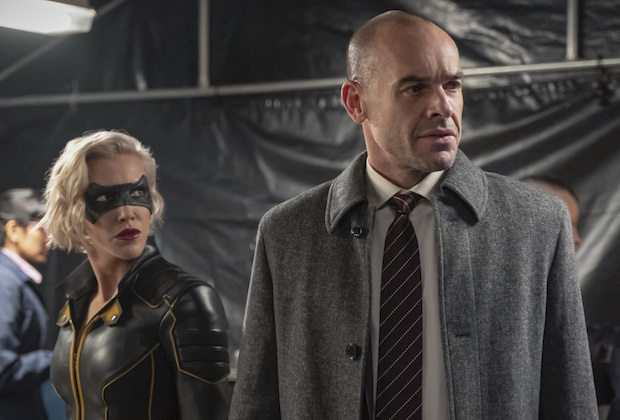 TVLINE | What specific challenges did this episode present for you as director?
It’s interesting you ask that. This particular episode — and I’m trying to say this in a way that I’m not giving away too much — has challenges in that Oliver has to be helped along in his journey, by these figures, and what you want to do with the episode is make sure that what he’s getting is sincere information, that he’s not being manipulated by the Monitor.

By the end of this episode, we don’t want people to say, “Oliver maybe shouldn’t be where he was emotionally, because [SPOILER REDACTED].” What you want, at the end of it, is for all of it to be a sincere, cathartic experience that you have gone through with Oliver, so that by the time it’s over, you’ve gone to a new emotional place with Oliver — and you don’t feel as if it’s been manufactured in any way. You don’t feel used.

TVLINE | We will feel like these past few episodes were time well spent.
That’s right. Paul [Blackthorne] and Stephen [Amell] and I had long conversations about this, just in terms of by the end of this episode, you wanted to feel like Oliver is a different place, and it’s because his experience has been genuine. All these things really, truly happened in such a way where it has helped Oliver in a sincere, truthful fashion. And when you see the episode, you’ll understand better what I’m talking about. So that was the challenge for me as a director. 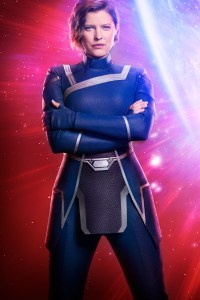 TVLINE | When last we saw Diggle, he had been zinged in neck by a tranq dart while glaring at Lyla with much confusion. What state is he in the next time we see him?
The state you see him in is… recovery. That would be the quick answer. He’s recovered from what happened on that rooftop. And you get to see them all, and they have all recovered. Part of the recovery is what’s happening in the episode — particularly with Oliver. I can’t tell you exactly how they recover, but when you meet Diggle, Oliver and Laurel again, after the tranq, they’ve all recovered.

TVLINE | I imagine that there are some serious words to be had between John and Lyla.
There are.

TVLINE | Were you excited for Audrey [Marie Anderson], to see her finally “suit up” herself, as Harbinger?
Oh my God…. Audrey came to me like, “Oh, I feel different in this uniform! You just put it on and something happens!” I was like, “Now you’re getting the superhero stuff!” I was so excited, and happy, for her. She’s been with us since the beginning, and it’s such a wonderful arc for her character. And that arc, you’re going to see so much of what is happening with Lyla and with Harbinger in this episode. This episode will answer a lot of questions for you concerning her.

TVLINE | [Showrunner] Beth Schwartz said at very start of the season that there would be some sort of callback to the Baby Sara situation. Is that still on horizon?
It is. It is not in this episode, but Baby Sara has not been forgotten — thank you for asking! — and you will be getting a callback, without a doubt. And honestly, I would say you’ll be getting more than just a callback.

TVLINE | Will we see further bonding between Diggle and Connor? You and Joseph David-Jones had some really nice scenes a few weeks back.
Yes, you will. You will be getting bonding between father and son — and some recovery from what has happened to his biological son [J.J.] in the future. 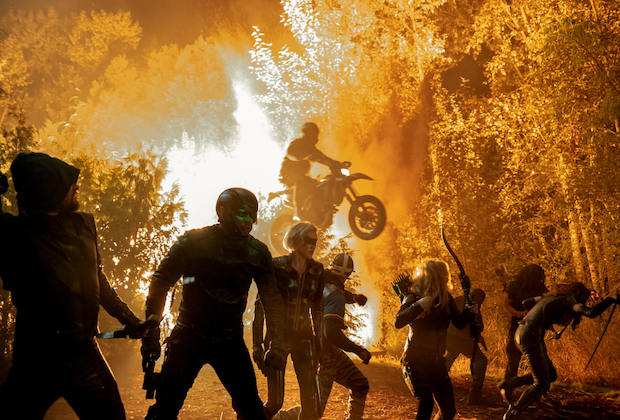 TVLINE | They just released the photos for next week’s episode, which takes place on Lian Yu, and it looks bananas. There is one of all of you lined up, and coming through a fiery explosion behind you is someone on a motorcycle.
Yep. Yep. Lian Yu plays an integral part in not only next week’s episode, but also in [the]”Crisis” [crossover event]. Lian Yu is an important piece of “Crisis,” so next week’s episode is a bit of a precursor to that.

TVLINE | Lastly, what did you grab from set after wrapping filming on Arrow and before bidding Vancouver adieu?
Spartan’s gun. [Publicist on phone chimes in: “Noted!”] Spartan’s gun will not be in the Warner Bros. archives.

TVLINE | You didn’t want anything to do with the visor helmet?
I did, but they would let me take it. I tried to get to the helmet first, but they knew I was going for the helmet!