Judd Crawford’s killer is revealed in this week’s Watchmen. So is the man underneath Hooded Justice’s headwear. Turns out, they’re the same guy.

As many of you guessed, William Reeves — Angela’s grandfather — was the true identity of the masked Minutemen member. And as a side effect of swallowing all those Nostalgia pills last episode, Det. Abar gets a firsthand glimpse of the legendary superhero’s origin story as she relives the key moments of his life. Unfortunately, it comes at a price: Due to complications from ingesting someone else’s memories, Sister Night’s own existence hangs in the balance for most of the hour.

Much of the episode unfolds in black-and-white, with Angela often occupying her grandfather’s physical space in his memories. Therefore, we see him become a New York City police officer in 1938, where he can’t even get through his cadet ceremony before an older black officer whispers, “Beware The Cyclops.” 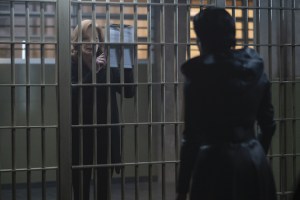 The Cyclops, it turns out, is a group of Klu Klux Klan members who meet in the back of a market. One night, Will sees the market’s owner set fire to a Jewish deli. But when he arrests the man, some of his fellow (white) cops wind up letting him go. And they don’t like the idea that Will is messing around in their business. So one night after work, a few of them chase him down in their police car and kick the living daylights out of him. Then they string him up on a tree and nearly hang him; he’s about to black out when they cut him down, but he’s aware enough to hear them warn, “You keep your black nose out of white folks’ business, n—-r, or next time we won’t cut you down.”

In a daze, he stumbles home with the noose still around his neck. And when he hears a woman screaming for help, he dons the hood he nearly died in and rushes over to beat up the men who are attacking the woman and her date, allowing the grateful couple to escape unharmed. Ladies and gentlemen, may I introduce you to Hooded Justice?

Will eventually makes his way to the home of June, a female reporter with whom he’s flirty. She sees how badly he’s been treated, hugs him and cries. The next day, after he’s recovered a bit, she points out that he’s never going to be able to get justice with a badge. “And if you’re gonna stay a hero, townsfolk gonna need to think one of their own’s under [the hood],” she adds, showing him makeup that will white out the skin around his eyes — aka the only area the mask doesn’t cover.

After a while, Will tracks The Cyclops to their lair at the back of the market. And the fight when he busts his way in turns out to be the one we saw dramatized at the start of American Hero Story (albeit a very different version of it). Inside, he finds literature on mesmerizing people. This will prove important later. 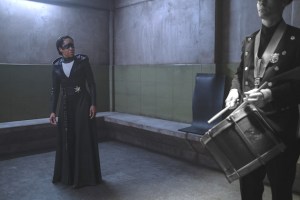 The non-Hooded Justice side of Will’s live proceeds as you might expect it would. He marries June, who it turns out was the baby girl Will was orphaned alongside during the Tulsa race riots. They have a child. June continues to think her husband is an angry man who’s barely keeping things together. Then someone named Nelson Gardner approaches them: He’s also a caped crusader named Captain Metropolis, and he wants to team up with Hooded Justice. And by “team up,” he means “have illicit sex with… oh and the crimefighting, too.” Will is very interested.

Except Captain Metropolis and his New Minutemen aren’t down with Hooded Justice’s desire to take out The Cyclops. They’re also not down with the idea of including a black man in their ranks — Nelson advises Will to keep the hood and makeup on at all times — and they essentially just want him there as a figurehead. This is very frustrating to our already frustrated hero.

One night, Officer Will Reeves is called to a movie theater where the all-black audience has seemingly rioted. “I heard a voice in my head and it told me I had to hurt people, and I think maybe I did that,” a devastated woman tells him. Will sees some white men removing the film projector and tracks them to a warehouse… and the racist he arrested for destroying the Jewish deli is right outside. Will shoots him dead, then lays waste to the Klan members he runs into inside the building. The Cyclops symbol is stamped on all the boxes, and Will finds one of the white supremacists recording subliminal messages to accompany a film. “All Negroes are your enemy. Attack them. Do not bring harm to any white man, woman or child. Only each other,” the man — one of Will’s fellow cops — says, moments before Will strangles him. Then he piles the bodies, douses them in gasoline, takes a projector and burns it all down on his way out.

At home, Will sees his son, Marcus, painting his face like Hooded Justice and loses his cool, which doesn’t sit well with June. “You need to hide under that hood because you can’t stand to see what you’ve become,” she says, announcing that she and their son are moving to Tulsa.

Cut to Judd in his truck the night of his death. When he gets out of the car to inspect the damage the spikes did, a wheelchair-bound Will uses a flickering flashlight to mesmerize the police captain into doing his bidding. He knows Judd has a Klan robe in his closet. He calls him Cyclops. And then he literally hands him the rope to hang himself. While Will (as Angela) watches, Judd dies.

Then, Angela abruptly wakes up at Lady Trieu’s place. “Oh, hi there,” the billionaire says, sounding bored. “Welcome back.”