Profiling serial killers can be a total mind… game.

The new poster for NBC’s upcoming Lincoln Rhyme: Hunt for the Bone Collector — which you can see exclusively below — illustrates how New York police detective Rhyme (Grimm‘s Russell Hornsby) uses his wits to run down the bad guys (given that he can’t, y’know, actually run down the bad guys).

Based on Jeffrey Deaver’s 1997 novel, Lincoln Rhyme follows the titular detective/forensic expert as he comes out of retirement to discern whether a recent murder is the handiwork of a notorious and elusive murderer known as “The Bone Collector.” He’s got a good reason to want the person behind bars: A trap The Bone Collector set years before left Rhyme paralyzed.

Arielle Kebbel (Midnight, Texas) co-stars as Amelia Sachs, a fellow officer who also knows her way around a criminal profile and who teams up with Rhyme to bring down The Bone Collector. But, as the series official synopsis asks, “how do you catch a killer who always seems to be one step ahead?”

The cast also includes Michael Imperioli (The Sopranos), Tate Ellington (Quantico), Brian F. O’Byrne (The Magicians), Courtney Grosbeck (The Bold and the Beautiful). The crime series was created by Mark Bianculli and VJ Boyd (S.W.A.T.), who executive-produce alongside Barry O’Brien and others; O’Brien also serves as showrunner.

Take a good look at the poster below (click on the image to see it in full), then hit the comments: Are you planning to watch Lincoln Rhyme: Hunt for the Bone Collector? 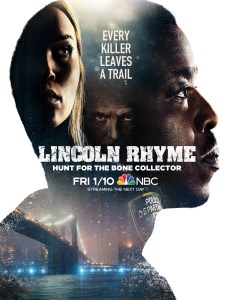