Though A Million Little Things‘ fall finale is not without its share of heartbreak, know this: There was never a scenario in which the ABC series’ writers let PJ take that leap from Rome and Regina’s rooftop.

“I’m very aware of how emotionally connected our fans are to these characters, and I was insistent that we have the warning label at the top of the episode and the PSA at the end of the episode,” showrunner DJ Nash tells TVLine. “There was never a moment that he was going to jump.”

As those who watched Wednesday’s episode know, a good part of the hour was concerned with PJ’s conflicted feelings after learning Jon was his father… and then his devastation upon realizing that the tested DNA, as well as the sweater it was on, actually belonged to Jon’s old pal Dave. Feeling alone and rudderless, PJ wound up standing on the ledge of Rome’s roofdeck and contemplating ending his life. Only some quick thinking and calm talking on Rome’s part saved the young man from committing suicide. 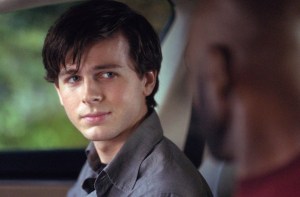 PJ “is in search of a dad, and all season long, he has had a man who’s looked out for him, who vulnerably steps into a dangerous place and then opens up and shares his story in an attempt to bring him down,” Nash adds. “The whole idea of what PJ’s going through was always, by design, going to be a cautionary tale that would prompt Delilah to finally tell her kids.”

About that: Charlotte’s mom finally put Eddie’s name on the baby’s birth certificate. Then she told Sophie and Danny the truth concerning their little sister’s paternity. It didn’t go well. And when Eddie and Katherine were just about to do the same with Theo, they were interrupted by some crashing sounds from the backyard: An angry Sophie had broken into Eddie’s music shed and was smashing his guitars, yelling that she hated him. “You spoke at his funeral!”

In other horribly painful news, Gary and Maggie broke up (!) after she found an engagement ring he’d bought when she was sick. Her relief upon learning that he wasn’t planning to ask her to marry him anytime soon sparked an argument that ended with her packing her things and relocating to her old apartment. Eric assisted in the move but paused for a moment to take a call from a friend. “I’m gonna tell her,” he whispered to the unnamed person on the other end of the line. “It’s just, now is not the right time.” Hmm…

On a positive note, though, Regina realized that she does want to raise a child with Rome, after all. But she wants to adopt, and Rome is more than OK with that.

Read on as Nash breaks down the intensely emotional hour. But first, we wanted to clear up one thing… 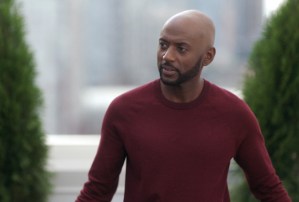 TVLINE | The death of Rome’s mom in the last episode: Was that was the death that you previewed before the season started, or should we still be worried?
His mom died last episode and you know the importance of that death was that Rome, the whole episode was written around the idea that Rome realizes that he is sad but he knows tomorrow will be a little better and the day after that will be a little bit better. Seeing him have control of his depression is one of the important ingredients in Regina realizing that they can have a child.

TVLINE | You know I enjoy talking to you, but you didn’t answer my question. So…?
People die, Kim. People die. It is a part of our show.

TVLINE | Regina’s wanting to adopt the baby: A lot of our readers have commented that they hoped she would stick to her guns and continue to be someone who didn’t want to have kids. What’s your response to someone who might see her change of heart as going back on something she fundamentally didn’t want?
I would say this. The first thing is, we don’t walk in other people’s shoes. And in the same way that people need to, and ought to, respect that person’s decision, we need to accept Regina’s decision.

For me, I got married saying no kids and I meant it. And my wife meant it, and the story we told in the SUV was very, was…you know that’s exactly where we were. We were in a car dealership when we had the conversation. We both changed our mind, and then we had trouble having a kid. I write what I know, and I’m writing the characters I know. The journey that they go on is going to be really emotional, and it will involve secon- guessing and wondering whether [Regina has] made the right choice.

The choice to not have kids is a very valid one. Even though I’ve changed my mind I totally get the choice and respect it. Because if you have a kid when you’re not prepared to make the sacrifices that come with that, that’s probably one of the most selfish things you can do. 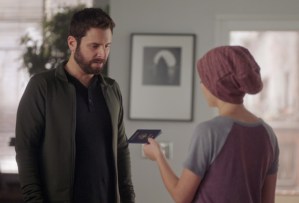 TVLINE | Gary and Maggie’s breakup rang so true to me in the way it started as the most innocuous of conversations then veered into something really painful.
I spent more time writing that scene than I have spent writing some episodes.

TVLINE | Really?
It was the hardest scene to write because I didn’t want one person to be innocent and one person to be guilty… I will say to you it is a breakup that appears to not to have had to have happened. Like the whole show is built on the sliding doors of life and how you step on an elevator, you meet someone, or you call someone to say that someone else tried to take their life and you keep someone from dying. If she hadn’t found that ring, they’d still be together.

If he hadn’t looked for that passport, she wouldn’t have found the ring. If she hadn’t applied to Oxford…I mean just the domino effect of what happens is so very fragile.

TVLINE | Moving forward, will they still be able to both be part of their friend group?
It’s really going to be a challenge. We pick it up in Episode 10. It’s going to be three months later, and we see the aftermath of this. You know obviously he seems to be leaving a bar with a woman and she seems to be moving back into her old place with the help of Eric. Will the love they seek be rebounds? Will they be true love? What will happen? Will they find each other? 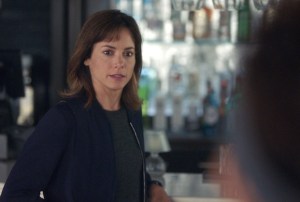 TVLINE | Delilah’s scene at the table with Sophie and Danny was rough.
In the second half of the season, now that Delilah has told the kids the truth, we see just how you know it’s even worse than she thought it would be. We’re going to be seeing both her attempts to clean up this mess and, you know, Katherine’s guilt because she was the one who was pushing for this.

Grade the fall finale via the poll below, then hit the comments with your thoughts on the episode!