Host Nick Cannon opens this week’s The Masked Singer by announcing that “in this crazy town, our famous citizens wear masks to hide their famous faces.” Guys, is this a clue that Fox is about to announce a Masked Singer World akin to Universal’s Harry Potter attractions? Because if so, I am equal parts horrified and intrigued.

But before we get too deep into season passes and park hopping and what I plan to wear on my inaugural visit to Flamingo’s Casa de Clues, let’s review this week’s episode. The show went back to its smackdown format, so the first match-ups were Flamingo vs. Leopard and Flower vs. Rottweiler. 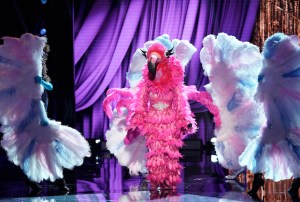 FLAMINGO | “Ay Dios mio,” the pink bird lamented in her clues package, which also showed us photos of the Eiffel Tower and the Taj Mahal. (Is it just me, or do Flamingo’s clues seem much skimpier than those of her competitors?) She belted out “Lady Marmalade” by Patti LaBelle — a ballsy choice, given who I assume is under the Flower mask — and was really, really good. In fact, judge Robin Thicke called it “by far the best of the season,” and he was right. (My guess: The Real co-host Adrienne Bailon.)

LEOPARD | Leopard’s cover of Earth, Wind & Fire’s “September” was oddly low energy, or maybe it just seemed that way in comparison with Flamingo’s party-starter? Anyway, at least his high notes sounded good. “When I was a teenager, I set myself free for the first time,” the pretty kitty said in his pre-performance video; later, on stage, he referenced having multiple “little ones” at home. (My guess: Pop singer Seal.)

FLOWER | Listen, I don’t even care that Flower sang about half a verse of Heart’s “Alone” before freestyling her face off all over the chorus, nor that holding a sign saying, “Yes I AM Miss Patti LaBelle” would have been a less overt nod to her true identity. The woman is magical. (Though I will give props to Thicke for noticing that some of the background actors in Flower’s video were playing pattycake, Like, Patti cake? Get it?!) (My guess: C’mon.) 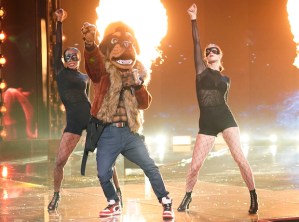 ROTTWEILER | The big dog’s version of Bruno Mars’ “Grenade” was super strong, which is pretty unsurprising by this point in the competition, right? For the record, his clues included: boxing, the word “platinum,” yoga, September and four award trophies. (My guess: American Idol alum Chris Daughtry.)

SMACKDOWN | Leopard hip-swiveled his way through Pussycat Dolls’ “Don’t Cha” (which delighted judge/former Doll Nicole Scherzinger). Flower seemed out of verve by the time it was her turn to croon Survivor’s “Eye of the Tiger,” though guest host Joel McHale’s shout of “Let’s do it, Purple Cabbage!” made me laugh out loud. Winner: Leopard!

THE UNMASKING | Flower was revealed to be Patti LaBelle, songstress extraordinaire (though she’ll always be Dwayne Wayne’s prune-cobbler-toting mom to me).