This Tuesday on The Flash (The CW, 8/7c), “Allen, Barry Allen” joins “Dibny, Ralph Dibny” on a mission to infiltrate a super-secret, Sue Dearbon-related soiree in Midway City. What follows is a caper that leans on the gents’ regular identities, and not so much their super ones. Meanwhile, Nash details for Iris and the rest of Team Flash his plan to save Barry, while Cecile and Frost help Chester P. Runk acclimate to his new life — and just maybe “get the girl” along the way.

Cast member Danielle Panabaker spoke with TVLine about directing the ambitious mix of espionage, adventure and rom-com, whether Froster’s warmer alter ego will weigh in on Barry’s dire fate, and which “Crisis” guest star she was delighted to play with.

TVLINE | For your directorial debut last spring, you took us to the year 2049. What was the biggest challenge that this script presented you as director?
It’s funny — every episode has its own personality, for sure. I watched a lot of [James] Bond movies in preparation, and I wanted to pay homage to the Bond movies as much as possible. The Act V sequence in concept was a little intimidating, but by the time we got to shooting it, I sort of had broken it down into four parts, so the actual production of it wasn’t that bad. But that was a little intimidating at first.

Also, for the scene where it’s Cecile and Killer Frost on comms with Chester and Natalie…. We actually were able to shoot those scenes simultaneously, which logistically was a little complicated and I think something we’ve never done on Flash before, but it turned out really well. I’m proud of that sequence as well.

TVLINE | That’s rare. You usually shoot one side of the conversation, and then the other side.
Yeah, but this is more fun and it gave more realistic timing to Chester sort of fumbling as he’s waiting for his cues. It got some great reactions out of Natalie, as she’s looking at Chester, wondering why on earth it’s taking him so long to answer. 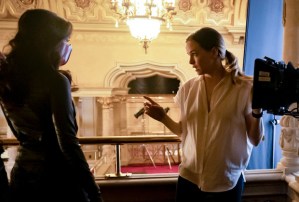 TVLINE | This season, we’ve seen Katie [Cassidy-Rodgers from Arrow], Caity [Lotz from Legends of Tomorrow] and Melissa [Benoist from Supergirl] line up their own directorial debuts. Did anybody reach out to you for any advice?
Absolutely. All of these women are so talented, I know they’ll do a great job. Both Katie and Caity have shot their episode already, and I talked to them quite a bit and tried to be as helpful as possible. They both also went through the Warner Bros. [Directors’ Workshop] program, but it’s really important to me to “pay it forward” in every element of my life, so I tried to provide them with as much information as I could.

TVLINE | In front of the camera, where do you see Frost as being in her evolution? Where do you find the edge with the character while still recognizing that she’s more and more becoming one of us?
I’ve really loved her journey this season. This is the first time she’s getting to have her own voice and make choices and make mistakes. As an actor, it’s fun to play a character who is imperfect and who is making the wrong choice sometimes and acting inappropriately. Killer Frost, more often than Caitlin and more often than most, does act inappropriately. She often doesn’t find herself saying the right thing at the right time. So I’m enjoying it. But we’ve seen her grow. Particularly in Episode 3, there was a shift from the top of the episode where she sort of stormed off and was throwing things when she found out that Barry’s going to die in crisis, but by the end of the episode they’re having a warm heart to heart out on the patio. 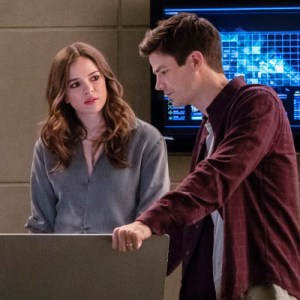 TVLINE | Well, speaking of that, we’ve seen Frost act out over Barry’s situation, but long-time viewers really want to see Caitlin react to his unavoidable death. Are we going to get that moment?
I don’t know that we get it in a way that fans are hoping for. Caitlin is struggling with Ramsey and that relationship, so she pops up for that, but I do imagine that off-screen Caitlin has had her own moment to grieve.

TVLINE | Each episode this season has given us emotional Barry-related moments. Is there anything like that in the episode you directed?
Absolutely. The first half of Season 6 for us is Barry really setting up every member of Team Flash for life after Crisis, and this [week] is his moment to have those conversations with Ralph. While he is certainly attempting to teach Ralph something, a byproduct of their adventures is that Ralph teaches Barry something as well.

TVLINE | How would you say this year’s “Crisis on Infinite Earths” crossover differs from previous ones?
This year’s crossover obviously is bigger than any we’ve ever done. It’s five shows. Two years ago, when we did four shows [for “Crisis on Earth-X”], personally I think that was the most difficult one — and this year somehow they managed to top it, with five shows and an unbelievable number of really interesting guest stars and cameos. I think fans are going to be really delighted by all the people who show up in the crossovers. I still shake my head at how incredible they all are.

TVLINE | Do you as Frost get to play any kind of interesting dynamics with any of the characters from the other shows?
I am not as heavy in the crossover this year as I have been in past seasons, but I do cross over a little bit. It was really great to have [Black Lightning‘s] Cress [Williams] in the crossovers.  I met him and his wife a couple years ago, and he’s just so lovely and warm. It was great to have him.