We aficionados of The Voice spent much of the past week still trying to put behind us the shocks of the Live Playoffs. And there had been a few: Blake Shelton saved Cali Wilson, even after she mangled “Toxic”? Kelly Clarkson risked losing Hello Sunday to spare Shane Q, who hadn’t wowed since the Blind Auditions? And John Legend let go Khalea Lynee, for any reason, ever? Yeah, there had been some real head-spinners. Yet the show, as it must, went on Monday, teeing up a night of performances by the Top 13 that were dedicated to someone special. To whom did they send out their songs, and were their numbers music to our ears? Read on, we’ll discuss.

Joana Martinez (Team Gwen), “Get On Your Feet” — Grade: C | Based on Joana’s rehearsal, the big challenge of her Gloria Estefan cover, which she dedicated to her hometown of Miami, was going to be how she worked the stage during her performance. (She is, after all, used to pretty much standing still for her ballads.) And though she looked like she was having fun up there, she also looked as awkward as the newbie to the spotlight that she is. Worse, with all the jumping around, her vocal suffered big time. So she could be in trouble Tuesday. (Hope she’s getting a power ballad ready.) 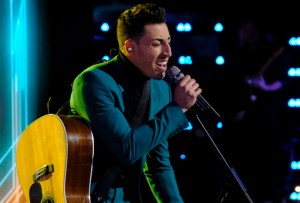 Ricky Duran (Team Blake), “You Are the Best Thing” — Grade: B | Ricky’s girlfriend, he revealed, was the recipient of his dedication. And she had to have dug it. His take on Ray LaMontagne was at once loose and precise, soulful and rockin’. And I love the way Ricky sounds like he’s straining to hit a note even when I suspect he isn’t at all; it builds intensity into the moment. If I have a quibble, it’s that his guitar-playing kept him rooted in place for much of the performance, and unlike Joana, he is a singer who knows how to work a stage without sacrificing the quality of his vocal.

Max Boyle (Team Kelly), “Unaware” — Grade: C | Performing an Allen Stone cover dedicated to the niece and nephew to whom he’s like a big brother, Max wasn’t his usual flawless self. The song got the better of him, sending him now and then into pitchy territory. And when he started wailing, man… I wanted to like it. I wanted it to redeem the performance. But it just sounded kinda screechy and desperate. I could be wrong, mind you — his former coach John told him he’d nailed it. 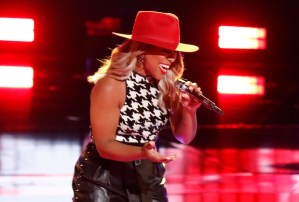 Myracle Holloway (Team Gwen), “I’m Your Baby Tonight” — Grade: C+ | Once Myracle had told us that her Whitney cover was dedicated to the late grandmother who’d raised her, she took her place behind the mic and delivered a rendition of the ’90s hit that was, for the most part, better than average. She really came to life and shone during the faster, bigger sections but sounded a little winded and breathy occasionally and suffered from the inevitable comparisons to La Houston. (Maybe it hadn’t been the best idea for Gwen to advise Myracle to stick so extremely closely to the original.)

Will Breman (Team Legend), “I Won’t Give Up” — Grade: D+ | Will’s Jason Mraz cover, he said, was dedicated to his mom. And here’s the thing about the endearing fellow who hoped being coached by the Sexiest Man Alive might make him the Sexiest Blue-Haired Man Alive: I like him. And I admire his knack for reinventing songs. But his vocals are never quite as polished as I’d like. Maybe that’s part of his charm? But I’d rather listen to Ricky Duran, someone in command of his instrument. Here, Will was passionate, definitely, but also as yelly as someone trying to hail a taxi. 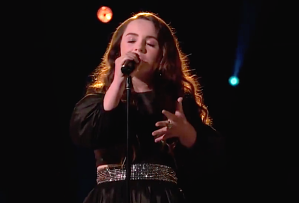 Kat Hammock (Team Blake), “Danny Boy” — Grade: C | Kat’s late grandpa was the person to whom she dedicated her number. And the angels would have had a hard time strumming their harps any more prettily than she sang at first. Then, she slipped into a pitch problem that downgraded what could have been a magnificent showstopper to just a nice try. This should have been, and almost was, really terrific. She was just a smidgen off throughout. Bummer. (Mental note: I’ve gotta check out the mixed version with the vocal sweetened — that has to be amazing.)

Katie Kadan (Team Legend), “I’m Going Down” — Grade: A+ | After dedicating her Mary J. Blige cover to all the single ladies who’d had their hearts broken, Katie more or less exploded on stage. I get it: Some of you aren’t gonna be down with her style of go-for-broke belting, but you have to admit, whether it’s your cup of tea, she is freaking fantastic at it. To me, there is never a moment of hesitation, of uncertainty. As she did here, Katie goes out on that stage and doesn’t so much perform a song as exorcise it from her body. They might as well give her the win right now. She. Is. All. That. This wasn’t a mic-drop moment, it was a mic-hurl moment. S-L-A-Y-E-D. 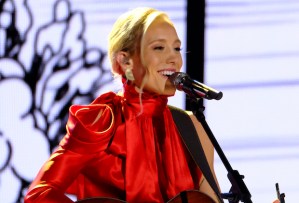 Cali Wilson (Team Blake), “Butterflies” — Grade: B | Prior to taking the stage, Cali told us that her romantic Kasey Musgraves cover was dedicated to her girlfriend. I suspect Cali knew that she had something to prove, since Blake had admitted during the Playoffs that he’d only saved her over Gracee Shriver because he’d assumed Gracee could save herself. And, in fact, Cali did recover nicely from the disaster that was her Top 20 performance, delivering a vocal that went from light and airy to pleasantly insistent. By the time she was done, she’d even set my cold, stony heart aflutter. Delightful.

Shane Q (Team Kelly), “My Wish” — Grade: D | Pre-performance, Kelly’s “chameleon” shared that he was dedicating his Rascal Flatts cover to his mom. And it seemed like a shrewd move, switching lanes in hopes of garnering some country votes. But he sounded awfully tentative at first, like there was a tremble in his voice and not from emotion. From there, he ran into pitch problems and went for a glory note that… eesh… was anything but glorious. He just didn’t seem, or sound, comfortable up there. Done in by nerves, I suspect. 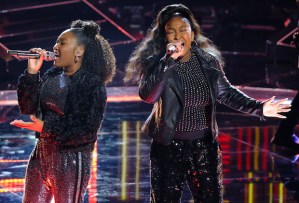 Hello Sunday (Team Kelly), “Mama Knows Best” — Grade: A- | Perhaps not surprisingly, the 14-year-olds’ Jessie J cover was dedicated to their parents (who hilariously came up with their own group — Goodbye Tuesday). And the girls’ performance was a raucous good time, bringing to mind the Moulin Rouge version of “Lady Marmalade.” Their harmonies were tight, their stage presence as sparkling as their pants, and their vocals massive enough to reach the back row of an auditorium two towns over. Not flawless but majorly, majorly impressive. (Side note: That’s how you work a crowd, Joana.)

Marybeth Byrd (Team Legend), “Go Rest High On That Mountain” — Grade: A- | Before Marybeth hit the spotlight, she informed us that her take on Vince Gill was going to be tough to get through, because she was dedicating it to her grandpa… who’d passed away right before she flew out for the show. In rehearsal, John tried to find ways to help her channel that grief into her performance. And for the most part, it worked. Marybeth started off sounding as beautiful as I’d ever heard her, her voice absolutely soaring on the chorus. And she almost, almost recovered from the really emotional part of the song. But despite the missteps that came from her being overwhelmed, it would’ve been hard — impossible? — not to be moved by her performance. 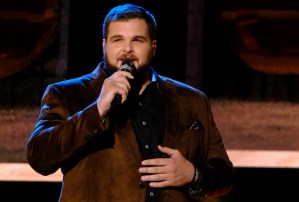 Jake Hoot (Team Kelly), “Danny’s Song” — Grade: B | The 6’6″ country boy revealed before his performance that he was dedicating his rendition of Loggins & Messina’s classic to his little girl. And I expected it to go down like a glass of warm milk — smooth and easy, and likely to put me to sleep. But I’ll be damned — Jake sang with such clarity and conviction that he reeled me right in. The different spin that he put on a line here and there also made me prick up my ears — and not in a “Hey, that isn’t right!” way. Solid if not earth-shaking.

Rose Short (Team Gwen), “I Turn to You” — Grade: A | After telling her coach that her Christina Aguilera cover was dedicated to her, Gwen advised her to “just be that diva” that she is. I didn’t imagine that was going to be a problem! On stage, Rose belted some notes that were as gloriously round as bowling balls. And, as we know she can do, she just went bigger and bigger with the song till my TV’s puny speakers were crying uncle. There were some sound issues — I think more on the show’s technical end than on Rose’s end — but nonetheless, Rose blossomed, spectacularly.

So, what did you think of the Top 13’s performances? Vote for the singer who most impressed you below, then hit the comments with your reviews.