Tuesday’s episode of The Voice led seven contestants straight to a dead end on the path to victory as the Top 20 was whittled down to the Top 13. Based on your votes in Monday’s TVLine poll, Team Legend’s Katie Kadan was looking about as safe as safe could be (with teammates Marybeth Byrd and Will Breman, and Team Kelly’s Max Boyle also polling especially well). 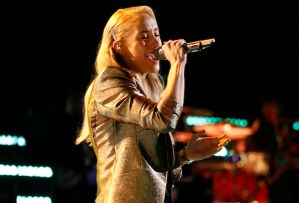 On the flipside, Team Kelly’s Damali and Shane Q probably should’ve already had their bags packed by showtime. Ditto Team Blake’s Cali Wilson, whose “Toxic” cover, in retrospect — you were so right, I was so wrong — was awful. Like, so awful, it made me go back and listen to Jackie Foster’s dicey Season 14 version just to wash out my ears.

I can only explain my extremely generous assessment of Cali as having been a combination of grading on the fly (letters are all assigned in the moment, so no time to reconsider until the egg’s already on my face), disappointment over teammate Ricky Duran’s performance (which had been dull, yeah, but not bad, certainly not by comparison) and an attempt to appreciate her stab at a unique arrangement. I should’ve tried harder to notice that that stab was the sonic equivalent of the kind you’d get on American Horror Story. 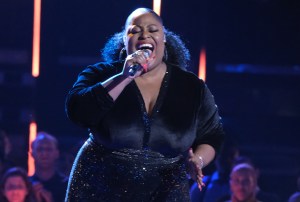 Your comments made me realize something else, too: Whether consciously or not, I’m always grading on a curve. I am actually harder on contestants that I really like, because I expect more from them (Ricky and Team Gwen’s Rose Short, for instance) than the ones I’m iffy on (and Cali definitely falls into that category — I wasn’t nearly as wowed as everyone seemed to be by her “Wicked Game” in the Knockouts). So it’s something I’ll be trying to keep an eye — well, an ear — on going forward. But (more than) enough prattling! On to the results…

SAVED BY THEIR COACH
Cali Wilson (Team Blake) — so apparently, her coach wasn’t that put off by her “Toxic”!
Myracle Holloway (Team Gwen)
Shane Q (Team Kelly) — and not Hello Sunday?!? Whaaaat?!?
Will Breman (Team Legend)

SINGING FOR THE WILD-CARD INSTANT SAVE

Gracee Shriver (Team Blake), “Landslide” — Grade: C | Unless you really loathed Gracee’s goat-y vibrato, this wasn’t half bad. At times, it seemed like the Fleetwood Mac classic might be in too low a key for her, but overall, decent. She even found a spot during which she could show off a little of the power of her voice. After she sang, her coach told her that he hadn’t saved her because he’d assumed she had a decent shot at winning the Wild Card… which had to have felt good on one hand (“He believes in me!”), crappy on the other (“Bastard was willing to sacrifice me?!?”).

Jake HaldenVang (Team Gwen), “There’s Nothing Holdin’ Me Back” — Grade: B- | Jake seemed a little looser in this performance than he had been Monday. And I do like his raspy voice, especially when he goes wild with it. Pryor Baird impressive, it ain’t, but still. On the flip side, something was holdin’ Jake back during his rockin’ Shawn Mendes cover, and it was the fact that he’d brought his guitar on stage. It kept him rooted in one spot, and a performance like this, I thought, needed to let him move, especially if he hoped to move viewers to cast a vote for him. 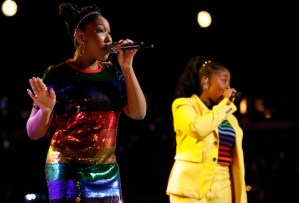 Hello Sunday (Team Kelly), “All by Myself” — Grade: C+ | Hello Sunday started off sounding a little nervous, and though they floated into sweet spots now and then, they were mostly all over the map. They had pitch problems, and their harmonies occasionally veered into screechiness. That said, there was one humongous note in there that I suspected might move the needle as far as getting them votes — it was impressive! The rest of their performance, not so much.

Alex Guthrie (Team Legend), “Stay” — Grade: C | For my money, Alex was the most polished of the foursome singing for the Wild Card. But this wasn’t his best performance (that would be his showing in the Knockouts that made us all sit up and go, “Who is that?”). Alex wasn’t bad here, but he wasn’t great, either, and as an underdog, he had to be great. Beyond great, even. “America needs to hear more from you,” John told Alex after he was done. Agreed. I just didn’t think that we were going to get to. Kinda shocked that Jake (?!?) gave my favorite of these performances.

So, what did you think of the results? Any shockers for you? Vote for the contestant you wish had advanced, but didn’t, below, then hit the comments with your reactions.