This week’s Watchmen nimbly accomplishes three feats. First, it educates the audience about a huge, traumatic event that happens at the end of the source material comic series and therefore greatly informs the world of the HBO drama. Second, it ever-so-slightly forwards the show’s A plot by letting us know exactly what was in Will Reeves’ pill bottle and revealing what the Seventh Kavalry is up to (and who’s helping them).

And finally, it takes us inside the mind of Det. Looking Glass. And that is a captivating — albeit sad — place, indeed.

Tuck some tinfoil tape into your hat and read on as we review the highlights of “Little Fear of Lightning.”

LOOKING GLASS’ ORIGIN STORY | In 1985-era Hoboken, a bus full of young Jehovah’s Witnesses in white collared shirts, dark ties and tan coats unloads around midnight. Their leader prays with them before sending them off into the “whore’s den” of a carnival near the waterfront. He calls one of the boys “Wade,” which reveals that we’re watching Det. Looking Glass as a kid.

Wade nervously wades his way through the crowd of people eating funnel cake and waiting to board the rides, finally approaching a group of guys who really don’t want to talk to him. They intimidate him until a girl in a leather jacket tells them to back off. She leads Wade into the funhouse, learning along the way that he’s from Tulsa but is in Jersey because “this is where the sinners are.” (Heh.) As “Careless Whisper” plays in the background, she pretends to seduce him, undressing him down to his socks. It’s icky — he repeatedly says he doesn’t want to do whatever he thinks she’s going to do — and it gets icky in a different way when she says, “F—k you, Bible boy,” and runs off with his clothes.

Wade, effectively naked and ashamed in a hall of mirrors, yells at himself for being so stupid. But then he hears a terrible sound and the walls shatter around him, knocking him out. He wakes up some time later, bleeding from the ears and very dazed. Nearly everyone outside, including the woman who stole his pants, is dead. “What happened?!” he yells, understandably freaked out in the extreme.

The camera then pulls back so far that we get a glimpse of New York City, which has just seen a massive squid fall from the sky. Buildings are crushed. A lot of people are dead. It’s chaos.

A DAY WITH WADE| Cut to the present. We learn that Wade’s cover day job involves watching focus groups and using the subjects’ facial expressions and such to tell the interested parties what people really think of their ads/products/etc. Essentially, it’s the same thing he does in the pod, just not with the 360-degree video screen. Once he arrives at the precinct, Angela demands that he press his ex about what’s in the pills. And then Laurie calls him into her office: She’s bugged a plant on his desk, so she wants to know all about what Angela means.

Through their conversation, we learn that the traumatic squid fall is now referred to as “11/2,” the same way we refer to the terrorist attacks on the World Trade Center as “9/11,” and that Hoboken’s proximity to NYC put it square in the “psychic blast zone.” Apparently, those who were in that zone and survived have had a rough time of it ever since. We also learn that Wade joined the force just after the White Night. “Justice needed to be applied,” he drawls by way of an answer. (Side note: Blake continuously refers to him as “Mirror Guy” throughout this exchange, and it’s hilarious.) In other news: Blake tasks the Tulsa police force with finding the church where the Kavalry filmed the video, hoping it’ll lead to the racist scumbags themselves. 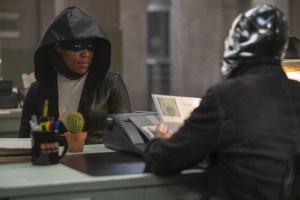 Regardless, he’s interrupted by a loud alarm: It’s his Extra Dimensional Security system, and it’s apparently not working right because he tests it way more often than the company recommends. Wade calls and yells at a customer-service agent, then goes to sleep in his fallout shelter with the Looking Glass mask pulled down over his face.

Later, his ex-wife Cynthia texts him to “come get your pills” at the pet-cloning facility where she works. She’s remarried and seems very normal, though I may never forgive her for the casual way she offs a cloned pup who’s slightly smaller than it’s supposed to be. She can tell that he’s more anxious than usual, and she does seem to care for him, but all she tells him is that the pills are something called Nostalgia, which is outlawed “because it turns out putting memories into pill form led to psychosis.”

WADE MAKES A FRIEND | Wade winds up at a support-group meeting for those suffering from extra dimensional anxiety related to the squid attack of 30 years before. He’s a long-time member who offers this perspective: If the marine life hadn’t crushed the Big Apple back then, they’d probably all have died because the Soviet Union and America were at the brink of nuclear war. The squid, he points out, “united us against a common threat.”

Afterward, a female newcomer to the meeting scoffs a bit about the group’s mission but says he can join her for a drink. He does. They commiserate about their shared fear, and she winds up kissing him outside. Wade is so into this woman he just met, but when her friend comes to pick her up, Wade is horrified to realize that the man is driving the same truck — still full of lettuce! — as the Kavalry member who shot the cop in the series premiere. So he gets in his car and follows them.

Outside an abandoned shopping mall, they don Kavalry masks and enter the building. Wade radios for backup and then goes in himself with a gun he finds in the truck’s front seat. Inside, he finds a setup that is the “church” in the video… and then he finds something truly mind-bending. “Are you opening portals?!” he cries, gun drawn at a group of Kavalry members standing near something that looks like an interdimensional door.

THE TRUTH ABOUT 11/2 | But the joke’s on Wade: The entire evening was designed to bring him into the fold. They know he’s Looking Glass. The gun he found is full of blanks. And when he radioed for help, he was actually talking to some Kavalry members who’d stopped his signal from getting back to the precinct. He’s wrestled into a chair in front of a wall made of video screens, and then a man whose voice Wade recognizes as Sen. Keane’s (!) removes his mask.

Keane genially says he’s not a murderer, but that he and Judd are/were involved with the Kavalry to “maintain the peace.” Wade doesn’t believe him, adding that the portal in the other room is very similar to the one “they were playing around with in [New York City’s] Herald Square on 11/2.” Keane confirms that… adding “We’re gonna do something new.”

The senator says he’ll show Wade something that’ll set him free from his fear, and “In return, I’m going to ask you to do me a favor. Call it a squid-pro-quo.” He wants Wade to help the cops arrest Angela so she’s out of Keane’s way; otherwise, he vows, the Kavalry will kill her and her family. “Your call, Wade,” he says. “Either way works for me.”

Then Keane cues up a pirated tape he acquired as a member of the Senate Appropriations Committee, and leaves Wade alone to watch it. The footage is of Veidt, directly addressing the camera on the night before the squid attack in 1985, talking to President Redford… whose 1992 election he apparently put into play way back then. There’s a LOT in this video, and sorry to Wade’s brain for the shock it’s going through, but here’s the most important thing: Veidt says that he masterminded the seemingly random interdimensional attack to stop the nuclear holocaust by uniting humanity against a common fear. He calls it “a hoax to save the world.”

What does Wade choose? He goes back to the precinct, tells Angela about the nostalgia while basically speaking directly into the bugged plant, and then watches her frantically swallow all the pills herself as uniformed officers and Blake cart her away. Much later that night, a Kavalry van screams up his driveway and four armed, masked men get out and head toward his house. 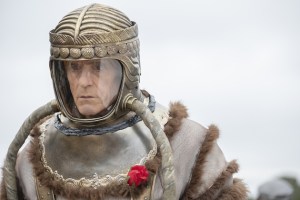 ONE SMALL STEP FOR MAN | In England (?), Veidt dons the suit and has the Phillips and Crookshanks clones launch him into outer space. He lands on the moon (?) and uses the corpses of all the servants he’s sent up there prior to spell out “Save Me” and then something that starts with “D” that we can’t see in full. “I did it!” he rejoices — and then he’s yanked back to Earth via the cord on his back. A man with a pencil mustache calling himself the warden of the land rides up on horseback, puts Veidt under arrest and kicks him in the face. Adding to my confusion: It appears that Tom Mison is playing this character, as well?