Warning: The following contains spoilers for Sunday’s episode of The Walking Dead. If you’d rather watch first, read later, make like a walker and lurch away.

Toward the end of Sunday’s The Walking Dead, we kinda saw it coming. But Siddiq? Not so much, even though the Michael Cudlitz-directed “Open Your Eyes” followed the show’s tried-and-true pattern of killing off characters: Suddenly play them more heavily than ever before, attempt at the last second to get us extra-invested in them, then… bam. How did the last friend Carl ever made go to his grave? Read on and find out. 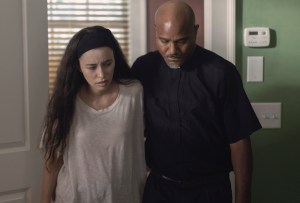 ‘YOU’RE MY FRIEND’ | Throughout the hour, Siddiq continued to struggle mightily with the PTSD that had made a wreck of him since he saw Enid, Tara, Henry & Co. beheaded by Alpha and the Whisperers in Season 9’s penultimate episode. He even seemed to be contemplating killing himself, going so far as to jump into a body of water, only to be pulled out by a “nice and pasty” Rosita (who, sick as she was, should’ve been far too weak to rescue him, no?). As the co-parents dried off, she got her “other other man” to open up about his survivor’s remorse and the fact that he couldn’t stand being around Dante, because his presence reminded him how much he missed Enid (which might have resonated more, had his friendship with her ever been played as more than way-in-the-background, at best). Rosita was busy telling him that he had to fight the noise in his head when he realized that the common denominator between all of the sick folks was that they drank from the same water supply… for which, in Eugene’s absence, he was responsible. (Why only some people became deathly ill — RIP, Cheryl — and others appeared to remain perfectly fine mystified me. Anyone else?) 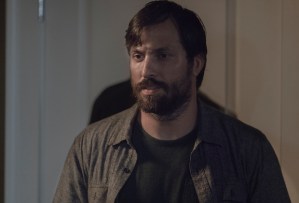 That night, Dante approached Siddiq to apologize for not pitching in with the water. The new guy also spoke warmly about what a special place Alexandria was, in part because when one of them was suffering, the rest were there to help. Then he made a clicking noise with his mouth, one that triggered a new wave of flashbacks in Siddiq and reminded him that the Whisperer who’d held him still as his friends were killed had made that same sound. Dante was a secret Whisperer! Of course, Siddiq wouldn’t get to tell anyone that his “friend” was really their enemy, because in the closing moments of the episode, Dante choked him to death. “I didn’t want this,” he sputtered. “Not you, not like this… ” And yet he did it, anyway. 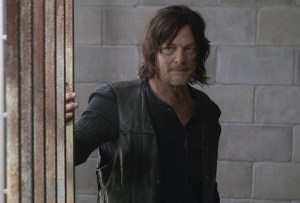 ‘YOU FIGHT FOR WHAT… SANDWICHES?’ | In other developments, Lydia suggested to Carol that if she showed her Whisperer hostage the kind of lives that they were able to lead in Alexandria, it would be more dangerous to Alpha than a war. The realization among the Whisperers that they didn’t have to live like stinky animals “would spread, and there’s nothing my mom could do to stop it.” So Carol gave it a shot, playing nicely with the Whisperer… until he spat his jam sandwich in her face, refused to disclose the location of the horde and volunteered that “if we were out there, I would take you like a bitch in heat.” At that, Carol slipped on her ring and wailed on him for a bit, then let Daryl threaten to take the prisoner’s fingers, ears, teeth… the works. Despite all that, the prisoner still wouldn’t talk. Well, except to say that Alpha loves her minions. Hell, she even sacrificed her own daughter for them! Hearing that that was what he believed, Carol immediately wanted to break him by showing him that Lydia was alive and, aside from some leftover wounds and an understandably glum demeanor, well. But she never got to, because the fellow soon took violently ill and croaked. It seemed that when Dante had been treating him earlier, he’d “unwittingly” given him hemlock. Still, Carol thought that Lydia could be of use. To that end, she took Alpha’s daughter “hunting”…

Meanwhile, Aaron kept chatting up Gamma… well, as best he could. Talkative, she wasn’t, even when she was supposed to be pumping him for information. At one point, though she’d lied that she was an only child, she almost slipped and admitted that she’d had a sister, which set off Aaron reminiscing about his late brother. He knew that she was expected to find out whatever she could from him, and he should probably do the same with her. “But what’s the point?” he asked. “So maybe we talk about nothing worth reporting.” Unsettled, Gamma took off muttering the Whisperers’ mantra. Later, Alpha warned her that Aaron would use her sister against her if he could, and lashed her arm as a reminder to be strong. That night at her and Aaron’s usual meeting spot, Gamma, her leader’s message received loud and clear, managed to get a knife to Aaron’s throat in order to question him. Just then, Carol approached, crossbow drawn… and right behind her… Lydia. As Gamma ran away, shocked to her core, Carol explained to Lydia, “Your mother told her people that she killed you.” In other words, Carol had only brought Lydia out there with her in order to get word back to the Whisperers that Alpha was a lying hypocrite. “You’re just like her,” Lydia told Henry’s mother. And since Carol was so determined for Lydia to take a side, she would — her own. With that, she slugged Carol and took off, the only person in the woods who could’ve been almost as disillusioned as Gamma.

So, were you surprised by Siddiq’s death? Did you, too, feel that he was sort of an underdeveloped character? (His friendship with Enid and even his fling with Rosita were played off screen.) Hit the comments with your thoughts.