Readers of The Walking Dead comics have known since the Whisperers were introduced that they should be bracing themselves for Sunday’s episode, Season 9’s penultimate. But even they couldn’t have guessed, given the series’ habit of diverging from Robert Kirkman’s source material, whose noodles Alpha would use to mark her territory as the Kingdom’s fair got underway. Read on, and as the, uh, stakes are raised, I’ll reveal which characters lost their heads. 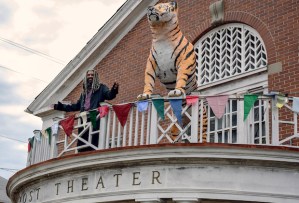 ‘WE GOT A LOTTA LOST TIME TO MAKE UP FOR’ | As “The Calm Before” began, we flashed-forward through a few years with a couple of nice Hilltoppers who, in the present, were murdered by Alpha; the Whisperers’ leader even scalped the woman to use her pretty blonde hair as a disguise when she infiltrated the fair. Speaking of the social event of the season, it kicked off with Ezekiel doing some speechifying from the Kingdom’s theater balcony — here a Rick shout-out, there a Carl shout-out — while a papier mache Shiva looked like it might take a flying leap at any moment. Once the King’s Evita moment was concluded, he and Carol went back to fretting about Henry’s whereabouts… just long enough for the boy to arrive with Daryl, Michonne, Connie, Lydia and my favorite character, Dog. “You can’t ever run away like that again,” Carol told her son, leaving him linguistic wiggle room to run off some other way (not that that would be an issue for long… dun-dun-dun). When Ezekiel expressed his surprise and delight at Michonne’s change of heart about coming to the fair, she joked, “I was in the neighborhood.” But seriously, they needed to gather all of the communities’ leaders, and fast. 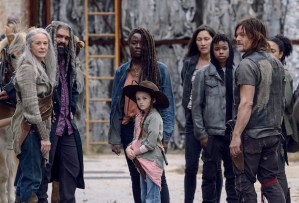 At that powwow — attended by the Kingdom’s monarchs, Alexandria’s Michonne and Gabriel, Hilltop’s Tara and Oceanside’s post-time-jump Rachel (who you may remember as the kid who always wanted to kill everybody) — the preacher revealed that his community’s council had voted to grant Lydia asylum. Which was all well and good for Alexandria, Tara noted, because it was Hilltop against which the girl’s mother was gonna retaliate. Michonne understood — hell, she’d even encouraged Lydia to run away, she admitted. But they’d all been mistrusted at some point or other. And though “Lydia didn’t choose where she came from… she chose where she wanted to be.” Fine, fine. But they still needed to send fighters to protect the Hilltop. Agreed, said Michonne. “The four communities have to present a united front,” letting Alpha know that if she messes with one of them, she messes with all of them. To seal their mutual protection pact, Ezekiel suggested that they sign Michonne’s charter — the one that Tara had stolen from Alexandria. One by one, they scribbled their autographs — even “Queen Carol.” When it came time for Michonne to affix her moniker, she offered the pen to Gabriel, saying that it was only right that the agreement be ratified by the head of Alexandria’s council. (Foreshadowing, anyone?) 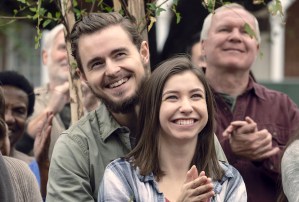 ‘ANY GOODBYE COULD BE THE LAST’ | Outside the theater, the fair was hoppin’. Though the idea of splitting a box of popcorn with Henry when Hilltop was in danger seemed frivolous to Lydia, it seemed altogether wondrous to Ezekiel and Carol. “Our son is taking a girl on a date to the movies tonight!” they marveled. Nearby, Luke enlisted Enid to help convince Alden to join him on stage. Go on, “I wanna hear my crooner boyfriend croon,” she said, marking the first time he’d heard her refer to him as her boyfriend. Significantly less chipper was Kelly, who admitted to Connie that she was upset about her disappearing act. “You are my sister,” Kelly signed. “But you just ran off.” The Whisperers’ willingness to sacrifice a baby had brought up feelings that Connie had thought she’d dealt with (yet hadn’t), she replied. And with that, all was forgiven. Shortly, while Addy flirted hopelessly with Henry, Rodney and Gage tried to intimidate Lydia away from their friend’s crush. (And next week on Riverdale… ) 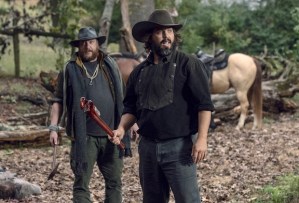 Soon, the time arrived for reinforcements to set off for Hilltop. Among them were Daryl, Carol, Magna, Yumiko, Dianne and Marco (and big props if you could pick those last two out of a lineup!). Before departing, Daryl entrusted Dog to Connie — and damn near smiled as he waved goodbye to her. (Oh yeah, Daryl is so in lurve!) Carol encouraged Ezekiel to enjoy the fair for which he’d worked so hard, but alas, “I won’t enjoy anything until you’re back,” he said. And could that gate closing as Carol waved goodbye to Ezekiel have been any more ominous? Anyway, it seemed as if the warriors had scarcely left the Kingdom when they happened upon the Highwaymen at the site of the Whisperers’ murder of those nice Hilltoppers. As the group split up in hopes of finding survivors a la Alden and Luke, Carol agreed to pay the Highwaymen overtime in the form of movies, and Yumiko (who was sticking with Carol, Daryl and Michonne) and Magna (who was headed straight to Hilltop) shared a kiss, confirming the romance that comic-book readers have known about all along. 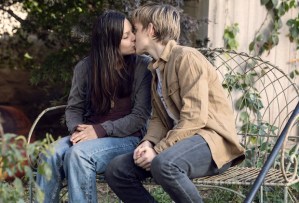 ‘NO ONE ELSE HAD TO DIE’ | After nightfall, Daryl realized that his group had been led into an ambush, but it was too late. First, he, Carol, Michonne and Yumiko had to take out a bunch of walkers, then they found themselves surrounded by Whisperers. “You just had to give me the girl,” sighed Beta. “Now that deal… is done.” Flashing back then to daytime at the Kingdom, Rosita assured Eugene, who was using ham-radio parts he’d acquired at the fair to try and set up a rudimentary telephone system between the communities, that nothing had to change between them — they could still talk. As if that was what her unrequited love wanted. Meanwhile, Tara was champing at the bit to get back to Hilltop. “I want them to know they have a leader who shows up for them,” she told Gabriel. When Henry caught up with Lydia, who was all but shivering as usual, he reassured her that he didn’t like Addy, he liked her, and they shared a couple of kisses. At the same time, a bewigged Alpha was eavesdropping on all the conversations that she could when Ezekiel bumped into her. “You can call me Debbie,” she said before asking to be pointed in the direction of sweaters. “I have a feeling it’s gonna be a hard winter.” When the evening’s feature presentation got underway, both Ezekiel and Henry were missing. But the seat next to Lydia’s wasn’t empty for long; her mother soon took it. 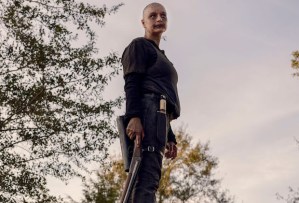 From there, we cut back to the woods, where Alpha told Daryl, Michonne, Carol and Yumiko that Lydia was no longer a concern. (Honestly, the timeline here confused even me; how fast could she get from the movie theater to the woods?) “She was weak,” said the villainess. Wait, was?!? Rather than answer that question, Alpha took Daryl for a walk that apparently went on until past dawn, because it was daylight again by the time she showed him a massive herd that her Whisperers could direct toward any of the civilized communities at any time. To ensure that his people never again crossed over onto their turf, she’d marked the border. With… ? “You’ll see it as you leave,” she said in a way that implied a malevolent laugh. Had she killed Lydia? Daryl asked. At that, we flashed back to the fair and a mother/daughter confrontation in which the teenager noted that, all she had to do was scream, and people who actually cared for her would render her an orphan. But she wasn’t going to do that; she just wanted Alpha to leave. “I’m giving you a choice,” said Lydia, “which is more than you’ve ever given me.” Miraculously, Alpha left her daughter with a pulse. Back in the present (?) with Daryl, the psycho told her captive, “I don’t think you can protect my daughter. But I hope I’m wrong.” Oh, “you are,” he replied before being sent off to rejoin his group. Later, Alpha told Beta that she wanted to be left alone, then murdered the Whisperer who caught a glimpse of her shedding real, human tears.

‘THEY DIED AS HEROES’ | As Daryl left with Michonne, Carol and Yumiko, they found Siddiq tied to a tree. In hysterics, he led them to Alpha’s border wall, which was lined with stakes, atop each of them another head: those of Highwaymen Ozzy and Alek, DJ, Frankie, Tammy Rose, Addy and Rodney, and then our more prominent players, Enid, Tara and finally Carl 2.0, Henry. Later, Siddiq addressed the communities that had gathered at the fair. “I think [Alpha] left me alive to tell you that story, to scare you and drive us all apart again,” he said. “But I wanna tell you a different story” — one of heroism, in which even strangers fought together as if they were family. “We have to keep going, for them and for all of us,” he concluded. “We need to honor them.” Apparently months later, because I’d swear there was snow beginning to fall, Daryl visited the spot where the heads had been affixed to their stakes with Lydia, and she left at the base of Henry’s pike her Hilltop medallion. So, your reaction to the big heads-on-a-stake scene? Anyone you cared about enough to be sorry they were beheaded? Were you relieved that Ezekiel and Rosita were spared their comic-book fates?