Good and evil awaited Judge Gen’s ultimate verdict on humanity in a pivotal episode of The Good Place — but her answer isn’t the end of the story.

With the experiment officially in the books, the gang gets a visit from Matt the accountant, who says the results won’t be revealed until they’re in the judge’s chambers. (The test subjects, including Chidi, are frozen stiff in the meantime.) Michael has to go in alone and face down Shawn as Judge Gen arrives and the results are read out via a “Who Got Better?” slot machine. Simone, Chidi and John all became substantially better people during the experiment… but Brent got 1 percent worse. Shawn crows in victory: Humanity really is a collection of “mobile turd factories,” as he puts it. 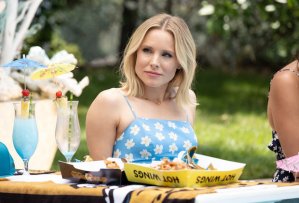 While they await the judge’s decision, Eleanor and the others pass the time by throwing each other the funerals they never got to have on Earth. Tahani’s funeral takes place in the cabin of a private jet, natch, while Jason’s takes place poolside. (“There’s a Jacksonville tradition of having your funeral where you were born,” he explains. “I got born in the deep end of a pool right after my mom did a cannonball.”) They also prop up a frozen Chidi next to them, Weekend at Bernie’s-style, so he can join in — but when it comes time to eulogize him, Eleanor can’t even find the words to sum up what he means to her. Aw.

In the courtroom, Michael frantically points to how much all the other humans improved, while Shawn smugly points to Brent and his 1 percent decline. He gloats and says Michael’s trip to Earth with the humans was a waste, but that gives Michael an idea: He calls up the files of other humans like Tahani’s sister, Eleanor’s mom and Jason’s pal Pillboi and points out how much they improved as human beings after the visit. And even Brent was way worse until just minutes before the end of the experiment, when his ethical development suddenly spiked. That shows that humans can improve, Michael argues, and no one is truly unredeemable.

Judge Gen is convinced: She declares that Michael is right, and the afterlife’s point system is flawed because even the worst humans can always get better. Michael and the humans celebrate until the Judge adds: “Obviously, Earth is cancelled.” Yes, she decides that it’ll be easier to just start over from scratch, so all humans alive and dead will be extinguished and they’ll try this whole “human race” thing again from the top. She fishes around in her purse for the device that’ll wipe out all of humanity and finds it — it looks a lot like a garage door opener, to be honest — but when she’s about to press the button… it vanishes! 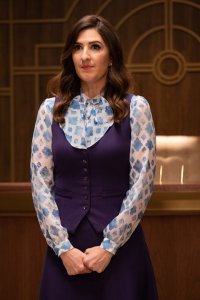 Surprise! Janet whisked the device away to her void, and when a furious Judge Gen goes there to find it, it’s gone. That’s because Bad Janet actually has it. (She read Michael’s manifesto! She’s on the good guys’ side now!) And she has all the Janets onboard — including Disco Janet! The Judge is forced to search all of their voids for the device, which buys the gang a little time to come up with a plan. Michael thinks they need to create a new system for judging humans… and who better to do that than the still-frozen Chidi? The episode ends with Eleanor ordering Michael: “Wake. Him. Up.”

* Janet telling Jason that, at his funeral, “your friends didn’t say things about you so much as they graffitied a Red Lobster about you.” Jason: “Yeah, in Jacksonville, that’s the first stage of grief.”

* Eleanor recalling that Tahani taught her that “bras shouldn’t be painful. And you don’t buy bras at Home Depot. And they don’t sell bras at Home Depot: ‘What the hell were you wearing?’ For the record, it was a men’s back support harness, and it worked in a pinch.”

* Hey, we learned why Chidi has such an inexplicably ripped body! “When he was 14,” Eleanor explained, “someone told him that exercise alleviated anxiety, and he started doing push-ups and basically never stopped.”

* Judge Gen pushing her idea for a reboot of Ally McBeal: “Everything else is getting rebooted. Get a young hottie in there. Like a Zendaya type… Who wouldn’t watch that?” (Shawn, by the way, knows it’s pronounced Zen-DAY-ah.)

* Jason revealing that he lost his mom to “the Big C”: “That’s what we called the crocodile that lived by my house. Aw, I’m just playing, it was cancer! Watch me do a handstand!”

* Michael, after realizing that the total number of humans who’ve improved matches the number of friends on Friends: “Are you going to sit there and say that every single Friend belongs in hell? I mean, maybe Ross and Rachel. And Monica and Joey. And definitely Chandler… but Phoebe?”

* Eleanor’s final wishes for her funeral: wearing a “Dead AF” tank top, and clutching a jug of margarita mix.

* Janet, after defying the Judge: “I don’t say ‘no’ a lot. Did I pronounce that right?”

* Bad Janet confessing that she read Michael’s manifesto… while on the toilet: “I don’t have to poop. I choose to.”