The last few minutes are ticking away on The Good Place‘s grand experiment this week — so is humanity saved, or doomed?

It’s the final day of the experiment, but Eleanor is nervous and wants to do one last “point grab” before the clock strikes midnight. Tahani is throwing an elegant party to celebrate the neighborhood hitting the one-year mark… and Michael is suddenly into magic? (We do like his magician name, though: The Magnificent Dr. Presto!) But there’s trouble brewing: As the four humans get ready for the party, Simone shares with them a crazy conspiracy bulletin board she’s been working on. She suspects there’s something very wrong with the neighborhood — and her suspicions only grow when John blabs that “Jianyu” is really Jason. 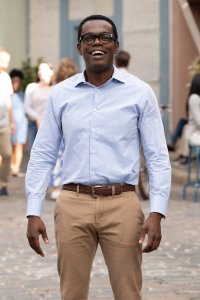 While Chidi and Simone snoop through Eleanor’s office for evidence, he tells her he still trusts Eleanor… because Eleanor told him that he and Simone are soulmates. (They are calling each other “muffin” and “duckie” now, after all.) But Simone rejects that. She doesn’t even believe in the concept of soulmates… which pretty much breaks poor Chidi’s heart. But she does stumble upon Eleanor’s whiteboard, with photos of the four humans under the “party guy” emoji. She’s now convinced something is up, and in a last-ditch attempt to save the experiment, Michael does some magic at the party and invites Brent up to participate… when a giant sinkhole opens up and swallows Brent.

He’s still alive, but clinging precariously to a rock wall, and Michael reveals he wanted to put Brent in danger to see if the others would band together to save him. It helps that he’s a jerk, Michael adds; they couldn’t put something worth saving down there, like a box of donuts. (Eleanor decides that Brent is actually the opposite of a box of donuts. “A toilet full of broccoli,” Jason offers.) But it doesn’t work: Chidi wants to save Brent, but Simone thinks they’ve given him enough chances to be decent and he’s failed them all, so she and John leave him dangling. Chidi tries to save Brent himself… but ends up falling in and dangling from the rock wall himself. (Classic Chidi.) 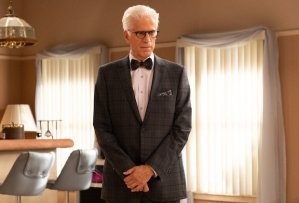 Michael has one final ace up his sleeve, though: He and Eleanor rescue Brent and Chidi and bring them back to Eleanor’s office, where they bicker before Chidi declares that they’re actually in the Bad Place. Cue the evil cackling laugh from Michael… and from Eleanor! They tell Chidi he’s right, and he and Brent are headed somewhere much, much worse before leaving them alone to contemplate this. Brent freaks out at the news and calls Chidi his “only real friend,” which causes Chidi to unload on him about what a selfish jerk he’s been. “You are a bad person,” he concludes, and Brent looks sincerely chastened as he starts to tell Chidi, “I am so, so sor—”

But he’s cut off: The experiment ends, and he and Chidi vanish in a flash of light. Did the experiment succeed? We still don’t know, but Janet arrives promptly with a pitcher of margaritas, as Eleanor requested, and Eleanor just chugs straight out of the pitcher. Save some for us!

* Jason remembering the day in the Good Place when everything was made of chocolate: “That day was awesome! I had a Reese’s Peanut Butter Cup, it was all chocolate!”

* Tahani noting that the party will be “London black tie”: “That means Knightsbridge black tie, not Kensington. Or heaven forbid, West Brompton! Can you imagine?” (Jason cannot, for the record.)

* Janet warning that “just after midnight, in order to reset my processing power, I will be violently eating my Janet babies. I’d advise no one look directly at me.”

* Eleanor’s idea on how to deal with the crisis: “We do nothing. We hope that our early successes make up for the embarrassing mess we’ve become. Like Facebook. Or America.”

* Michael, during his unimpressive magic act: “Can you make them clap harder?” Janet: “They see what they see, man.”

* Eleanor calling Chidi “a brilliant, kind person, with a caboose you could bounce a quarter off of — and I know, because I’ve done it.”