One Good Place resident unveiled a freshly penned novel this week… but the early reviews were less than heavenly.

Michael visits an imprisoned Bad Janet and bores her with the latest news from the experiment: Eleanor and the gang are encouraged by the four humans’ progress, especially Brent, who’s at least acting more ethically, even if it’s for selfish reasons. But he’s still a jerk, as we’re reminded when he proudly passes out copies of his new book, a spy novel-slash-murder mystery-slash-golf tutorial titled Six Feet Under Par: A Chip Driver Mystery. It’s terrible, of course, and offensive to boot: There’s a character clearly based on Tahani named (ugh) Scarlett Pakistan, and Chidi is also miffed that he’s portrayed in the book as an overly rigid killjoy. Jason tries to help him loosen up with a spontaneous dance party, and John stumbles in on it… and now the biggest gossip in the history of humanity knows that Jianyu is really Jason. 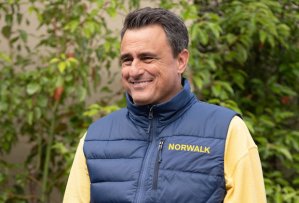 Brent asks Simone and Tahani for their honest — read: glowingly positive — feedback on his book, but they can’t stop giggling about how awful it is. (“He solves the murder on Page 10! What is the rest of this book about?”) Eleanor tries to talk Simone into playing nice with Brent, but she refuses, and doesn’t understand why they have to put up with jerks like him in the Good Place. (Great question, actually!) Meanwhile, Michael joins Brent on one of his golf outings and tries to nudge him in the direction of accepting his own shortcomings without flying into a rage whenever they’re brought up. Which would come in handy pretty soon, in fact!

At Brent’s book release party, while John struggles to keep the truth about Jason to himself, Brent confidently asks the others what they thought of his book. They start out diplomatic, but then Simone calls him out for the thinly veiled Tahani character, and he throws a tantrum, whining about being “yelled at by the PC police” and abruptly cancelling the party. Michael talks him into apologizing, but he just does the whole “I am sorry if you were offended” routine, and when Simone fights back, he calls her “a condescending bench.” That leads to a scuffle with Chidi that ends with him punching Brent’s lights out. Not sure if that was strictly ethical… but it damn sure was satisfying. 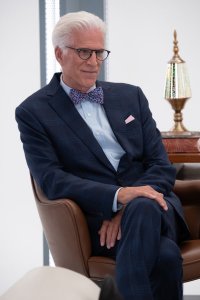 It all looks pretty bad, but Michael explains to Bad Janet that it actually ended well: Eleanor is officially out of ideas, but when Jason volunteers to set himself on fire so that Brent will put him out, a light bulb goes off over her head. She thinks they just need to force Brent to help someone without thinking about it, and they brainstorm exactly how to do that. The eventual plan doesn’t even matter, Michael says, and neither does whether humans are “good” or “bad.” What matters is that “they’re trying to be better today than yesterday.” In that spirit, Michael sets Bad Janet free and sends her off with the manifesto he and Janet wrote about the humans’ entire ethical journey. Hmmm… but what happens when that manifesto inevitably ends up in Shawn’s hands?

* Chidi gushing after a group ski trip: “I couldn’t actually go skiing because moving at an angle terrifies me, but that lodge had so many reading nooks! Just everywhere you look… nook!”

* Brent’s book describing the Tahani character as having “an accent like the Queen of England, but without any of the old gross face parts.” 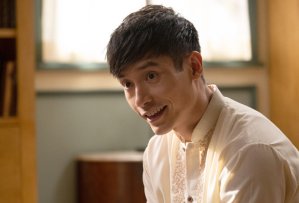 * Jason: “Almost everything I did on Earth, I did without thinking or worrying about what would happen. That’s how I got my nickname: The Defendant.”

* Jason’s original dance track, titled “I’ll Love You Forever (Make That Booty Bounce in the Back).” “Fun fact: The police sirens in the background are real. I was being chased as I recorded it!”

* John complaining that the Good Place neighborhood is “a little Season 4 of Downton Abbey: beautifully designed, but a real snoozefest.”

* Tahani, on John’s book: “I’ve definitely never seen the word ‘pants tent’ used so many times.” John: “Yeah, I kinda just felt like, in that moment, that’s what the Surgeon General would say.”

* Tahani hoping that Simone will handle this Brent thing “the British way: smile bravely, bury your feelings and allow a steady drizzle to slowly wash away your sadness over the years.”