Michael stared evil right in the face this week on The Good Place… and that face looked a lot like his, actually.

He and Jason head down to the Bad Place determined to rescue Good Janet, who’s being held captive down there following last week’s Janet switch. But there’s another Michael down there already: Vicky, who’s still working out the kinks of her Michael skin suit. (Her evil laugh is way off.) They stumble in on Shawn addressing a room of demons at Demon Con and pushing for ways to freshen up their torture methods. So Michael waltzes on stage and heckles Shawn, posing as Vicky in a Michael suit, and introduces Jason as Glenn the demon in a Jason suit. Shawn examines Jason and thinks they “went a little overboard on the cheekbones,” but otherwise, he’s fooled. 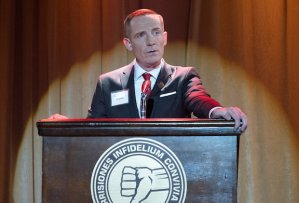 Michael and Jason volunteer to head down to the prison cell and torture Janet, but Shawn has a better idea: Let’s bring her on stage and torture her right here! He summons Janet, and Jason professes his love for her, which makes her burst into tears. But then another Michael walks on stage… uh-oh. It’s Vicky, who unzips and proves it’s really her, forcing Michael to confess. He insists to the crowd that “humans are capable of self-improvement, and so are we,” but when that doesn’t work, he uses Janet’s demon exploder on a bodyguard and then Vicky, and the three of them hightail it out of there, bound for the Good Place. 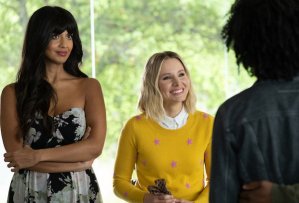 MISTAKE BY THE LAKE | Back in the neighborhood, Eleanor plans a lake house getaway for the four humans to help them bond and evolve together, but Chidi stays home to read. (Typical Chidi.) Even worse, Eleanor left Derek in charge while she was gone — a pretty horrible decision, to be honest? — and when she gets back, the residents are all flailing around like malfunctioning robots. So she and Tahani make up a puzzle game to distract Chidi while they try to clean up Derek’s mess. Luckily, he loves puzzles! Unluckily, Tahani promises he’ll learn “the answer to the truth about the universe” if he solves it. Oof.

While Chidi hunts for clues, Tahani orders Derek to reboot himself so he’ll be smarter and better able to handle this situation. When he does, though, all of the residents drop dead, too. So Eleanor is forced to blindfold Chidi, Bird Box-style, and carefully walk him through the neighborhood and lead him to the lake house. He happily kisses Simone upon arriving… which elicits a grimace from Eleanor. But Tahani is still beating herself up for not really helping; she wants to learn how to do something meaningful and fulfilling with her life. Wow… don’t look now, but Tahani might actually be turning into a better person?

* Janet, after Vicky complains that she still needs to figure out Michael’s motivation: “It actually feels more like torture when you discuss your acting process.”

* Derek, after Eleanor puts him in charge: “I wasn’t technically designed for this… but to be fair, I wasn’t designed for anything.”

* Chidi’s excited “oohs” while being presented with a puzzle: “I love puzzles! They’re so much fun, but they’re also like homework. Win-win!”

* Shawn lamenting how old tortures lose their spark after a while: “Sure, the first time someone gets butthole spiders, he’s miserable. But then the humans get used to it, and worse, the spiders get bored.”

* Chidi pointing to a plush leather chair and admitting that “my comfort zone is basically, like, that chair. And honestly, the arms are a little sharp.”

* Shawn: “What in the name of Kevin Spacey’s self-made Christmas Eve video message to try to get back on House of Cards is going on here?”

* Tahani, after Eleanor admits she wouldn’t know how to throw a party and where to put “the whatever spoon”: “The whatever spoon is really only used for certain festive jellies.”

* Jason, after Janet confirms that the Jaguars cut his beloved Blake Bortles and replaced him with Nick Foles: “Nick Foles? Are you kidding me?… He won a Super Bowl! We’re gonna be unstoppable!” Plus, at the very end, Janet added sadly (and accurately): “Oh no… Nick Foles just broke his clavicle.” We bet Jason would love Gardner Minshew, though.