Someone’s not who they say they are on The Good Place this week — and the lying might be coming from inside the house.

Eleanor leads the gang in a rousing game of Pictionary, where their drawings come to life… even Chidi’s terrible drawing of Simone’s childhood pony, which is a truly grotesque creature. But Eleanor worries they’re still not making much progress on Brent, who’s just getting drunk and being an ass, and pushes her pals to come up with a fresh plan. Michael, though, thinks they should just forget about it and have a slumber party. Hmmm. Just then, that hooded figure from last week finally arrives at the Good Place train station: It’s Glenn, one of the demons from the Bad Place. He announces that Michael isn’t really Michael — he’s Vicky the demon in a Michael suit! 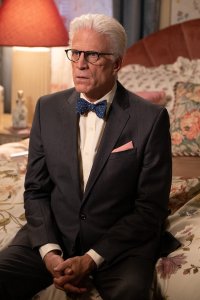 Michael insists he’s not a fraud, and Eleanor believes him, but Glenn does make a convincing case: He’s tired of being bullied by Shawn, and he even helped make the Michael suit. (The switch from real Michael to fake Michael supposedly happened when they loaded Chris the demon onto the train.) Plus, Michael admits he never told Eleanor and company about the suit, even though he knew about it. Glenn thinks they should bring the evidence to Judge Gen, but Eleanor worries she’d just reset the experiment and they’d have to start from scratch. Michael keeps pleading his innocence, but he’s caught in another lie when he confesses he did really have that nervous breakdown when he first saw the Michael suit; he didn’t fake it for Eleanor’s benefit. Yikes. Vicky, is that you in there?

They decide to rip off Michael’s skin suit to see what’s really underneath, but he’s the only one who can take it off. (“It’s like a very complicated bra,” Janet explains.) Michael refuses, saying that his true form is a six thousand foot-tall fire squid, and revealing it would ruin the experiment. Luckily, Janet has fashioned a demon lie detector and points it at Glenn… but when she does, he explodes in a burst of blue goo. Oops. (Don’t worry about Glenn, though. The goo will reconstitute itself into demon form. Eventually.) Michael says that solves everything… but Eleanor isn’t so sure. 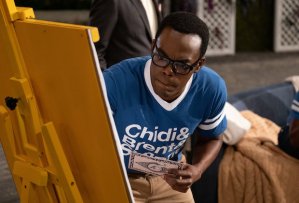 She turns to Chidi, who’s still frantically practicing his horse drawings, and the two share some quality time together over a delicious plate of nachos. Eleanor comes back with a decision: She’s going to Judge Gen and rebooting the experiment, because she can never really trust Michael. As a last resort, Michael volunteers to blow himself up with Janet’s lie detector, so the experiment can continue. But before he can, Jason slaps a pair of magnet handcuffs onto Janet… and we find out she’s really Bad Janet in disguise!

Jason figured out she wasn’t really Janet because he told her earlier, “I’m here for you, girl”… and she didn’t immediately respond, “Not a girl.” (Check out the big brain on Jason!) So Bad Janet is the real impostor: She marbleized Good Janet during the train exchange and took her place. Eleanor thinks Michael’s offer to sacrifice himself proves he’s the real deal… but what about Janet? Bad Janet says she’s down in the Bad Place, and Jason vows to bring her back — and to punch that bully Shawn in the face while he’s down there. So he and Michael head to the Bad Place with Glenn’s goo in tow. Godspeed, you Jacksonville dirtbag.

* John quickly guessing that Tahani’s drawing is of Mariah Carey’s lower back butterfly tattoo: “I wrote my college thesis on that back tattoo.”

* Glenn: “If it’s not too much trouble, can I get a hot glass of pig urine? I’m not picky. Whatever urine you have is fine.”

* The gang stumbling upon Derek’s sex toy stash, including those magnet handcuffs… and something called a “sex diaper”? (Ew.)

* Michael explaining that one of his lies was “an inspirational” lie: “Like, ‘So great running into you. We should get coffee sometime.’ Or all of Instagram.”

* Eleanor, when Michael refuses to take his skin suit off: “I’ve seen a lot of weird hogs in my life, dude. Get over yourself.”

* Eleanor insisting that nachos are humanity’s greatest creation and, when Chidi suggests the Sistine Chapel, scoffing: “Paint on a ceiling. I mean, it’s fine, but can you eat it at the movies?”

* Michael, as he prepares to vaporize himself into blue goo: “Make sure that you get all of me into the container, or I might come back way shorter. And that would bum me out.”