Eleanor and Michael get the experiment back on track this week on The Good Place… by reacquainting themselves with good ol’ ball-of-anxiety Chidi.

Chidi is shockingly relaxed at first, happily blowing off his ethics study group for an impromptu picnic: “When the weather is this perfect, I think Kant would say, ‘Who’s up for some Frisbee golf?'” Michael realizes Chidi isn’t being tortured enough, and needs to “live in a world of low-grade dread” to be motivated — and Eleanor is an expert at torturing ex-boyfriends. So she recruits Jason to pose as silent monk “Jianyu” and join Chidi’s study group, only to confess to Chidi in private that he’s actually Jason and doesn’t belong in the Good Place. Voila! An instantly stressed-out Chidi. 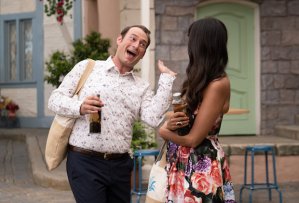 Tahani isn’t making much progress with John, though. She bonds with him during a spa day — at an exact replica of Victoria Beckham’s personal spa, aka “the Posh Wash” — but she can’t get him interested in joining Chidi’s study group. (Even when she describes it as “a colonic for the soul”!) She tries the direct route and confronts John about all the mean blog posts he wrote about people while he was alive, but he just flips it back on her and accuses her of having plenty of her own issues to work on. Which, true, but still rude.

Eleanor’s ploy is working, and Chidi is getting more and more agitated, burdened by keeping Jason’s secret. At a neighborhood luau mixer, when residents are invited to toss a lava rock into the bonfire and “receive whatever your soul most desires,” Chidi scrambles to stop Jason from doing it, knowing it would reveal his true Jacksonville dirtbag identity. (He’s right, too. Jason’s desire is his old motorcycle with Pamela Anderson airbrushed on it… and not her face.) Jason tosses his rock anyway, and Chidi is forced to claim that the “sexually explicit motorcycle” was actually his wish, riding off on it awkwardly. 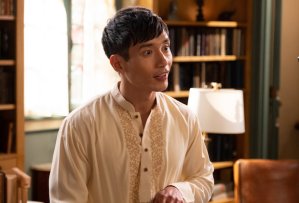 Jason’s stupidity could drive anyone crazy, and when Chidi runs into Eleanor’s office hyperventilating from all the pressure, Eleanor suddenly breaks down in tears at the sight of her old love in distress. (“I made God cry??” Chidi exclaims, before feeling an all-too-familiar stomachache.) Michael steps in and talks Chidi off the ledge, getting him to incorporate Jason into his study group, and Tahani mends fences with John after realizing they’re actually a lot alike: “jealous and miserable, with no real friends.” He still won’t take Chidi’s class, but Tahani will teach him ethics her own way, which starts with them watching the Britney Spears movie Crossroads together… without irony, this time.

Yep, everything’s looking up for the Soul Squad — but wait, who’s that ominous hooded figure inching its way towards the neighborhood? Looks like the Bad Place isn’t giving up that easily. (Fingers crossed for a return appearance from Trevor.)

* Michael, observing that Chidi is “chillaxing… which is a word I just invented, combining ‘Chidi’ and ‘relaxing.'”

* Janet mourning her breakup as humans do, by getting neon pink streaks in her hair and watching Mamma Mia: Here We Go Again: “It was OK. It’s just a lot of the same songs as the first one.”

* Janet, reminding Tahani that John loves celebrity gossip: “You should tell him about how eight different characters on Game of Thrones are based on you.”

* John: “So Natalie Portman does all of Scarlett Johansson’s stunts? Why?” Tahani: “For the power. Just to say she can.”

* Tahani, lamenting John’s lack of interest in improving himself: “I haven’t encountered this much resistance since I tried to get Timothée Chalamet to go out into the sun.”

* Tahani, chiding John for his nasty blogging: “You were so mean to Daniel Day-Lewis, he quit acting!” John: “I’m sorry, was he living in character as a man who thought he could pull off bootcut jeans?”

* Jason, remembering his beloved Pam Anderson motorcycle: “It exploded a week after I got it because someone wanted to see what would happen if they poured lighter fluid in the engine.” (Chidi: “Was that someone you?” Jason: “Yup!”)