Things are looking mighty grim for the Good Place gang this week — and that’s before Jason finds out that the Jacksonville Jaguars cut Blake Bortles.

Yes, that heartless NFL transaction does throw poor Jason into a pit of despair, along with Janet breaking up with him until the experiment is through. But the experiment itself is stuck in neutral, with Eleanor pushing Brent to realize he doesn’t actually belong in the Good Place, and Brent only responding with more oblivious alpha-male nonsense. She resorts to putting a glitch in the system, with a giant Princeton tiger mascot wreaking havoc and rain clouds pouring down Perrier, and Brent does start to recognize that he doesn’t actually belong here. He belongs somewhere better, he decides! He belongs in the Best Place, in fact!

Eleanor is out of ideas, and when her pals start to discuss if maybe they need a different leader, she lashes out at them before agreeing with them that they’re right: She quits. Michael won’t let her go that easy, though. He tells her she’s not allowed to quit, and when she protests that she’s just “a girl from Arizona” and she’s not built to handle this kind of pressure, Michael reminds her that she ruined his grand demonic scheme in just three months… and then beat him eight hundred more times. “This is a job for a human,” he tells her. “The only one who can save humanity is a girl from Arizona.” She just needs to keep trying and failing until she stumbles upon the right path. 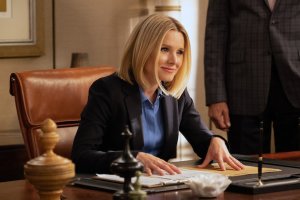 Newly invigorated and ready to continue her brand of “B-minus leadership,” Eleanor hatches a plan to deal with Brent: They tell him that he’s right, that there is a Best Place, but only the most “morally upstanding” people get to go there. So Brent starts doing good deeds left and right, hoping to score an upgrade — and yeah, his point total won’t go up yet because he’s doing it for selfish reasons, but Eleanor has faith he’ll evolve like she did and start doing good deeds for their own sake. She also figures out that Michael didn’t really have that nervous breakdown; he just faked it so Eleanor would take control of the experiment. But she still has another tough decision to make…

She sits down with Chidi and asks for his help with convincing Simone that she’s actually in the Good Place, and when he hesitates, she tells him that he and Simone are soulmates. (That news gives him a stomachache — a happy one!) So he and Simone share some yogurt, and he gets her to agree that she might as well treat people with respect just in case they’re real. Eleanor is happy that they seem to be making progress, and she’s not even sure she’s really lying about him and Simone being true soulmates. Hmmm… why do we get the sneaking suspicion that even if The Good Place does get a happy ending, it still might mean a broken heart for Eleanor?

* Eleanor, now that she’s tasked with monitoring Chidi: “Yeah, it’s super cool that I’m actively surveilling and manipulating an ex-boyfriend. I mean, more so than I usually did.”

* Jason, after Michael asks him if he knows why Michael initially made him a monk in the Good Place: “Does it have to do with the TV show Monk?”

* Michael, after Eleanor plots to bust Brent “open like a piñata”: “We tried that in the Bad Place. The goo that comes out doesn’t taste as good as candy.”

* The classic rock staple “25 or 6 to 4” by Chicago playing during the Brent-centric glitch. That’s totally one of Brent’s favorite songs ever, right? 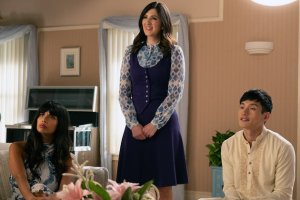 * Janet, pointing out that since Eleanor took over, the experiment’s chances of success dropped from 9 percent to 7.1 percent, “so purely from a mathematical standpoint, you are kind of pooching it.”

* Jason, after Eleanor suggests he should throw “a Jacksonville carnival”: “All I need is a bouncy house, some ninja stars and a bunch of ambulances.”

* Eleanor: “Everything I do blows up in my face. I’m like a hot, blonde Wile E. Coyote.” Michael: “That’s true. About you making lots of mistakes, not the thing where you sexualized a cartoon.”

* Jason telling Janet that he bought her chocolates, but then remembered she can’t eat them, so he decided to eat them himself and then describe to her what they tasted like: “The first one was gross…”

* Jason, recounting his usual post-breakup routine: “Drink a bunch of Mountain Dew, steal an ATV and ride it through a Panda Express.”