Thursday’s Grey’s Anatomy — the ABC drama’s 350th! — found Meredith fighting for her life… ’s work. And she wasn’t fighting alone, either. Colleagues and patients alike lined up to throw down on behalf of the doctor who’d committed insurance fraud in order to get little Gabby the surgery that she needed. Were their efforts sufficient to allow Mer to wriggle off the hot seat? Read on and find out! 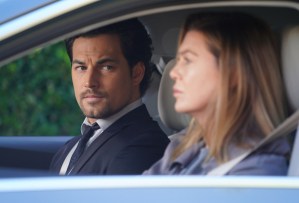 ‘THIS ONE’S GONNA BE A CIRCUS’ | As “My Shot” began, Richard apologized for not calling Jackson back to attend Sabi’s services (tellingly, Catherine hadn’t attended, either), Bailey groused that she didn’t recall her entire staff of attendings putting in requests for the day off, Jo instructed the interns to try not to kill anybody while the big kids were busy, and an anxious Mer arrived for her day in court a hotel with her crew (her sisters, DeLuca and Alex). Quicker than you could say, “Objection!” things went from bad to worse — she saw that on the panel was the doctor who had been responsible for Derek’s death! (And he didn’t even remember her!)

First on the witness stand was an embittered Bailey, who testified that she hadn’t grown close to Mer despite the fact that she’d named her son after Miranda. On cross, prosecuting attorney Ashley (wasn’t that Mrs. Maisel’s mother, Marin Hinkle? It was!) listed a litany of sins that Grey had committed, sparking a series of quick-cut flashbacks. Soon, DeLuca was being grilled about his relationship with Mer — “Is it consensual?” — and her treatment of him after Alex nearly beat him to death. Next, poor Levi was forced to admit that he’d taken his concerns that Gabby’s bracelet was mislabeled as Ellis to Bailey. 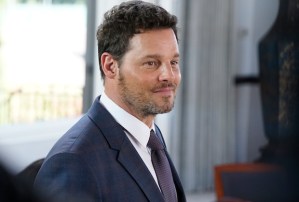 ‘IT’S A CRAP PILE OF CRAP’ | When Jo arrived, Alex filled her in on the s—-show thus far. During a 15-minute break, Mer told DeLuca that if she lost her license and he could still practice, they’d never make it. Once the hearing was back in session, Ashley quoted some damning comments from Owen about Mer, and prompted Richard to lie that he and he alone had gotten Adele a trial drug rather than the placebo that she was prescribed. Next thing we knew, a former staffer of Webber’s was admitting that Grey had never been supposed to work at Seattle Grace.

When Alex took his turn in the hot seat, and was questioned by Derek’s killer about Zola’s adoption, Mer went ballistic and announced that she remembered him “as the coward who stood over my dying husband… after you failed to get him a head CT! You don’t deserve to judge anyone!” As the court was thrown into chaos and recessed, the guy keeled over! Immediately, the zillion doctors in attendance leapt into action — with Mer ordering a damn head CT once he reached Grey Sloan! Meanwhile, Maggie appeared to be drinking away her sorrow over Sabi’s demise when Jackson entered the bar. “Did you come to gloat?” she asked. He hadn’t, so she admitted her fear that Richard would never speak to her again. 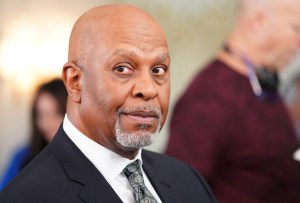 ‘YOU FLAT-OUT LIED!’ | Back at the hotel where the hearing was being held, Bailey called Richard on his lie and defended her decision to answer questions about Grey as if she didn’t know her at all. “Meredith Grey could commit murder, and you’d hide the body,” huffed Bailey. “You choose her, you always choose her.” If Miranda was jealous, she could lay off; he got enough of that from his wife. At Grey Sloan, Amelia beseeched Tom to perform a craniotomy on her brother’s killer, and he cancelled the rest of his day to do so. (That’s the Koracick we know and want to love.)

At the hotel, Richard admitted to Bailey that OK, he did sometimes give Mer special treatment. She was family — and brilliant. So it was worth putting his career in jeopardy for her. In turn, she argued that she had lost her job, her best surgeons and her best friends because he had supported Mer instead of coming to her. Inside, it was being announced that the hearing was being postponed when in came Alex with an army of Mer’s former patients, including Gabby and… Katie Bryce, is that you?!? (It was!) One by one, they testified to Mer’s amazingness.

‘SINCERELY, DR. CRISTINA YANG’ | At Grey Sloan, as Tom concluded his surgery, Amelia declined Link’s offer to get out of there. She needed to stay with the man who’d taken away her favorite person in the world. “But up here, far away from the scalpels,” he said. Her anger at Derek’s killer was understandably intense. Suddenly, the patient flatlined. At the hotel, Alex read a letter from Cristina and would’ve read testimony from Callie and Arizona, too, had he not been hushed up. Before the room adjourned, Bailey piped up — on Mer’s behalf. “She deserved to lose her job” for what she did, Miranda said, but “no one should be questioning her license.” Mer was the best… well, aside from Bailey herself.

As the hour neared its conclusion, everyone waited around while the medical board deliberated Mer’s fate. When Amelia returned to the hotel, she shared with Mer that Derek’s killer had died. Also, she hadn’t done it! Just then, Mer’s lawyer revealed that it was over — the verdict was, in essence, that Grey would get to keep her license. Off that, Bailey invited Mer back to Grey Sloan. And she didn’t just accept, she gave the chief “a big, fat yes.” At Mer’s, Jackson and Maggie pondered whether Richard and Catherine were having “problems.” After the text came in that Mer got to keep her license, Jackson came thisclose to kissing Maggie but managed to stop himself.

At the hospital, Blake delighted in telling the interns that Levi had been the one who’d ratted out Mer. After the doctor of the hour got home, DeLuca showed up asking to talk. The look in her eye when she spoke about Derek, he said, was different than the look in her eye when she spoke about him. She didn’t respect him the way she had her husband; maybe she never would. So “take some time, Meredith, and figure out what it is that you want… and let me know if I’m a part of that.” So, what did you think of “My Shot”? MerLuca’s near-breakup? Jaggie’s near-kiss? Hit the comments.