Can Triumph the Insult Comic Dog join the Masked Singer judges for the rest of the season?

Robert Smigel’s canine alter ego delivered better guesses — and more zingers — in Wednesday’s episode than Jenny McCarthy, Robin Thicke, Ken Jeong and Nicole Scherzinger have all season. Lest this recap turn into nothing but a Triumph stan page, I’ll limit myself to three of his really good moments:

* Regarding host Nick Cannon: “This is the biggest man in show business since Ryan Seacrest started saying no to things.”

* After Fox’s performance: “Dogs and foxes are natural enemies, much like Robin Thicke and any woman born before the year 2000.”

Wouldn’t it be more fun to have Triumph roasting everyone each week instead of, oh, a judge who thinks the name “Bjork” is a comedy goldmine? Anyway, let’s get to the performances. 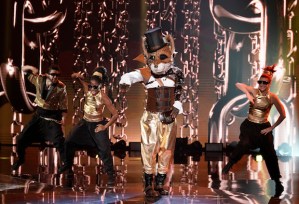 FOX | “I’m mostly known for being part of a pack of talented fellas, not my voice alone,” Fox told us during his clues package, which also featured a reference to his 30-year career and a set list that included “Everybody Say Yeah,” “Sugar Daddy,” “Cabaret” and “You and Me.” He performed Bobby Brown’s “Every Little Step,” showing off some sharp choreography, and ended the tune with a floor split so deep it made my hamstrings ache. (My guess: Whose Line Is It Anyway?‘s Wayne Brady.)

LADYBUG | The red-and-black chanteuse sang “Youngblood” by 5 Seconds of Summer, which was fine for the most part but got a little yell-y on the chorus. (Side note: This is not terribly important, but it dawned on me during the episode: Are Ladybug’s lips on upside down?) When it came time to share a physical clue with the audience, ‘Bug brought out a golf cart. “In my youth, I wasn’t afraid to get a little mud on my tires,” she said. (My guess: Former Fashion Police co-host Kelly Osbourne.)

FLOWER | If this week truly was the first time that Thicke thought Flower might be Patti LaBelle, I will eat Triumph’s cigar. How could anyone who purports to know contemporary music think that the vine vixen is anyone else, especially after those skyward notes at the end of Lonestar’s “Amazed”? (My guess: Patti “Let me see that cardigan!” LaBelle.) 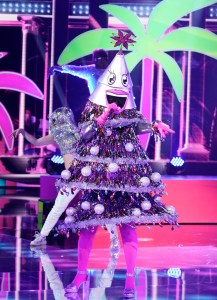 TREE | Pretty much every TVLine reader (and my colleague Andy Swift) told me I had sniffed too much resin last week after I guessed that Tree was American Idol alum Jordin Sparks. So I’m willing to admit that it might not be her beneath the tinsel and the bulbs. Tree’s energetic performance of Megan Trainor’s “No Excuses” was perfect, right down to the impressive vocal run at the end. Andy also told me that he thinks Tree is Saturday Night Live vet Ana Gasteyer, and her clue — “If it wasn’t for soup, I’m not sure I would be where I am at today.” — tracks: One of Gasteyer’s early TV gigs was in Seinfeld‘s “The Soup Nazi” episode. (My guess: Gasteyer.)

ROTTWEILER | File this in the same place you put my revelation about Ladybug’s lips: Is anyone else distracted by how the big dog has to hold his mic to his neck — where the singer’s actual face is — instead of his snout? And while I’m asking questions: Can Scherzinger really be that moved by a rendition of Ed Sheeran’s “Castle on a Hill” sung by a guy dressed as an allergic-to-shirts pooch? (To be fair, Rottweiler crushed it.) (My guess: American Idol alum Chris Daughtry.)

THE UNMASKING | The night’s castoff was Ladybug, who was revealed to be Osbourne.

Now it’s your turn! Did you guess the unmasked singer’s identity? Let us know in the comments!