What if Arrow‘s titular vigilante scolded scalawags by growling, “You have failed this f–king city!”?

What if The Flash‘s Cisco greeted the latest Wells doppelganger by groaning, “Great. Another f–king a–hole.”

We never hear such expletives uttered by the heroes (or villains) of broadcast-TV’s Arrowverse slate, which also includes Supergirl, Legends of Tomorrow and, eventually, Black Lightning. But what if we did?

I was catching up on Titans Season 2, and while Dick Grayson/Robin scoffing, “F–k Batman!” back in the pilot was jarring, most every F-bomb dropped since then simply feels right. Like, yes, Hank Hall would go on a salty tirade upon realizing Dick betrayed the team. And yes, Donna Troy would wonder what the eff just happened upon finding Titans Tower in disarray, after Gar apparently transformed into a beast. 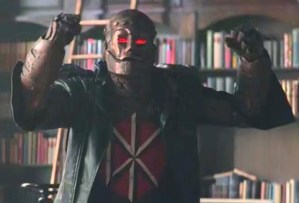 That was damn near-poetic. But that is dialogue on DC Universe, the streaming service that hosts Titans, Doom Patrol and the upcoming/similarly potty-mouthed Harley Quinn animated series. DCTV shows that air on The CW (or Fox’s ended Gotham), however, have to play by different rules.

But what if Arrow, The Flash, Supergirl, Legends and Black Lightning lived on DC Universe (as they possibly do on Earth-Three)? Which characters do you think would trigger that TV-MA rating by cussing? Who would do so often? And which character, even in such a scenario, would keep their language lily-white?

Ponder this very important question for just a moment! Imagine Oliver, Diggle, Alex, Mick, Anissa et al in the heat of a crisis (or Crisis), or frustrated by a setback. Who in that scenario drops an un-bleeped F-bomb or S-word, and who holds back?