If the reason that Rebecca is in that bed in the flashforward begins in this week’s This Is Us, oof, are we in for a rough go.

Because Tuesday’s episode very strongly hints that the Pearson matriarch is starting down the long, painful road to dementia… which would explain why she seems not to know who Randall is when we see her in the far-flung sequence teased last season.

In far less terrible news, Nicky finally has his court date for tossing the chair through the veterans’ center’s window, and it goes well! But the event feels like the end of an era, seeing as how Kevin is planning to leave town right before Thanksgiving. There’s no way Cassidy’s involvement in the Pearson saga is going to end just like that, right? RIGHT?

Read on for the highlights of “Sorry.”

‘R&R TIME’ | College-era Randall is fixing the dishwasher at Rebecca’s house when Marc swings by to pick up Kate. Given how little time he spends in the family’s presence before he and Kate head to the movies, it’s rather impressive how many red flags he manages to throw down. He calls Randall “Randy.” He not-kindly mocks Kate’s desire to see Practical Magic, which alone makes him a monster. And good lord, that facial hair! After they’re gone, Rebecca and Randall exchange looks. But then Rebecca, who we’ll later learn is kinda overwhelmed by life at this point, says, “I’m just happy that she’s happy.” Randall, changing tack and picking up on his mom’s weariness, offers to help her find the job she so sorely needs.

So he drives Rebecca to an interview, where the hiring manager thinks she’s lovely but is dismayed at her inexperience with the computer system his office uses. So when Rebecca is in the ladies’ room afterward, Randall gives the man the ol’ Pearson Elevator Speech. You know, the one that starts with Randall getting adopted at the hospital and ends with an earnest plea to help whichever member of the family is having the worst day at that moment?

It works. Rebecca later gets a call that she’s nabbed the job, which prompts her to ask her son what he said when he intervened with her new boss. “I just want people to see you the way I do,” he says. She’s touched… and then worried about starting an entry-level job at her age. She cries, but then pulls herself together quickly. “I don’t need you to worry about me, I promise,” she vows. But he reassures her that he likes being at home for “R&R” time (aka Randall and Rebecca time), which is almost too cheesy even for her. 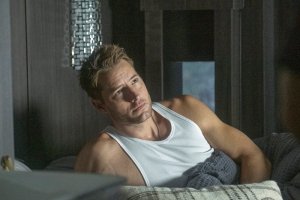 NICKY KNOWS | In the present, Kevin lies in bed and flashes back to when Cassidy left his RV after they slept together. “We’re both adults,” she told him. “Nobody did anything wrong.” Still, he feels guilty for complicating her life. She absolves him of that guilt but also says she probably won’t call him.

A week later, Nicky knows what’s up. “You slept with her, didn’t you?” he blurts, noting that their female friend hasn’t been at Alcoholics Anonymous all week. “I thought you were trying to help the poor kid fix her marriage, not destroy it. You’re like a human wrecking ball.” To make things worse, Kevin imagines that his father — and not his uncle — is yelling at him as he says, “Shame on you.”

Kev takes the sentiment to heart, spiraling until he winds up sipping club soda at a bar and spoiling for a fight with the closest lunkhead he can rile up. “Buddy, you looking for trouble?” a townie asks Kevin after he inserts himself into the guy’s conversation. The bravado goes back and forth until Kevin says of the man’s wife, “I bet you 20 bucks I can get her to take her clothes off within 20 minutes of meeting her.” That earns him a punch or two. 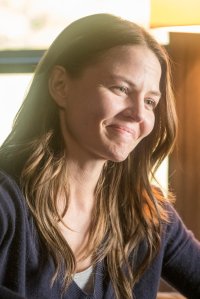 Nicky rallies Cassidy, who’s in the dumps about signing her divorce papers, and the pair go looking for The Manny. They find him walking, all busted up but sober, and Nicky is irked to realize that his nephew completely forgot that his court date was that afternoon. While Nicky fumes and changes into a jacket and tie, Cassidy gently applies foundation to cover Kev’s bruises and reassures him: “It wasn’t you who destroyed my marriage, Kevin. I did it all by myself, way before I met you.”

NICKY IS A NEW MAN | At his hearing, the judge asks Nicky whether he has remorse about throwing the chair. “Not really,” he replies, which seems we’re about to kick off another round of hard-to-watch self-sabotage. But instead, he launches into a monologue about how tossing the furniture “was the best thing that ever happened to me” because it led to his newfound sobriety, his ability to stick with therapy and his getting to know his nephew. “I wasn’t broken. I was sick,” he says in court. “And when you’re sick, you’ve gotta let the people who care about you help.” The judge is convinced that he’s turned a corner; she says if he remains in treatment and stays out of trouble, his record will be expunged.

Later, Kevin and Cassidy talk about how he’s going to Philadelphia for Thanksgiving, then back to California. “I hope you find your happy ending, Kevin,” she says sadly before she sets out for dinner with her almost-ex-husband and son. “I hope you find yours, too,” Kevin replies in similar fashion.

Back at the campers, Kevin invites Nicky to Thanksgiving. “I could do that,” Nicky says, seeming so much lighter than we’ve seen him. “You’re a good kid,” he adds, and Kevin imagines it’s his dad saying it. 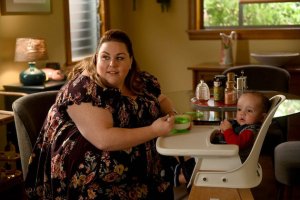 BABY JACK’S FIRST SOLID FOOD | In California, Kate and Toby can’t find a solid food that Baby Jack likes. While Toby is at the gym, Kate — with the help of neighbor Gregory — discover that the little guy enjoys avocado. But then Kate feels bad that the infant has had another first while his dad wasn’t there to witness it. So she engineers the situation to happen again when Tobes is home, though she can’t seem to fake the enthusiasm necessary to sell it. I’m surprised Toby doesn’t pick up on how weirdly his wife is acting, but we’ve got an even bigger problem brewing on the other coast, so… moving on! 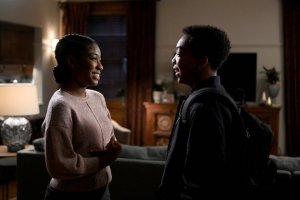 ‘SENIOR MOMENTS’ OR MORE? | Malik comes over for a movie date with Deja, supervised by Beth. But it goes badly when the teens start to argue and Deja stomps off to hide in her room. Beth pries until Malik sings like a bird: Deja wants to see her birth mom, Shauna, but feels weird about asking Randall and Beth. Beth immediately discusses the matter with Deja, admitting that a previous request to see Shauna had gotten lost along the wayside, and vowing that they would rectify the situation ASAP. Happy, Deja wonders if she can invite her mom for Thanksgiving. Beth says yes, but her smile is tight.

Meanwhile, Rebecca arrives early for the holiday, which gives Randall a chance to show her around town. But she seems more scattered than normal, and she insists on taking photos of everything “so I can show Miguel.” She calls Randall a “congressman” instead of a “councilman.” She loses her phone. Randall’s worry grows as the day progresses, until he brings her back to the house to rendezvous with Beth, the kids and Miguel, who’s just arrived after seeing his own family.

Randall waits until Rebecca is alone upstairs before talking to her about what he witnessed. “You don’t seem like yourself today. You had a few mix-ups,” he says, and her demeanor gets increasingly defensives as she attributes the confusion to nothing more than “senior moments.” He suggests that she see a doctor while she’s in town, and he offers to help her get an appointment with someone great, but she shuts him down, HARD. “I’m still the parent here and you’re still the son, in case you’ve forgotten,” she snips, and he comes very close to saying that he’s been taking care of her for most of his life, but he doesn’t… yet she knows exactly what he was thinking.

“You said something very clearly, and it was cruel. And it was beneath you,” she says, shutting the bedroom door in his face as she says she wants to lay down. Guys, I am very, very worried.