Donna Chambers has managed to survive the first eight episodes of American Horror Story: 1984, but she isn’t out of the woods yet. Wednesday’s hour (FX, 10/9c) brings the season to its chilling conclusion, and as actress Angelica Ross tells TVLine, it’s going to be a fight to the finish.

“Her intention has always been to stop the violence,” Ross says of her character, who initially disguised herself as Camp Redwood’s head nurse. “If it wasn’t for Donna, we never would have known that Margaret was really the killer. Some people had to die in the process, but Donna helped bring that to the surface. Now she just needs to see it through to the end. I don’t know what the end will mean for Donna, but I wouldn’t expect her to go out without a fight.”

We already compiled a list of questions we need the finale to answer — from the identity of the lake creature to the secret behind Camp Redwood’s “blood curse” — but we also grilled Horror Story newcomer Ross about her initial experience playing in Ryan Murphy’s sandbox of nightmares. Let’s see what she says: 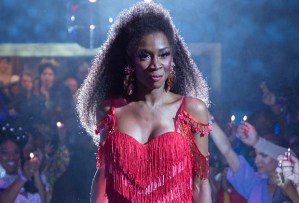 TVLINE | From your poignant Pose sendoff to joining American Horror Story, this has been a huge year for you. Have you been able to sit back and soak it all in?
[Laughs] I don’t know. I’m just getting used to being able to respond in the moment to whatever’s going on. A lot of what’s at the base of how I respond and show up to things is my spiritual practice. As a Buddhist, we look at the middle way. Even when I was filming Pose, it was a great experience, but while I was filming this show, the numbers were climbing of trans women that were being murdered. And here I was playing out Candy’s demise on set. So it’s a lot to deal with. What I’ve learned is that you have to take care of yourself in such a way that you can show up as much as you possibly can for every single thing. So I’m trying not to get caught up in the wins or the losses, but just trying to do my best in the moment.

TVLINE | We’d all be better off with that mindset.
It’s what I’ve had to develop. There’s such a responsibility in this moment, both behind and in front of the camera, for visibility and representation. I’m just excited and looking for every opportunity. Sometimes it’s leading with a trans narrative, and sometimes — like on American Horror Story — it’s not. It’s showing that I can play a character who’s just part of the fabric of our society.

TVLINE | It’s rare to see a transgender performer get to play a character whose storyline doesn’t entirely revolve around their trans identity. What has that opportunity meant to you?
It’s meant the world. It’s been such a wild affirmation. I’m a theater kid who grew up doing plays and musical theater, and when I transitioned, I thought I was going to have to give up my dreams. Especially with the way society and the entertainment industry dealt with trans people, not only in how they told our stories, but also in locking us out of the process of telling those stories. It has meant the world to me to have someone like Ryan Murphy — who’s not only so talented, but also recognizes talent — to see me. I feel that him seeing me has helped me become the actor I know that I am. The audience has also been responding to the acting. I think I’ve seen one comment about me being trans. Someone said something off-putting on one of my Instagram posts, and one of the American Horror Story fan accounts basically said, “That won’t be happening here. We’ve got your back.” That gave me a lot of hope that we’re changing the culture in ways people aren’t expecting. 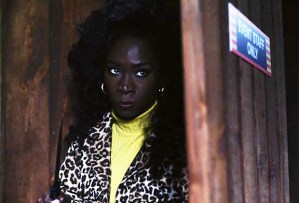 TVLINE | When you were cast and found out that this season was going to be a slasher, what were your first thoughts?
One of my first thoughts was definitely, “Well, there’s me and there’s DeRon [Horton].” So when DeRon went first, I was like, “I made it! I’m still here.” The fact that I made it this long is fun and historic. It’s like when people watch American Idol; they want to see themselves and root for someone that gives them the feeling that they could make it, too. Since Donna has made it this far, maybe the viewers at home are like, “I would have made it too, girl!” To bring that energy to this has been so fun.

TVLINE | Did you have any idea what to expect before you started?
I was told to expect a lot of hard work, and I was not disappointed. There are already so many moving parts, so when you add special effects and blood rigs and scars, it’s a lot of work. I’m so grateful for this process. This show has definitely pushed me to the point where I was like, “I’m breaking down.” It has really stretched me as an actor. I can scream, I can run, I can do muddy fight scenes — all these things I never thought I could do.

TVLINE | And now she’s back at Camp Redwood.
Donna did not want Brooke to go back alone. You could see her kicking herself. Like, she made it out. Why would she go back? Donna’s intentions were clear from the beginning. She understands that you have to break a few eggs to make an omelette.

TVLINE | Can Brooke really trust Donna, though? She hasn’t always been the most honest person.
[Laughs] Oh, who hasn’t lied? Let me tell you something a pastor once told me a long time ago: When I got my driver’s license, I had it say “female” before I had any documentation. It was my truth. It’s how I see myself, and it’s how I believe my creator sees me. Just because other people don’t see it that way, that’s their problem. So Donna has had to manipulate and move around people’s lack of understanding of what her intentions and final thesis and objectives are. I can’t say that I can justify everything she’s done.

TVLINE | Let’s end on a random question. You spent a few years living in Roanoke, Va. Have you seen the Roanoke season of Horror Story?
I have not seen that season, and let me tell you why. Coven is my favorite, I’ve also seen Murder House, Apocalypse and Freak Show. But this whole process has been baby steps for me. I’m a scaredy cat who can’t do horror, so it took me a while just to get past the font and the music in the first two seconds when you hit play. I heard that and I stopped it. I tried again the next week, and I got to where the trees and the house come in. It was that slow for me. I know I definitely have to see it, though, especially since I lived there.

What are your predictions for the AHS: 1984 finale? How will it all end, and who will be left standing? Drop a comment with all of your thoughts below.