Death is unfortunately a fact of life for Pose‘s ball community — and they had to say goodbye to one of their own in this week’s devastating episode. 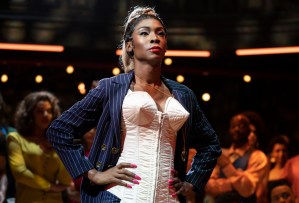 At the latest ball, as Pray Tell celebrates the chart-topping success of Madonna’s “Vogue” — “We done changed the culture, y’all!” — he’s interrupted by the arrival of Candy, who marches in wearing a Material Girl wig and cone bra. “This bitch again,” Pray Tell groans, before hammering Candy with harsh insults as usual. She sticks up for herself, but the judges side with Pray Tell, hitting her with pitifully low scores — including one zero. She storms off, only to confront Pray Tell later at a summit of local ball emcees, demanding they include a lip-sync category. When Pray Tell shuts her down, she holds a knife to his throat (!) and throws a few things at him before storming off again. So yeah, things aren’t great between them.

But during the next ball, Blanca finds Lulu crying backstage: Candy’s gone missing. She’s been turning tricks lately to make money, so Blanca and Lulu head to her usual motel to look for her, only to get turned away by the manager. Later, though, Blanca gets a phone call and breaks the bad news to Lulu: Candy is dead. (A motel maid found her battered body in a closet.) Nurse Judy helps them talk a hospital administrator into releasing the body to them — Candy’s parents won’t even show up for the funeral — and when they see the dreadful wig and makeup the funeral director gave poor Candy, they pitch in to give her one last glamorous makeover. 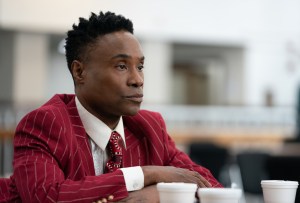 A shaken Pray Tell addresses the mourners at the funeral, admitting that Candy was a “pain in my goddamn black ass… but she was still my sister.” (He’s also refusing to take AZT to battle his dropping white blood cell numbers, preferring “a more holistic approach” of half-baked home remedies.) He wishes Candy were still here, so he could give her “the grandest, shiniest mother–kin’ trophy for her contribution to our community,” and pledges to fight on her behalf against intolerant people like the man who brutally attacked her. After he finishes, he hears a voice saying: “I forgive you.” It’s Candy, who appears in a vision to share some laughs and tears with Pray Tell, who confesses that he picked on her because she represented “all the things I try to hide about myself when I go out into the world.” So they do make peace… even if it’s beyond the grave.

Candy’s ghost appears to others at the funeral, too, encouraging Angel to pursue a mainstream modeling career and reminiscing with Lulu about all the good times they had together. (This, though, is only after a grieving Lulu calls Candy “a thieving bitch” and steals gloves and a brooch off her dead body.) She even finds common ground with her parents, who do eventually show up for the funeral, and though they still bristle at the name “Candy” — her mother still calls Candy her “son” — they reach a new understanding that’s quite lovely. Pray Tell declares that from now on, every ball will have a lip-sync category known as “Candy’s Sweet Refrain,” and Candy gets a final hurrah in a joyous fantasy sequence that sees her lip-syncing to “Never Knew Love Like This Before” at the ball, getting showered with smiles and praise — and straight 10s and a trophy!

The whole ordeal reminds Pray Tell that life is precious — “I don’t want to go to my casket with any regrets” — and so he takes his first AZT pill along with Blanca. They make it a toast: “To life.” And, as a final title card sadly reminds us, the fight for life is far from over: It says that more than 1,000 transgender and gender-nonconforming people have been murdered across the globe since 2016.

Got thoughts on tonight’s powerful Pose? Drop ’em in the comments below.