Netflix has the perfect holiday gift for fans of YOU — and they don’t even need to wrap it.

The Penn Badgley thriller, which has relocated from Lifetime to the streaming service, will be back for Season 2 on Thursday, Dec. 26.

YOU‘s first season followed Badgley’s Joe Goldberg, a bookstore employee who instantly fell for, then obsessively stalked, a customer-turned-love interest named Beck. But in the season finale (spoiler alert!), Beck died at Joe’s hand, and his ex-girlfriend Candace showed up in a cliffhanger ending.

The upcoming sophomore run will move the action to Los Angeles, and Haunting of Hill House breakout Victoria Pedretti will star as aspiring chef Love Quinn, the new object of Joe’s obsession.

“Los Angeles is a completely different vibe,” executive producer Sera Gamble previously told TVLine. “We started the writers’ room for Season 2 by being like, ‘Joe moves to L.A. and he completely hates it. Let’s talk about how much fun that is.'”

Check out a new poster for YOU‘s second season below, then drop a comment with your hopes for the new episodes. 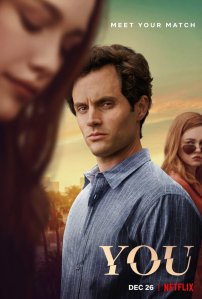