Imagine you’re a couple who’d yearned for a baby for years, but thought that dream was unattainable. Then, one evening while you’re relaxing at home, an impossibly rich woman shows up at your door and offers you a child that’s biologically yours — plus $5 million, just to sweeten the deal — in exchange for your home and the land on which it stands.

Actually, scratch that. You don’t have to imagine it: That exact scenario plays out at the start of this week’s Watchmen. And it is testament to this show that the exchange isn’t even even the most messed-up thing involving babies we’ll see during the hour.

Read on for the highlights of “If You Don’t Like My Story, Write Your Own.”

EGGING ‘EM ON | Mr. and Mrs. Clark, owners of Clark Acres Farms in Oklahoma, are in bed when there’s a knock at their door. It’s Lady Trieu, or “the billionaire building the big clock down the road,” as the couple identifies her. Lady Trieu is nothing if not accurate, so she corrects them: She’s a trillionaire. (What she doesn’t say, but we already know: She bought Adrian Veidt’s company right around the time he went missing.) And she wants to buy their house and the 40 acres it’s on, even though the Clarks say it’s not for sale.

Trieu explains that she made her money in pharmaceuticals and biotech, and she knows that Mrs. Clark visited a fertility clinic 10 years before but was told her eggs weren’t viable. What if, she asks, she could deliver them the child they’ve wanted for so long? While the Clarks look at her as if she’s crazy, Trieu beckons, and the girl we saw at the newsstand in the previous episode walks in, cradling an infant.

The kid is their biological son, Trieu asserts, and she’ll throw in an extra $5 million if they agree to her deal on the spot. (Side note: Trieu’s joke about the child being destroyed if they say no had me laughing out loud, so save a seat for me in The Bad Place.) The Clarks eagerly sign it all away, then the lights begin to blink and the house shakes. Outside, something from the skies crashes to earth. “What is that?” the new dad asks, bewildered. “That is mine,” Lady Trieu answers.

ANGELA FINDS MORE FAMILY | At the bakery, Angela cleans up and dismantles Will’s wheelchair. And when the Greenwood Cultural Center’s automated service calls with news of another ancestor, she’s so distracted, she accidentally burns the “Watch this boy” flier Will carried with him since childhood. Oops.

She wastes no time breaking into the GCC and asking the Skip Gates kiosk about her family free. We’re treated to a very cool visual as a virtual tree sprouts up in front of her, but what it reveals is sad: The whole family essentially died in the 1921 massacre. There’s a hologram of Will as a child there, but it doesn’t inspire much empathy in Sister Night. “Whoever you are,” she says, “leave me the f—k alone.”

Just then, there’s a crash outside. Angela rushes outside to see her car, which has been unceremoniously dropped back where it was picked up. And Laurie Blake, who has just exited the Mars communication booth after ending her transmission from the last episode, can’t stop laughing at what’s unfolded before her. 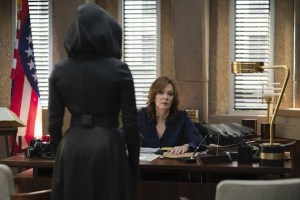 WHAT LAURIE DOES (AND DOESN’T) KNOW | Will’s pills are still in the glovebox, so Angela surreptitiously retrieves them and brings them to Wade’s fallout shelter-style home, which is decorated with an alarming number of squidfall photos. He’s got an ex who can help them identify the pills, and he’s also going to hold onto Judd’s robe for now so that Blake won’t find it. “Looks like we have ourselves a reckoning,” Wade observes, adding that the robe could have belonged to Judd’s grandfather.

Next stop on Angela’s Get Rid Of Evidence Tour: tossing Will’s dismantled wheelchair from an overpass, where it lands on a moving freight train. Too late, she realizes that someone wearing a silver unitard is watching her. When the probably-vigilante knows he’s been seen, he runs, squirts himself with something and then slides into a drainage ditch in a manner that bodies usually cannot do. Cool! Also: Uh-oh, Angela.

Back at the police station, Blake is the de facto new boss. The prints on Angela’s car have been traced to William Reeves, a New York City police officer in the 1940s and ’50s. But he retired young and then fell off the grid. Laurie suspects that the stolen (and then returned) car has some connection to Judd’s death. And while she, Angela and Dale Petey drive to run down a lede, the FBI agent posits that those who wear masks do so to convert a trauma in their life and hide the pain. “What was your trauma?” Angela asks her mockingly, so Laurie instructs Petey — who, you’ll recall, is a superhero superfan — to give Sister Night the short version.

That’s how the part of the Watchmen audience that hasn’t read the comics finds out that Laurie’s parents were two masked heroes known as The Comedian and (the first) Silk Spectre. The comedian sexually assaulted Laurie’s mom in the ’40s; Laurie didn’t find out about her origins until much later.

Before more backstory can be unspooled, the trio arrive at Lady Trieu’s clocktower. They’re there because Trieu’s operation has drones capable of picking up and carrying off automobiles. Eventually, Laurie and Angela wind up with the lady in question herself, who is constructing the virtually indestructible “first wonder of the new world.” She explains that she is from Vietnam and happily hands over a list of her employees who would know how to operate the drones they were discussing earlier. Then, she says in Vietnamese to Angela, “Your grandfather wants to know if you got the pills.” Angela’s face lets on nothing as she replies, “Tell that old f—ker he can ask me himself.” (Ha!)

At home, Angela is dismayed to learn that Laurie interviewed Cal. “Did you tell her about your accident?” she asks. “Didn’t come up,” he replies. “Good,” Angela says, looking a little relieved. So there’s another mystery to keep tabs on… 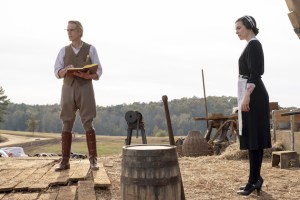 SHOOT FOR THE STARS | Let’s check in on The Possibly Delusional Yet Nattily Dressed Artist Formerly Known as Ozymandias. He rows out onto a lake and pulls up something vaguely resembling a lobster trap, only it’s full of… babies? Yes, babies. He throws a few back into the water, then takes two and brings them back to a contraption in his house. He gets the machine going, then listens to music and eats cake while the creatures spinning in his machine scream. The device apparently accelerates growth, because when it’s done, he leads a newly adult Phillips and Crookshanks to the manor house.

He explains that he’s not their maker but he is their master — please note: the two of them are so stymied by literally everything that’s happened, there’s no real indication they understand anything Veidt is saying — and they dumbly watch him as he brings them to the dining room. “I apologize for the mess. I had a rough night,” he says feebly as they all take in the scene: It seems like he’s massacred every single one of the previous Phillips and Crookshanks clones, who are lying where they fell. It’s funny (I promise!) but not as funny as when he and the newest batch of clones load the dead bodies into a huge catapault and heave them into the heavens. Throughout, Veidt laments that his paradise has become his prison in the four years he’s lived there. 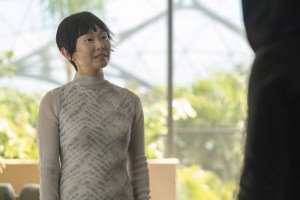 MORE MYSTERIES | That night, at Lady Trieu’s place, her daughter, Bian, wakes up after a nightmare. She takes what looks like an IV out of her arm, then goes to Trieu. Upset, she says that she dreamed men burned her village and “they made us walk” — the whole thing was so lifelike, she reports, that her feet hurt. She wants comfort, but Trieu won’t walk her back to bed, and the girl eventually exits on her own.

Will Reeves is there, and it seems like they were discussing Angela before they were interrupted. Trieu says, “If you want her to know who you are, just tell her,” but Will says she’s doing the same thing to her own child. (It appears that Will can stand and walk, by the way.) Trieu alludes to a deal. “How much longer?” he asks. “Three days,” she replies. Then Will says that he’s betrayed Angela, and she’ll know in three days — and she’ll hate him. Still, “I am in, all the way. Tick-tock, tick-tock.” Make of that what you will!