Throughout production on Starz’s Dublin Murders, one of its stars says, you could never quite tell when winter might be coming.

The crime thriller, which premieres Sunday (8/7c), shot many of its outdoor scenes in the woods of Belfast, where Game of Thrones filmed. And even though the HBO fantasy series wrapped a while back, “They had walking tours,” Killian Scott tells TVLine, laughing. “And it’s like, ‘Where are the bodies?!,’ and then, ‘Cut, we’ve got Hodor in the background.’ And you look over, and there’s a dude in the full Hodor costume.”

Read on for the essentials about the upcoming series, with an assist from Scott and co-star Sarah Greene. 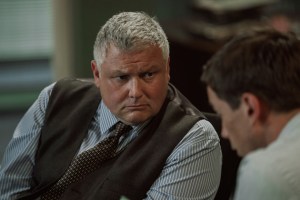 BY THE BOOK | Season 1 of the show is based on two titles from Tana French’s Dublin Murder Squad novel series: In the Woods and The Likeness.”Obviously, there’s been some changes,” Greene says, but maintains that she and Scott were very aware of the “huge responsibility taking on books that have been around for a while and that people love and adore… They love these characters.”

THE GENRE | Though Dublin Murders may seem to have a lot in common with crime series like Broadchurch (and its American counterpart Gracepoint) and The Missing, Scott says his show has an inherently different feel. “Broadchurch was very naturalistically shot, in many respects, whereas Dublin Murders has a slightly heightened element cinematically, because there is a supernatural, ominous quality — particularly in the woods,” Scott says. “[Executive producer/writer] Sara Phelps described it to me as it’s two characters are walking into Hell, and you’re kind of just going with them and hoping you will come out the other side of it.” 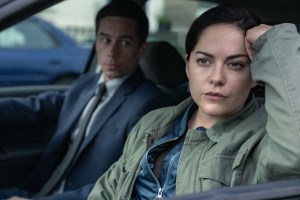 THE PARTNERSHIP | Greene and Scott’s onscreen partnership is incredibly believable — Rob and Cassie are besties as well as co-workers — which is all the more impressive given that they didn’t really meet until the show’s table read. “We were really lucky. We clicked immediately,” Greene says. “One of the things that made it so harmonious and so easy was that neither of us wanted to overanalyze the thing,” Scott adds, citing their shared love of letting scenes play out as naturally as possible

THE MYSTERY |  At the start of the season, “Rob is a guy who’s very much struggling to keep things together and has these demons that become all-consuming,” Scott says. When a girl’s dead body is found in the exact spot in the woods where three kids went missing 20 years before — and one was found, yet had no recollection of what had happened — the series becomes “as much a psychological character study of two people under extraordinary pressure as it is about these cases,” he adds.