All together now, Grey’s Anatomy fans: Damn it, Owen! You have it all now, buddy. A woman that you love, not one but two kids, a job far, far away from Tom. You didn’t have to react as badly as you did to Amelia’s revelation that she and Link are having a baby. It just wasn’t a good look for you, buddy. Read on, and not only will we shake our heads at the exes’ latest dustup, we’ll review the development that kept Richard and Catherine at odds, and cover Maggie’s tragic introduction to some relatives that she didn’t realize she had. 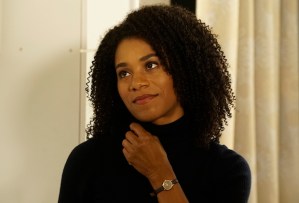 ‘WE COULD BE TWINS!’ | As “Papa Don’t Preach” began, Amelia grabbed an elephant of Ellis’ — the literal elephant in the room? — as an excuse to visit Owen at Pac-North and disclose that she is with child. Or did she really have to? she asked Mer, who didn’t have time to dither. Wouldn’t Owen figure it out when her baby bump ballooned? At Grey Sloan, Maggie quickly deduced that Catherine wasn’t aware that she and Jackson had broken up. Maggie later filled in Jackson, adding that she hadn’t mentioned their relationship status to Richard, either — they were both in the dark?!? Soon, Maggie was distracted by the arrival of Sabi (Kelly McCreary’s sister, Crystal) and her dad, Chris — Webber’s niece and brother. Speaking of Richard, at Pac-North, he brushed off Gemma despite her apology for what had transpired between them. En route to her dad’s new workplace, Maggie got to know her relatives, with grumpy Chris making a point of saying that Richard was ashamed of them. (Apparently, the brothers had been estranged for five years, and Chris had been pretty nasty when he’d learned about the existence of Richard’s illegitimate daughter.)

At Pac-North, Amelia had no sooner totally Amelia’d her baby news by blurting it out to Owen than in came Cassidy, a woman whose son Henry had called 911 when she’d taken a fall down the stairs. Moments later, Sabi and Chris arrived with Maggie, and it quickly became apparent that they weren’t just there for a family reunion: Sabi had an insanely large tumor. She even had a three-week-old scan of it! “This kind of tumor is operable,” Maggie explained. But they’d need new imaging, stat. Sabi was just as interested in getting the scoop on Maggie’s personal life as she was in getting better; she even hated Jackson on principle. In no time, the cousins decided that they could be twins — they loved a lot of the same things, from classical music to crossword puzzles. Though Richard was apologetic about the fact that he hadn’t mentioned this branch of the family tree to his daughter, she was more fascinated than ticked. Unfortunately, Sabi’s scan revealed that her tumor had grown. A lot. 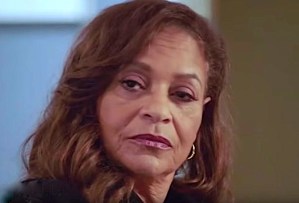 ‘WE’VE KNOWN EACH OTHER FOR TWO HOURS’ | Despite the fact that Sabi and Maggie are related and Maggie wasn’t a doctor at Pac-North, she was determined to be her cousin’s surgeon. When Chris balked at that notion, big time, Richard offered to bring in an on-call doctor. Maggie understood — kinda. If something went wrong in the O.R., she’d “always be the love child that killed your favorite niece.” When Mer stopped by to visit Alex, Maggie filled in her sister. Soon, they were joined by Amelia, who expressed surprise that Owen was being so weird about her pregnancy. (Had she met him? “Weird” is kinda Owen’s go-to.) Seconds later, Maggie was paged: Sabi was crashing. And at that point, Richard wanted his daughter to operate — fast. “Don’t put your daughter’s life in someone else’s hands,” he beseeched Chris, who grudgingly agreed to let Pierce do her genius thing. In the O.R., Alex told his crew to be on their best behavior and joked that maybe he could get Maggie to come work there one day. Outside, Chris grumbled to his brother that “the last time you tried to calm my nerves in a waiting room, Mom died.” Replied Richard: “I was 10 years old.” After Chris left to get some air, Gemma approached her crush and offered him some sympathy — and that isn’t a euphemism, she wasn’t making another pass, she was being understanding. But it didn’t look that way to Catherine when she walked in. She wouldn’t even shake Gemma’s hand.

When Chris returned, Catherine’s chilliness dissipated — at least toward him. Reminiscing, Richard and Chris even started to get along… till the latter threw in Adele’s name. Quickly, the tension rose again to the point that it was too thick to be cut with a scalpel. Left alone with his wife, Richard attempted to explain about Gemma, which only made things worse. He was talking a lot, Catherine noted, for someone who said there was nothing to talk about! Outside the hospital, Gemma approached Catherine… who offered her a foundation job with better pay. “We have openings all over the country, though none here in Seattle, I’m afraid,” said Catherine, transparent as cellophane. In the O.R., Sabi took a nosedive because the staff didn’t work the way that Maggie did (or vice-versa). Still, Pierce was able to take control of the situation. She couldn’t lose her cousin… could she? While Chris climbed the walls, Richard reached out to him — and actually managed to get to him, it seemed. Sadly, at that moment, Alex was telling Maggie that it was too late, Sabi was brain dead. S—.

‘MA’AM, DID YOU KNOW THAT YOU WERE PREGNANT?’ | While Owen was treating Cassidy, he reported to her that she was expecting. Her response: “It didn’t work.” Yikes. It appeared that she had thrown herself down the stairs to terminate her pregnancy. When Amelia offered to speak with Cassidy, suggesting that she might be more comfortable talking to a woman, he took her up on it. By and by, Cassidy revealed that she couldn’t afford another pregnancy. But she hadn’t tossed herself down the stairs for a do-it-yourself abortion; she’d doubled up on an herb to terminate the pregnancy, but it hadn’t worked and had made her so dizzy that she’d taken a spill. Even with all of that information in mind, Owen, to Amelia’s consternation, refused to adhere to Cassidy’s wishes and end her pregnancy. At this point, he began getting extra testy with his ex. Oh, Owen. After talking with her sisters, Amelia returned to Cassidy and helped her get the medication that she needed to safely terminate her pregnancy. When Owen hit the roof, thinking that maybe Cassidy would’ve changed her mind, it led him and Amelia directly into a fight about the fact that she hadn’t wanted to have a baby with him but now was having one with Link.

In the end, Owen concluded that it wasn’t that his former wife hadn’t wanted to have kids. “You just didn’t want to have them with me.” Instead of saying #braintumor, a—hole, and running, Amelia just ran. Moments later, he caught up with her and she apologized; she shouldn’t have ambushed him with her news. What’s more, she said that she hadn’t been ready before Leo and Betty to have kids. So in a way, she had him to thank for her present-day readiness. And like it or not, they were family now. Softening, Owen wondered how they were going to manage their fantastically big, messy family, and acknowledged that he had been awful to Cassidy. He owed her a Jell-O and then some. In the episode’s final moments, Maggie understandably melted down over Sabi’s death — she’d pushed her cousin and uncle to let her do the surgery! With Alex’s help, she pulled herself together enough to break it to Chris that his daughter had died on the table. “I did everything that I could,” she said, “but unfortunately, I couldn’t save her.” Chris did not take it well; he furiously reminded Richard and Maggie that he and Sabi hadn’t even wanted her to operate. Heartbreaking.

So, what did you think of “Papa Don’t Preach”? Owen’s reaction to Amelia’s happy news? Maggie and Richard’s crushing family matters? Hit the comments.