This week’s A Million Little Things marks Theo’s 10th birthday, but unfortunately, his mom and dad don’t give him the one gift he sorely needs and certainly deserves: an end to that ridiculous lie about Katherine’s Grand Canyon legal battle. Good god, kid, I know you’re heartbreakingly earnest and all, but catch a clue!

While we’re on the topic of lies: Delilah is really not down with Katherine’s new fervor for telling Sophie and Danny the complete truth about little Charlotte’s paternity. And when Eddie suddenly changes his position on the matter, things start to get so ugly, a car accident provides a welcome distraction.

And then PJ’s DNA test comes back. Turns out, he’s 100 percent that Dixon.

Read on for the highlights of “Ten Years.” 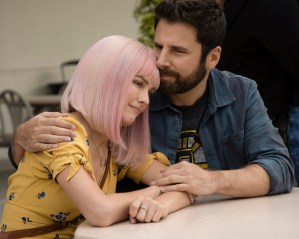 THE BEST POLICY? | Maggie and Sophie wind up taking the test to get their driver’s licenses on the same day. Mags has a panic attack and doesn’t actually get through the exam, but Sophie passes with flying colors. She’s rewarded with a car: Jon bought it the year she was born, Delilah tells her, and “he always wanted to give it to you the day you got your license.” An excited Sophie then takes Danny out for a spin.

Meanwhile, Charlotte is hanging out with Rome and Regina for the day. PJ just happens to be around when Delilah drops her kid off at her friends’ place, so she meet him — much to Rome’s freaked-out dismay. After Rome kicks the teen out, he gets a call that he needs to make some edits to his car commercial. Left with no other option, Regina straps Charlie into a carrier and brings her to Katherine’s house, where she’s scheduled to help the lawyer make a cake. Katherine is taken aback when her husband’s love child suddenly shows up on her doorstep, but she swallows her discomfort and then warmly welcomes Regina and Charlie.

Though Regina had previously sided with Delilah’s decision to lie to Sophie and Danny about the identity of Charlotte’s dad, her time at Katherine’s has her seeing the matter in another light. Katherine recalls how terrible it was on that day 10 years before when Eddie finally sobered up and showed up to the hospital, having completely missed his son’s birth. “Lies lead to drinking, and I don’t want to go back there,” she says, adding that also she doesn’t want Theo or Charlotte to grow up in a deceitful environment.

Meanwhile, Eddie and Delilah are also discussing the matter. “Maybe Katherine’s right,” he says, sparking some real anger from Jon’s widow. “You want me to tell my kids I slept with their father’s best friend and then had a child with him?” she asks incredulously. “I can’t do that.” 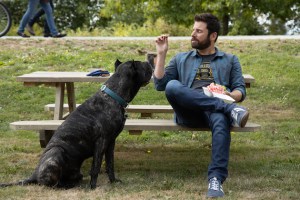 A HAPPY PUPPY ENDING | In another part of town, Gary decides to do a little recon on Enid, the elderly woman who was Colin’s — I’m sorry, Wesley’s — original owner. He pretends to be doing a survey, so Enid happily tells him about her dead husband and how one of the last things he did was put up the missing posters at the animal shelter. Gary’s guilt gets the best of him throughout the day, and by the time he and everyone else have gathered at Eddie and Katherine’s for Theo’s 10th birthday party, he knows what he’s got to do. He tells Maggie that he’s going to spend one more day with Colin, then return him to his rightful home. When she says she wants to be there to support him, he sadly tells her it’s something he’s got to do alone.

But Gary has a really hard time saying good-bye to his four-legged friend, even though he knows it’s the right thing to do. Maggie eventually finds them both back at the apartment, and when she tells Gary she’s going to return the pooch for him — because she went back and got her license, after all! — he lets her… then starts sobbing the minute she and Colin leave.

He eventually pulls himself together and rushes to Enid’s to be there for one final farewell. But after Maggie hands over Wesley’s leash to the overjoyed senior, his girlfriend’s got a surprise: The “Wesley” they delivered to Enid was actually Maurice, aka the Colin lookalike from the shelter, she tells him. And Colin is really waiting in the car! Gary is happy! Maggie is happy! Colin is happy! And they all drive off before Enid catches onto the fact that her pup has a blacked-out white spot on his ear, courtesy of Maggie’s permanent marker skills. 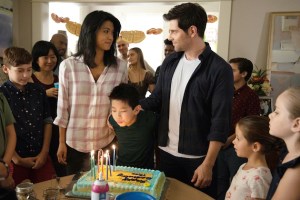 DELILAH WON’T BACK DOWN | Back to Theo’s bash. Eddie and Sophie perform a song for the birthday boy, which he loves, and then Sophie lights up big-time when her guest, PJ, arrives. Rome’s discomfort with the situation — they could be siblings! — increases about tenfold when the two teens go for a drive. When they’re in the car, Sophie goes to kiss PJ. He blocks the move, which embarrasses her, and in her flustered state she puts the car in drive instead of reverse and winds up ramming it into the sidewalk.

Soph’s panicked call to her mother comes right after the party, when Katherine, Delilah and Eddie are the only ones left. And once it’s ascertained that everyone is fine, D has zero patience for Eddie and Katherine’s newfound search for truth. “I know what’s best for my kids, and they can’t lose me right now, so we’re sticking to the plan,” she decrees. Katherine doesn’t back down. “I’m sorry you lost your husband, but I almost lost my husband, too, because of you,” she responds. Before I can roll my eyes too hard at that — I mean, Delilah didn’t knock herself up — Eddie owns his part in the mistake and says the only way he can be “the best version of myself” is to be honest about everything in his life. Still, Delilah is unmoved, and angrily tells Katherine she won’t let her hurt her children.

After she leaves, Katherine gives Eddie the cake she made, which was to celebrate his 10 years of sobriety. “I didn’t believe in you then, but I believe in you now,” she says. And she punctuates that sentiment by pulling him into their bedroom after they kiss goodnight.

JON, YOU ARE THE FATHER!| At the end of the day, Rome and Regina come home to find the DNA test results waiting at their door. They open it, and Rome reads the letter: “Jon is PJ’s father.”