Don’t throw in the Robin Thicke towel* just yet — we’ve got a double shot of The Masked Singer to get through before we can find out which two celebrities were unmasked on Wednesday.

The back-to-back episodes came courtesy of this year’s World Series Game 7, which preempted Fox’s surreal singing competition last week. But why dwell in the past? Let’s get on with recapping this week’s performances, which are broken up by episode!

* Why, exactly, does series judge Thicke have a monogrammed towel at the ready at all times? I’m genuinely curious. 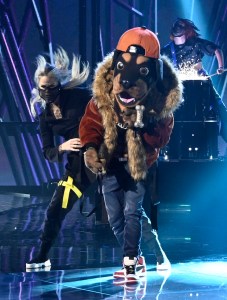 ROTTWEILER | Is it just me, or are the video packages serving up more misdirects than they did in Season 1? “I’m capable of succeeding on my own, and I want it that way,” the big dog told us, seemingly wanting us to think he’s a former member of Backstreet Boys or a similar boy band. But when he sang “Love Runs Out” by OneRepublic, all I can hear is a former American Idol star coming through clearly. (My guess: Chris Daughtry.)

LADYBUG | Given how the bug reacted to judge Ken Jeong’s suggestion that she might be Lindsay Lohan, I’m going to go out on a limb and say she’s not Lindsay Lohan. Or maybe she is? Remember, that crafty little redhead did pull off a parent trap back in the day. Her sassy performance of Lizzo’s “Juice” was fine, though not terribly vocally strong. (My guess: ubiquitous talk-show host Kelly Osbourne.)

TREE | Tree’s performance of Aretha Franklin’s “Think” leaves (get it?!) me with the strong impression that she’s a trained vocalist. But her clues — including the Mean Girls shout-out “I’m not a regular tree, I’m a cool tree” — make me pretty sure that she’s not. Still, I think it’s a misdirect (My guess: American Idol alum Jordin Sparks.) 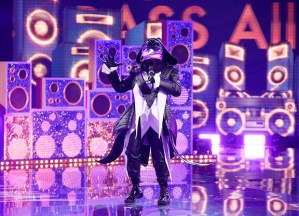 PENGUIN | Penguin tossed out several references to sitcom titles during her pre-performance video, noting that “Making people laugh was always my ticket to the new adventures of old Penguin” and that “I never curbed my enthusiasm” for being in the spotlight. But I’m thinking that those specific titles (The New Adventures of Old Christine and Curb Your Enthusiasm, in case you’re more of an hour-long drama type) are red herrings, because her weak rendition of Meghan Trainor’s “All About That Bass” really makes me think she is a sitcom actress… just not one who was on those shows. (My guess: Former View co-host Sherri Shepherd.)

FLOWER | LISTEN TO HER MAKE LOVE TO THOSE LAST NOTES OF SIA’S “CHEAP THRILLS” AND TELL ME THAT’S NOT PATTI LABELLE. (My guess: Patti LaBelle.) 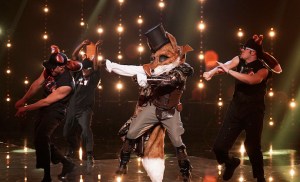 FOX | I often wonder what watching this show would’ve been like before Google. For instance, when Fox mentions that his bark was affected when he was growing up, and it made him self-conscious, I lazily typed “Wayne Brady” and “stutter” into my search bar and poof: I had my guess seemingly confirmed — even before the furry guy’s really strong rendition of Panic! at the Disco’s “Hey Look Ma, I Made It” began. (My guess: Whose Line Is It Anyway‘s Wayne Brady.)

THE FIRST UNMASKING | The night’s first casualty was Penguin, who was unmasked and revealed to be Shepherd. (Read an exit interview with her here.)

BLACK WIDOW | We’ll get to the spider’s singing in a second, but can we talk first about her physical flexibility? Even with her arm in a sling, Black Widow was able to squat her little bug booty nearly to the ground — an impressive feat. Her clues package included the Georgia flag and references to her as a “hot homemaker,” and her performance of Cher’s “Believe” was solid. (My guess: Raven’s Home star Raven-Symoné.)

THINGAMAJIG | This week, contestants brought out physical clues to help the judges try to guess their identities. But most of them — such as Thingamajig’s American Sign Language dictionary — were supremely unhelpful (which is why I’m not mentioning all of ’em). Still, his take on The Temptations’ “Ain’t Too Proud to Beg” was a smooth and enjoyable as all of his prior performances have been. But Scherzinger really has to lay off on the “my husband” stuff, no? (My guess: Indiana Pacers basketball player Victor Oladipo.)

BUTTERFLY | By this point, the winged one is really my only question mark. Though last week I was convinced she was Destiny’s Child member Michelle Williams, the “Brit Award winner” and “Bleeding Love” mentions in her video set-up now make me think that she might be British pop singer Leona Lewis? And her performance of Norah Jones’ “Don’t Know Why” didn’t offer any clarity on that front. (My guess: Leona Lewis.)

LEOPARD | I know a lot of you think Leopard is Pose star Billy Porter or Drag Race emcee RuPaul… and the show knows that, too. Why else would they troll us with “Star Strikes a POSE” and “RU Gonna Go My Way” headlines in the cat’s clue medley, given that it was so clearly pop singer Seal under that spotted head performing Katy Perry’s “Teenage Dream”? (My guess: Seal.)

FLAMINGO | The two most pertinent takeaways from the pink bird’s appearance this week: She said “mira,” aka Spanish for “look,” in her pre-performance video; and her physical item was a National Association for the Advancement of Colored People Image Award… just like the one The Real took home for Outstanding Talk Series earlier this year. Oh, and she sang “Never Enough” by Loren Allred. (My guess: The Real co-host Adrienne Bailon.)

THE SECOND UNMASKING | The night’s final casualty was Black Widow, who was unmasked and revealed to be Raven-Symoné — who plays Anderson’s on-screen sister on black-ish.

Did you guess the identities of this week’s unmasked singers? Hit the comments with your thoughts on the episode.