Veronica’s mom and dad both headed to court this week on Riverdale — and one parent came out decidedly on top.

Veronica makes it clear she’s on Hermione’s side from the start, working with Archie’s lawyer mom Mary to set her mom free and keep her dad behind bars. But Hiram’ss not afraid to play dirty: His lawyers subpoena poor old Pop Tate for his role in doctoring the speakeasy books, and Pop can’t bring himself to lie, so Ronnie tells the prosecutor she’ll admit to pushing Pop to doctor the books, but only because Hiram was extorting her. When things go south for Hermione in court, Veronica volunteers to pressure Governor Dooley into offering her a pardon… but hey, who’s the leggy brunette watching from the gallery?

Veronica’s blackmail scheme works: Faced with a mountain of incriminating documents, the governor agrees to pardon Hermione, so she changes her plea to guilty. At the speakeasy, though, that leggy brunette strikes up a conversation with Veronica. It seems she’s a private eye hired by Hiram, and she listened in on Veronica’s conversation with the prosecutor, so she has evidence he was framed. Oh, and she introduces herself as Hermosa Lodge… Hiram’s other daughter! (Huh?) She gets the prosecutor to drop all charges against Hiram, and he celebrates with an announcement: He’s running for mayor! Guess this “Lodge vs. Lodge” thing is gonna go on for a bit longer, huh? 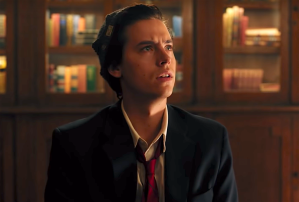 KILLER STORY, BRO | Jughead gets star struck when he learns that Mr. Chipping is the writer behind his beloved Baxter Brothers mystery novels. He’s just the latest ghost writer, though, and they’re looking to tap a Stonewall Prep student to be his successor. The original author recognizes Jughead’s name, and remembers his grandfather Forsythe as an excellent writer. (F.P. just remembers him as “a mean drunk,” though.) Jughead receives even more hazing from that jerk Brett, but after discovering an encouraging birthday message from his granddad, he decides to prove he belongs at Stonewall Prep by submitting himself to be the next Baxter Brothers writer. (If he lives that long, that is.)

STREET CLEANING | Archie still hasn’t let go of Halloween yet: He’s now dressing up in a mask and hoodie and fighting crime at night as a vigilante. The crime, of course, stems from Dodger and his crew, so Archie and Munro lay down the law at the community center: If you roll with Dodger, you can’t stay here. A couple of kids leave to join Dodger, and Archie discovers Dodger is pressuring local businesses to complain about the community center, too, and threatening to lift his “protection” if they don’t. So a masked Archie goes right after Dodger, ordering him to leave town or else. Dodger refuses, and tells Archie he’s “a dead man.” Oh Archie, can you just stay out of trouble and survive senior year, please? 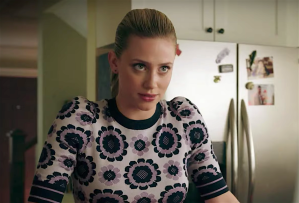 * Betty had a rough week as she and Kevin joined the Junior FBI Training Program: Their training about serial killers reminded her that she has killer genes inside her, too. (She had a grisly memory of her cat Caramel being hit by a car and her dad Hal pushing her to bash the cat’s head in to put it out of its misery.) She confessed to Charles, who had a confession of his own: He has the gene, too! She doesn’t trust him, though — and figuring out what Charles is really up to is now Betty Cooper’s latest mystery to solve.

* This week’s flash-forward: F.P. bursts dramatically into a classroom and arrests Archie, Betty and Veronica… for Jughead’s murder! OK, they clearly didn’t murder their friend, so what’s really going on here? Did Jughead fake his death? And if so, why?

* So really, we’ve never heard a thing about Hiram having another daughter, did we? Is Hermosa Hermione’s daughter, or from a previous relationship? We need answers!

* No Cheryl at all this week?! I know things were busy, but we simply can’t go a week without checking in with Miss Blossom, can we? Oh well, she probably spent the whole week combing Jason’s hair anyway… and that’s just creepy.