Things got even spookier than usual in Riverdale‘s first-ever Halloween episode… and which friendly face is actually playing a trick on the gang?

Archie and Munro decide to play local hero and keep the community center open on Halloween night so kids can stay safe while Dodger and his goons are out raising hell. Dodger tries to crash the party and pull away a young kid named Eddie, but Archie and Munro manage to kick him out. They can’t prevent him for loitering just outside, though — which Dodger reminds them of by flashing a pistol. By the time F.P. shows up, gunshots ring out… and Eddie gets hit. He’ll be OK, but he’s afraid to defy Dodger, even with Archie offering protection. So Archie resolves to clean up the streets of Riverdale, superhero-style: “I’m gonna need a mask,” he tells Veronica. (Is he officially part of the Arrowverse now?)

Let’s see what the rest of the Riverdale crew is up to on Halloween night: 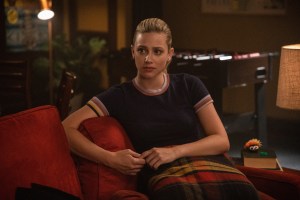 BETTY | She’s stuck at home with Jellybean handing out candy — and dressed like Halloween‘s Laurie Strode, haha. But she keeps seeing trick-or-treaters dressed as the Black Hood and the Gargoyle King, and then the phone rings: It’s a voice claiming to be the Black Hood, aka her dead dad Hal. She gets Charles to trace the call, and finds it’s coming from the treatment center where Polly’s being deprogrammed. She calls and chews out her sister for playing such a nasty prank, and thanks Charles for his help. But maybe she shouldn’t trust him: We learn later that Charles is eavesdropping on her late night phone calls with Jughead. What’s up his sleeve, hmmm? 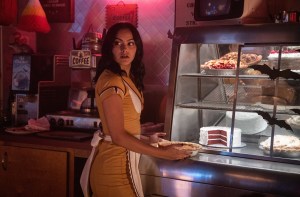 VERONICA | Staying late to close up Pop’s, Ronnie agrees to stay open to give a trucker a hot meal before he heads home to his kids. Heartwarming holiday story? Yeah, not so much. She overhears a news report that a serial killer known as “the Family Man” is on the loose… and he matches the trucker’s description. She manages to flee to the speakeasy and shut off the lights with him in pursuit, and when he flicks on a lighter in order to see, she douses him with alcohol and sets him aflame, knocking him out with a chair for good measure. That’s the lesson, kids: Trust no one. (And never lock up by yourself.) 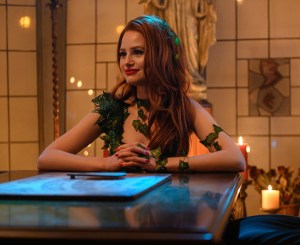 CHERYL | Toni is fed up with living alongside Jason’s corpse — who can blame her? — and forces Cheryl to bury his body in the family plot. But soon after, they discover a creepy sailor doll in the house, and Cheryl suggests a séance to clear out all the bad juju. (The Poison Ivy and Harley Quinn costumes are a nice touch, too.) The Ouija board does point to the letter “J,” but Nana Rose says it actually stands for Julian — the unborn triplet of Cheryl and Jason! Cheryl absorbed him in the womb! Cheryl convinces Toni that they need to dig up Jason again and bury the doll to rid themselves of Julian’s spirit… but the doll mysteriously shows back up the next day. Oh well, at least Cheryl has her Jason back.

* Jughead was the victim of a Halloween prank, too, getting buried alive in a coffin by his classmates in the spirit of Poe’s “The Cask of Amontillado.” It was just an elaborate hazing ritual, he discovers after spending a night in captivity — but he’s still curious about the fate of “the Stonewall Four,” the quartet of students who’ve mysteriously vanished over the years. And Moose might’ve joined them: Jughead returned to his dorm room to find him gone without a trace.

* Reggie and Kevin decided to prank Mr. Honey by toilet-papering his office, but the new principal caught them in the act. After pressing Kevin and threatening to dash his dreams of attending NYU, Mr. Honey extracted a confession and lowered the boom on Reggie, scolding him for being such a class clown. After Reggie thoroughly cleaned the office, he came out to find his beloved car toilet-papered and the windows smashed. Is Mr. Honey even less sweet than we thought?

* That mysterious VHS tape that showed up on Betty and Jughead’s doorstep? It’s just six hours of surveillance footage of their house, shot from across the street. And people all across town are getting similar tapes, too. Who’s behind this creepy act of voyeurism? And more importantly, who still owns a VCR??

* We also got anther flash-forward, this time with F.P. and Betty grimly identifying Jughead’s dead body — and it sure looks like him. Could Riverdale really be planning to kill off its beanie-wearing sage? Nah… but maybe?

* We got a Katy Keene mention! Veronica casually name-dropped her NYC fashion designer pal, who quickly whipped up those superhero costumes for Archie and Munro. We smell an impending crossover…

* Pretty sure that it wasn’t actually Polly pranking Betty as the Black Hood. Is Hal really still alive? Or is someone else messing with her head?

* We scoffed just as much as Betty did when Charles urged her to sign up for something called the “Junior FBI Training Program.” “An FBI program for high schoolers?” she asked. “Is that actually a thing?” Yeah, we have the same question, actually.