Were you worried that Riverdale was getting too safe and boring this season? Well, you won’t be after this week’s completely cuckoo episode.

Betty and Charles have located the abandoned motel where Edgar and the Farmies are hiding out, but when they send in an undercover agent as a pizza delivery man, he gets gunned down. Edgar has discovered that Alice is a snitch, and is demanding a quarter-million dollars, passports and a bus for transport. Betty counters that he has to release a hostage as a show of good faith, so he sends out Polly… with a ticking bomb strapped to her chest. Betty rushes to defuse the bomb — should an untrained teen really be handling this? — and thankfully does so with just seconds to spare. Oh, you think that’s ridiculous? Just you wait.

With Veronica and Toni’s help, Betty manages to scrape together what Edgar demands and commandeers a school bus, driving to the motel herself and demanding to see her mom. Evelyn knocks her out cold, though, and she wakes up next to Alice, tied up in a motel room. Alice reveals that Edgar’s master plan is for Evelyn and the Farmies to drive the bus off a cliff while he “takes off in his rocket.” (Yes, he’s been building a rocket!) They free themselves and knock Evelyn out, ordering the rest of the Farmies to board the bus while they look for Edgar.

And they find him, dressed in an Evel Knievel jumpsuit and preparing to board his “rocket.” (Which looks more like a rickety carnival ride than a vessel actually capable of flight, but never mind.) He’s ready to “ascend,” but Alice has other ideas: She points a gun at him, he pulls out his own gun… and we hear gun shots. But when Betty arrives, Alice is still standing, and Edgar is shot dead. So Riverdale’s The Farm chapter is officially closed — until Evelyn wakes up and forms an even more militant splinter group, that is. 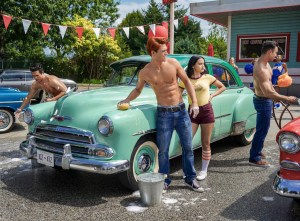 CLEAN-UP DUTY | Archie needs major cash to turn his boxing gym into a community center, and Veronica wisely suggests a shirtless car wash, which gives us a great excuse to run the photo to the right. But they’re still way short, and Munroe’s little brother is getting beat up by thugs who work for a local crook named Dodger, who recruits kids to commit crimes for him. Mary wants to take Archie back to Chicago with her — it’s actually safer there, somehow — but Archie refuses and goes into vigilante mode, beating up Dodger and his goons with a baseball bat and coming back with a duffel bag full of cash.

He can’t just spend the stolen money, so he asks Veronica to launder it for him, but she’d rather just give Archie the cash he needs. He won’t need it, though: Mary comes around and decides to stay in Riverdale and work as a pro bono lawyer, helping Archie turn the gym into a non-profit. That’s nice… but we’re thinking Dodger will probably come back looking for his cash at some point, right? 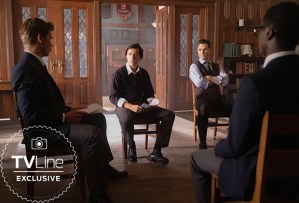 * Jughead’s arrival at Stonewall Prep was a little rocky, if you’ll excuse the pun: He did get Moose for a roommate — hi, Moose! — but that smarmy tour guide Brett also rooms with them, and multiple students warned Jughead to watch out for his head games. The two quickly clashed in Mr. Chipping’s writing seminar, and Jughead stood up for himself… but Brett retaliated by putting up flyers all over school revealing Moose’s sordid past in Riverdale. Yep, it’s gonna be a loooong school year.

* Plus, at the very end of the episode, Betty and Jughead heard a doorbell and went to the front door to find a mysterious VHS tape left on the doorstep. Season 4’s big mystery, perhaps?

* Cheryl’s Nana Rose went a little battier than usual this week, so Toni hired a muscle-bound nurse named Darius to look after her. But when Cheryl suspected he might have stumbled upon Jason’s body, she fired him on the spot. He was innocent, though; Jason’s body actually moved because there was, um, a live rat inside it. (Ew.) And now Toni has discovered Jason’s body, which is bound to make things even more awkward at Thistle House.

* Veronica officially changed her last name to Luna, in honor of Hiram’s birth name — but I had to giggle when she found her imprisoned dad casually sitting in his study: “I own that jail. I come and go as I please.”

* When Nana Rose was babbling, she mentioned “the triplets,” and Cheryl corrected her to say Juniper and Dagwood are just twins. But maybe she knows more than Cheryl does? Were they triplets… or (gasp) were Cheryl and Jason?

* By my count, between Betty and Archie, Veronica tried to give away close to $300,000 this week. So is anyone keeping an eye on the Lodge family finances while Mom and Dad are behind bars, or nah?

* But really, what was Edgar’s actual plan, though? To fire himself into the air and then… land safely somehow and never be caught? We’re starting to think he didn’t really think this whole thing through.