In a stunning upset, the Riverdale gang actually saw the inside of a classroom this week — and met a fresh pair of imposing authority figures.

It’s the start of a new school year, and Archie, Veronica, Betty and Jughead almost miss their first day of senior year after a late evening filled with Champagne flutes and rather steamy love scenes. When they sneak into school late, they’re confronted by Riverdale High’s new principal, Mr. Honey — hi, Kerr Smith! — who vows to bring “order, discipline [and] consequences” back to the school. (Well, fewer murders would be a start.) Cheryl tries to butter him up with a welcome basket, but he lays down the law, cancelling her plans for a back-to-school dance. Hmmm… he clearly hasn’t learned yet that you don’t mess with Cheryl Blossom. 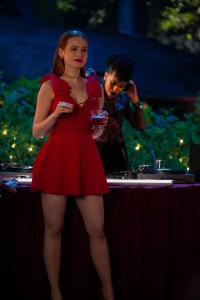 Cheryl responds by throwing a back-to-school party at Thistle House instead, and takes the mic to announce that her new nemesis Mr. Honey will be “beheaded by homecoming.” Um, she doesn’t mean literally, does she? (After all, she is still keeping the corpse of her dead brother Jason propped up in a back room.) The party gets broken up by F.P. and the cops, following a noise complaint from Mr. Honey. And he doesn’t even live nearby! Cheryl gets the last laugh, though, when she has a huge beehive dripping with honey delivered to the principal’s office. Yep, in this battle of wills, our money is firmly on Cheryl.

Meanwhile, Jughead is being wooed by another school: the fancy Stonewall Prep, after their writing teacher Mr. Chipping — hi, Sam Witwer! — took a liking to Jughead’s short story. He offers Jughead a spot in his writing class, but Jughead doesn’t think he’d fit in with Stonewall’s snooty student body. Mr. Chipping won’t give up, though, and after he visits F.P. at the Jones family home, Jughead reluctantly agrees to take a tour of the school. It’s as snooty as he feared: The tour guide insists on calling him “Forsythe,” and he’d have to wear a uniform to school. (The horror!) 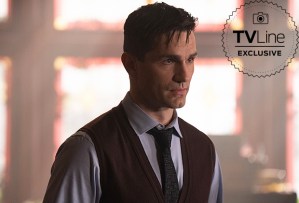 But he does enjoy getting into an in-depth discussion of Moby Dick with the other students: He likes being at a school where people actually read, he confesses to Betty. Plus, Mr. Chipping seems nice — at least so far. (He’s definitely a serial killer, though, right?) It’s Betty who finally pushes Jughead to transfer to Stonewall Prep, telling him they can make the different-schools thing work for a while. F.P. is happy, too; Jughead’s grandpa went to Stonewall, too, it turns out. But the future isn’t too bright for Jughead, as a flash-forward reminds us, with the whole town of Riverdale frantically combing the woods and calling out for a missing Jughead during spring break. We’ve got our eye on you, Mr. Chipping.

* Betty had her own issues to work out, with Alice still undercover at The Farm and not responding to Charles’ messages. Betty reconnects with Kevin, who’s still communicating with Fangs the Farmie, and trusts him enough to bring him into the loop with Charles. Kevin brings back vital info: He knows where The Farm is hiding out, and reports that Edgar is armed to the teeth. Uh-oh… fingers crossed this doesn’t become a Waco situation. 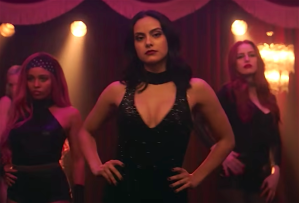 * Veronica got yanked back and forth between her two parents this week, with reporters hounding her about which one she’ll support in their upcoming trials. (Her dear old dad even leaked damaging info about her to the press as a warning.) But after much debate — and a sultry speakeasy performance of “All That Jazz” from Chicago — Ronnie held a press conference to announce she’d be supporting neither parent. She’s Team Veronica, basically.

* Reggie had family drama, too, as his dad’s physical abuse came to light when he came to school with a black eye. Archie tries to stick up for him, but Reggie turned on Archie instead. Later, they had a heart-to heart where Reggie admitted he was always jealous of Fred’s unconditional support of Archie: “I have no idea what that feels like.” (Aw.) Reggie ended up taking a baseball bat to his dad’s beloved sports car, and that act of rebellion (somehow?) sparked a reconciliation between father and son.

* Archie’s juvie pal Mad Dog enrolled at Riverdale High and joined the football team, so he’s officially a part of the gang now. Now who can we set him up with? Is anyone still single at this school? Are the other Pussycats still around, or did they leave with Josie?

* To escape the Lodge family stink, Veronica changed her last name to “Gomez” for her Harvard application. (That’s Hermione’s maiden name, by the way.) But now she’ll just be bombarded by “Are you related to Selena??” questions.

* Speaking of Veronica: Why were reporters and paparazzi allowed to enter Riverdale High and her apartment building to harass her? Have these places ever heard of security? We know the Pembrooke has a doorman.

* Betty had the quote of the week when she responded to Kevin’s apology for his behavior while under The Farm’s spell: “Like when you dragged me by my ankles to get a lobotomy?” Yeah, that’s a little tough to forgive and forget, Kev.