The Riverdale episode we’ve all been dreading is here, as the cast and crew say goodbye to Luke Perry with a beautifully restrained tribute episode.

Yes, precious little of Riverdale‘s usual loopiness is on display in Wednesday’s Season 4 premiere — although we do get Cheryl chatting with Jason’s corpse over morning tea and snidely referring Jughead to “Insufferable Smurf.” The town is busy preparing for its first Fourth of July parade in years, and Archie, Veronica, Betty and Jughead are planning a camping trip ahead of senior year. (Jughead even cracks a joke about Archie’s close encounter with a bear.) But the joking stops when Archie gets a phone call: His face goes ashen, and he falls to his knees.

F.P. is the one who breaks the bad news to Archie and his mom Mary: Fred was driving home and pulled over to help someone whose car had stalled… when he was struck and killed by another car driving by. A stunned Archie mourns along with his mom before sharing stories about Fred’s good deeds with his pals in the backyard — but he’s also stewing with rage because the car that hit his dad never stopped. That night, he has a dream about his Grandpa Artie, who’s collected all of his friends and family together in one room and tells Archie: “You are supposed to get him.” Archie wakes up determined to bring his dad back to Riverdale.

Borrowing a hearse from Reggie’s dad’s used car lot, Archie drives to Cherry Creek, where the accident happened, and tells the funeral director he wants to take Fred’s body back to Riverdale in time for the Fourth of July parade. The funeral director hesitates at first, because Archie is underage — oh, suddenly that’s an issue, Riverdale? — but after a stern talking-to from Archie’s lawyer mom, the funeral director relents. Archie can’t bring himself to identify Fred’s body, though, so Betty and Veronica volunteer to do it for him… and yep, it’s Fred. 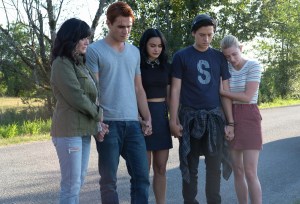 They track down Fred’s truck at the scene of the accident, and Archie finds his dad’s jacket and pouch of chewing tobacco still in it. He’s interrupted by a woman holding flowers: She’s the stranded driver Fred stopped to help… played by Shannen Doherty! She says Fred talked about Archie the whole time, and he actually pushed her out of the way of the oncoming car, saving her life. She says a prayer along with Archie and his friends — but Archie’s still angry. When Veronica says Fred died a hero, Archie asks, “Why did he have to be one?” And when he finds out the hit-and-run driver is out on bail, Archie charges off to confront the guy who killed his dad.

Archie ends up on the driver’s doorstep — a guy named George Augustine — and shoves him up against the wall as soon as he answers the door, screaming at him to shut up. An apologetic George tries to call him “son,” but Archie cuts him off: “You took away the only man who could call me that.” They’re interrupted, though, by George’s teen son Jeffrey, who tearfully confesses: He was the one driving at the time. He took the car without asking, and he doesn’t even have a license. He sobs out an apology, and as he and his dad hug, Archie realizes: George was only protecting his son… just like Fred would have. So Archie lets go of his anger and brings Fred’s body home to a true hero’s welcome, with local parade-goers cheering and holding up signs honoring Fred. (Thanks, Cheryl.) 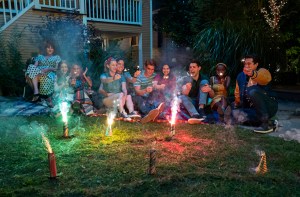 At the funeral, Josie sings “Amazing Grace,” and Archie delivers a touching eulogy, remembering one Fourth of July that got rained out, so Fred bought a bunch of fireworks and they set them off in the backyard. “He’s the greatest man I’ve ever known,” Archie says, certain that Fred’s spirit will live on in Riverdale. (Hiram gallantly paid for the whole funeral, and we also see Betty take a private moment at her dad Hal’s vandalized gravestone.) Jughead pens Fred’s obituary, calling him “our knight in flannel armor,” and the gang celebrates Fred’s life with one more fireworks show in Archie’s backyard. Archie vows to keep his dad’s memory alive every day… and in a final scene, he walks through the garage alone — where Fred soundproofed the walls so he could play his music and helped him fix up his jalopy — and breaks down in anguished sobs. The episode ends with a title card: “In Loving Memory: Luke Perry, 1966-2019.”

Alright, Riverdale fans: Once you finish drying your tears, give the Season 4 premiere a grade in our poll, and then hit the comments to share your thoughts. Plus, click here to get the inside scoop on the episode from executive producer Roberto Aguirre-Sacasa.