The Riverdale gang dedicated the Season 4 premiere to mourning the untimely death of a beloved character… and a beloved cast member.

Luke Perry passed away suddenly in March following a stroke, and Riverdale addressed that tragedy in Wednesday’s premiere, with Perry’s character Fred Andrews dying after being struck by a car while trying to help a stranded motorist. “Very early on, we landed on the idea that Fred should have a heroic death,” executive producer Roberto Aguirre-Sacasa told reporters following a recent press screening, adding: “It felt like that’s a way Fred could’ve gone.” To give Fred’s (and Perry’s) death the respect it deserved, the Riverdale writers decided that the premiere wasn’t “going to launch any huge stories for the season. It was really going to be kind of focused on [Fred’s passing], and the emotional effects of that passing for everyone.”

That includes the motorist Fred stopped to help (and whose life Fred ultimately saved), played by Perry’s old Beverly Hills, 90210 co-star Shannen Doherty. “Over the seasons, Luke and I had talked a lot about trying to get Shannen on the show, and the timing never worked out,” the EP remembers. But when this role came up, “rather than have another actor play that, we thought it would be nice if it were someone he cared for in real life. And he cared so deeply about Shannen… She really wanted to be a part of it, from when we first talked to her about it.” 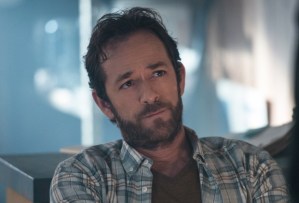 The episode also incorporated previously shot footage of Perry as Fred — including flashbacks of Fred soundproofing the garage so Archie could practice his music and helping his son fix up his jalopy — as well as real-life photos of Perry that his family gave the show permission to use. “One of our executive producers, Sarah Schechter, was very close to Luke, and very close to his family,” Aguirre-Sacasa explains. “We involved them as much as we could… They read the script, and then they provided those great photos. I loved seeing him in his baseball uniform.”

The loss of Fred is a huge one, not just for his son Archie, but for all of Riverdale, Aguirre-Sacasa notes. “On the show, he’s always kind of been our moral center. We frequently describe him as the one good parent on Riverdale.” Now that he’s gone, Archie will be determined to keep his spirit alive by “trying to do what his father did, which is help his community, help his town, help his friends, make the right choices… He’s always wanted to follow in Fred’s footsteps, but now feels that burden even more so.” But it won’t be easy: Archie is “going to struggle with grief, and struggle with how to live up to Fred’s memory.” 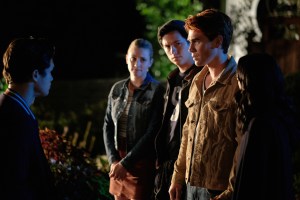 That struggle continues all season long for Archie: There is a sizable time jump from the premiere to next week’s Episode 2, from the Fourth of July to September, but “the shadow that Fred’s death casts is on Episode 2, and honestly, we’re about ten episodes into the season, and we’re still feeling that,” the EP admits. “When a tragedy like that happens, everyone grieves, and then people move on at different points, but for the person who’s at the core of it, they live with it every day. We don’t pretend it didn’t happen. It’s very much still permeating Archie’s story.”

In fact, Season 4 “has almost a melancholy feel” following Fred’s death, he hints, and will be a bit more grounded overall — and a throwback to Riverdale‘s freshman season. “A lot of people said Season 1 was much more grounded, so we’ve used Season 1 as a bit of a template. We definitely still have crazy stories. But instead of, say, four crazy stories per episode, we have two crazy stories per episode and two that are a little more emotional or psychological or real… There are things that I know the fans missed, and that we missed, that we’re trying to write to.”