The Big Three: “No dinner can go worse than the one where Mom botched the meal and unleashed an angry tirade in the kitchen.”

This week’s This Is Us: “Hold my burned-raw Cornish game hen.”

Tuesday’s episode shows how two gatherings in two different time periods start out teetering on polite, but eventually tumble into full-on hostility. It’s highly entertaining to watch, thanks to some choice asides uttered by sidelined siblings and near-brawl that breaks out between two unlikely combatants.

Read on for the highlights of “The Dinner and the Date.” (And make sure to hear what stars Sterling K. Brown and Susan Kelechi Watson, as well as series creator Dan Fogelman, had to say about that epic dinner-table duel.)

MALIK & DEJA’S EXCELLENT ADVENTURE | On their way to school, Malik talks Deja into skipping class to spend the day roaming Philadelphia together. The parts of the city Randall’s shown her tend toward the touristy, and Malik really wants to take her to a cheesesteak place called Max’s. She muses that she visited Philly as a little girl but can’t remember much except for some Christmas-type lights shining on some water, then laments that she’s losing memories of times with her grandmother — like that one. After wavering a bit, Deja finally decides to ditch school, too.

Their day unfolds via flashbacks throughout the episode, but we’ve got some very uncomfortable dinner sequences to get through, so here’s the quick version. Malik is incredibly charming as he squires Deja around his city, and it’s clear to both her and us that he’s taken with her. But after he works up the nerve to hold her hand while they’re taking a break in a park, she sits up and suddenly says she wants to go home.

She explains that Randall is the only man she’s ever known who doesn’t lie, and though she concedes that Malik may be equally earnest, she’s weirded out by the fact that he has a baby and has dated other girls. He says he only dated Janelle’s mother, but he understands why Deja is wary of him. He relates that his parents have been together for 22 years, and many people in his family have had long, loving relationships, and he felt like he let them down when his ex-girlfriend got pregnant. Then he adds that he has one more place he wanted to show Deja. She tentatively holds out her hand and says, “Show me.”

Of COURSE it’s the place with the Christmas lights she remembers as a child, which turns out to be Boathouse Row. She’s so moved, she kisses him. And it’s good that she had such a full, fulfilling day, because when she returns home, school has called — and Randall and Beth are pissed. 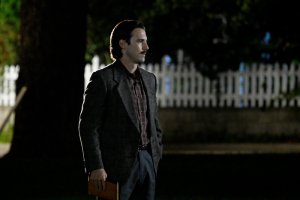 IN WHICH JACK IS NOT HIS BEST SELF | Let’s go back now to the event we first learned about in last week’s ep: the night that Randall’s teacher, Cory Lawrence, and his wife Trish attend dinner at the Pearson house. Even before the Lawrences show up, Rebecca is curious about why Jack invited Cory in the first place, but Jack downplays her suspicions (and her questions about why he’s wearing a sports jacket to the meal). Meanwhile, Trish playfully wonders why her husband is doing so much consciousness-raising with his only black student.

Once the Lawrences arrive, Jack immediately loses his mind, never passing up an opportunity to one-up Cory. Kevin’s cracks about how boring the conversation is don’t help anything, either. The situation reaches its lowest point when Jack all but forbids Randall to attend a black art-and-culture fair with his teacher, and that’s when Rebecca pulls her hubs into the kitchen for a chat.

“If you’re competing with Cory for your son, you’re gonna win… Our son is always gonna choose you, always,” she whispers gently but firmly. “But if you do that, if you make him choose, Randall’s gonna lose out on something really special, something he needs. And where would that leave him?”

After the Lawrences leave, Jack stops Cory on the walkway outside the house and confesses that the increasingly complicated nature of Randall’s questions about himself and his place in the world have Jack “feeling like I’m letting him down.” He also adds “I can’t teach my son how to be black,” and Cory tries not to chuckle too much as he says, “No, don’t do that. Because you can’t do that.” Mr. Lawrence takes pity on Jack in his floundering, lending him a book of Langston Hughes’ poetry and adding that Randall is really into Hughes right now.

Upstairs later, Jack tells Randall he’s going to read the collection of verse. Randall, quite rightfully, scoffs. But then he recites Hughes’ “I, Too,” and says he and Jack can read the book together. 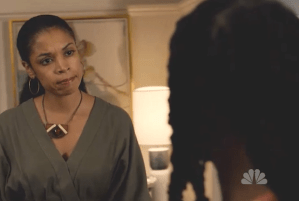 BETH VS KELLY | And now to the main event: Randall and Beth’s dinner with Malik’s parents Darnell and Kelly. Before the Hodges family shows up, Randall is adamant that he wants both of Malik’s parents to join them in decreeing that Malik and Deja should not date. But Beth wants to take more of an open-minded approach. After all, “Keeping the kids apart didn’t work out too well for Romeo and Juliet’s parents,” she points out. Meanwhile, Kelly is already unimpressed with what Malik tells her about Deja and her family, right down to the fact that her father’s brother was The Manny. “His brother is Morris Chestnut?!” she cries, and he corrects her. “His brother is white?!” she shoots back.

The minute the Hodges arrive, Kelly shushes Randall’s booming greeting (Janelle is sleeping in her carrier) and then Beth’s plan to have wine lubricate the evening fall short when the Hodges say they don’t really drink. “It’s crazy that you have a baby,” Annie adds, apropos of nothing, and that sets the tone for the night.

Darnell and Randall actually start to get along, though Darnell notices Randall staring at the multiple tattoos on his arm. Upstairs, Kelly pretty much says that Deja — with her drug-dealer mother and her periods of homelessness — has too much “baggage.” And that SETS. BETH. OFF. “She’s been through a lot, but so have you, right?” Beth says, all smiles. “I mean, having to raise your child’s child and all.” We are one step away from earrings coming off when Randall calls up that dinner is ready.

In the pantry, Beth swigs from a hidden red wine bottle and announces to Randall, “This dinner is about to get as awkward as hell.”

WE’LL SKIP DESSERT, THANKS | She is not wrong. Kelly uses the pre-meal blessing to get in a dig at the Pearsons. Darnell admits that he didn’t vote for Randall. Then the baby starts screaming. “Since Janelle is your daughter and Deja is your girlfriend, that kinda makes Deja her stepmom,” Annie says, so helpfully, and then Beth has had enough. She sends the girls upstairs while Malik takes his daughter for a walk to calm her down. “All right,” Mrs. Pearson announces when the adults are alone. “I think it’s time for some real talk.”

The conversation gets super intense. At one point, Darnell and Randall have to pull their wives apart. Randall tries to explain that he and Beth worry that being with Malik will somehow bring Deja right back into her former life, which offends the Hodges greatly. Then Darnell takes off his shirt to reveal all of his tats, adding, “You can choose to see me and my mistakes, or you can choose to see something different.” But, he adds, he won’t let them write off his sweet, smart, kind son.

Then Deja enters, on the verge of tears, and apologizes for skipping school and lying about her whereabouts. But she’s not sorry, though, for liking Malik or spending the day with him, which was “the best day of my life.”

After the Hodges leave, Randall and Beth tell Deja that she’s grounded for lying, but she’s allowed to spend time with Malik as long as their visits are supervised. Then they ask her to tell them about him. “The thing about Malik is, he makes me feel like myself,” she says dreamily. “Like I have a piece of home.”