This week on The Good Doctor, Shaun’s poor communication skills put both his residency and his relationship with Carly at risk.

After forfeiting his first chance as lead surgeon for the betterment of a patient, Lim assigns Shaun an appendectomy. During the procedure, Shaun asks Nurse Hawkes for a straight clamp. When she hands it to him not at a 45-degree angle, but at an angle that he deems “inefficient,” he refuses to take the clamp from her and asks that she leave the operating room. Afterwards, Lim calls Shaun into her office to explain himself. When she tells him to apologize to Hawkes, he refuses. “Why would I apologize?” he asks. “When you’re lead surgeon, it means that you’re in charge,” Lim explains. “If anything goes wrong, it’s your fault.” He leaves her office and heads down to the cafeteria to confront Hawkes — but rather than apologize, he takes out a straight clamp and explains why his way is the “efficient way.” When he refuses to leave, she gets up from the table and heads to H.R.

Soon after, Lim approaches Shaun and tells him that Hawkes has filed a complaint. He has a problem with communication, she says, and when he refuses to hear it, she tells him point blank that he screwed up. “This incident will be noted in your file,” she tells him, “and if this, or anything like this happens again, that will be the end of your residency.” She then gives him a chance to say he’s sorry, but he remains silent until she points him in the right direction. “I failed. I’m sorry,” he says. “Good,” Lim replies. “Now go say those words to Nurse Hawkes and mean them.” 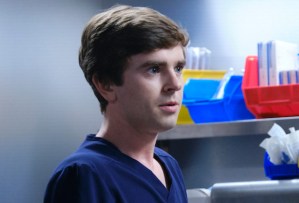 Shaun this week also deals with new relationship anxieties. The nurses have him convinced that Carly might not consider him to be her boyfriend if she didn’t invite him over to meet her friends. Morgan fills Claire in on the situation, then Claire — who has already put Shaun’s surgery at risk by forgetting to submit the patient’s blood work — goes to Carly and asks her to speak to Shaun. But before Carly has a chance, Claire and Morgan find Shaun outside the pathology lab, building up the courage to confront the lab tech. Worried that any potential conversation will mess with Shaun’s head, Claire lies to him and says that she has already talked everything over with Carly and it was all one big misunderstanding; the laughter that Shaun heard when he called Carly and thought she invited friends over was just a podcast she had on in the background.

Off screen, Morgan goes to Carly and finds out that Claire fibbed. “Shaun was about to talk to Carly. That’s what he needed to do,” Morgan says. “Shaun’s problem is communication, and you made it worse.” And so, Claire finds Shaun and tells him the truth. This leads to an important conversation between him and Carly. Carly admits that she’s mad at him because “whenever you have a problem, I hear it from… anyone but you.” Shaun apologizes, then gets up to leave. Carly tells him that this is part of the problem. “You have to tell me what’s bothering you,” she says. So he puts down his backpack and asks why she didn’t invite him over. She explains that she had some old friends over for a poker game, and they can get a bit snarky; they’re quick to tease and play impractical jokes on each other, and she knew that Shaun wouldn’t like that. She thought it’d get weird, so she decided not to invite him over. In response, Shaun opens up about his long-estranged father. He tells Carly that Dad would always send him to his room during poker games because Dad’s friends would tease him and say that his voice was funny. Carly assures Shaun that her friends wouldn’t have done that, but “when you bring the guy you’re dating into the mix, it can be a disaster.” She assumed that was a possibility with Shaun, and she shouldn’t have done that. “I’m sorry, too,” she says. “Can you forgive me? I wasn’t a great girlfriend.” As soon as Shaun hears the word “girlfriend,” his face lights up. The relationship has been defined, and all is forgiven. They kiss and make up, then she offers to introduce him to her friends, but he politely declines. (In Shaun’s defense, Carly’s friends sound terrible.) 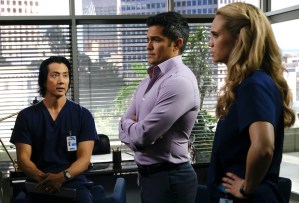 Outside of Shaun’s orbit, Melendez, along with Morgan and Park, work on a pregnant woman with a mass that has surrounded the uterine arteries. During an initial procedure, they are unable to control the bleeding. To continue, they have to perform an embolization of the arteries feeding the tumor. That way, they can close the patient up and hold the baby in place for two months, rather than deliver it prematurely. It’s a high-risk procedure which is supposed to be run by the chief of surgery, but Melendez tells Morgan to forgo protocol and proceed. Lim eventually catches wind of Melendez’s failure to comply with protocol and tells him that it makes her look bad. From here on out, he has to follow the rules, despite their relationship outside of work.

Soon after, the patient’s stats drop. The arterial embolization is rejected above the bladder, and the team will have to go back in to prevent additional internal bleeding. They can deliver the baby at five months, but its chances for survival will be slim. There’s an alternative procedure that would stop the bleeding and allow the baby to grow to term, but Mom would run the risk of uterine rupture. They leave the decision in her hands, and she chooses to put her life at risk to save her daughter. In the O.R., Melendez nicks an artery and they’re forced to take the baby out at 23 weeks. Unfortunately, Mom dies. Melendez goes to tell the husband, then brings him to the O.R. to meet his daughter. Afterwards, the surgeon returns home looking positively devastated. Lim joins him on the couch and takes his hand, as he tries to fight back tears.

Meanwhile, in the C-story, Debbie gets fired after repeated warnings about giving out free coffee in the cafeteria. She ultimately convinces Glassman to hire her to work in the clinic, which is starting to suffer due to poor office management.

What did you think of The Good Doctor Season 3, Episode 6? Hit the comments with your reactions.