This week on The Good Doctor, Shaun is assigned his first surgery, but not everyone thinks that he’s ready. Meanwhile, outside the operating room, Carly and Shaun work through an intimacy issue.

We begin “First Case, Second Base” at Carly’s apartment. Carly and Shaun share a kiss, then an alarm goes off that alerts them to stop the kiss and resume their movie. “Naughty thought: How about we don’t wait 12 minutes for our next kiss?” Carly suggests. Shaun insists that they’d never finish the movie, but she kisses him again. And again. And again. He pauses the film, and Carly puts her hand on his face, then his chest. He then backs away and says it’s better if they stick to the agreed-upon schedule. The following morning, Shaun talks the situation over with Lea; he tells his roommate that he prefers to touch only one thing at a time. Lea asks Shaun if he’s explained this to Carly, but before he can answer, he receives a very exciting text: He is set to lead his first surgery! Shaun and Lea jump up and down to celebrate, then Dr. Murphy rushes off to work, as giddy as we’ve ever seen him. 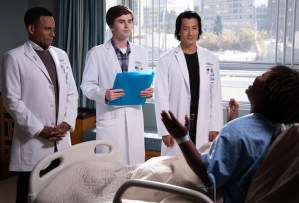 At the hospital, Shaun, Andrews and Park go to visit the surgical candidate: a budding chef named Beth who has been diagnosed with esophageal cancer. It’s a serious condition, but a esophageal resection should render her cancer-free. What’s more, she won’t need a feeding tube. Outside the patient’s room, Andrews approaches Lim, who has handpicked the world’s most genial patient for Shaun. We find out that it was Park’s chart, but Lim stepped in and handed it to Shaun. She defends her decision to Andrews, who accuses her of coddling the resident. She says that Shaun gets to keep this case, regardless of what the former chief thinks. Meanwhile, in the MRI room, Park admits to Shaun that he’s a tad perturbed that Lim took the case from him, but insists that he’s happy for his fellow doctor. He asks Shaun if he’s nervous, but the answer is no — that is, until the MRI reveals that Beth has extensive scar tissue and will in fact require a feeding tube.

Lim orders Park to break the bad news on Shaun’s behalf, but when the men enter Beth’s room, Andrews forces Shaun to confront his patient. Soon after, Lim catches up to Shaun and Andrews in the surgical skills room and informs them that Beth wants someone other than Shaun to perform the resection. A distraught Shaun runs out and heads to the bus, but Lim catches up to him. She tells him to come back inside and he follows her into Beth’s room. Lim admits to Beth that Shaun’s phrasing was unfortunate, but assures her that there was no deceit or negligence. Shaun has her full confidence in the O.R., and if Beth doesn’t trust him, then she doesn’t trust the chief of surgery, and they can arrange for her transfer to another hospital. Beth ultimately agrees to let Shaun perform the surgery again, and the procedure is scheduled for the next morning.

Later that night, Shaun is visited in a dream by his dead brother Steve, who was last seen in the fifth episode of Season 1. He tells Shaun that surgery is the “easy-peasy part.” He wanted this, and he needs to let himself enjoy it. But Shaun argues that he can’t enjoy it, because “if Dr. Andrews has to take over, then I have failed… and I have endangered a patient’s life. And if I am no good at the easy-peasy part,” he asks, “then what part am I good at?” At this point, Steve instructs Shaun to “blow out the candles,” which was always his way of telling his younger brother to take a deep breath. Shaun takes three deep breaths, then drifts into an even deeper sleep. 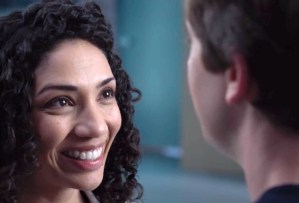 The following morning, Shaun is approached by Glassman, who assures him that he is ready to lead his own surgery. He also hands his mentee a surgical cap that was worn in the room when he performed his own first surgery many, many moons ago. Shaun takes the cap, then goes to prepare. He watches what appears to be a surgical video with Japanese subtitles when Carly comes in to wish him luck. She offers him two good-luck kisses, then brings up Lea’s advice about telling each other their likes and dislikes. In accordance, she tells Shaun that they’re not going to touch lips anymore because there’s something else she’d like him to touch. She then takes his hand and places it on her breast. “So, what do you think?” she asks. Shaun’s face lights up. “You… don’t have any lumps,” he says. “Win-win!” Carly responds. (Heh!) 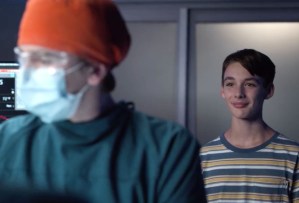 We next see Shaun head into the operating room, where he is joined by Andrews and Park. He blows out three candles, then proceeds as Steve watches over him (or behind him, if you wanna get technical). Deep into the esophageal resection, Shaun freaks out. He takes off his surgical mask and walks out of the O.R. Park follows, per Andrews’ instruction, then Andrews pages Lim. Lim comes down and tells Park to take over, but he refuses. He thinks Shaun sees something that they don’t, and tells his fellow doctor to breathe. Shaun envisions his older brother again, then takes three deep breaths before he explains himself. He tells the others that there was a much larger area of tumor-free esophagus than he anticipated, and there’s enough to perform an alternate, reconstructive procedure — the very procedure he watched on the videotape before Beth’s surgery. This procedure will prevent the need for a feeding tube, but it’s too advanced for a third-year resident to perform. To resume, Shaun must forfeit his first surgery and allow Andrews and Lim to take over while he walks them through it, step by step. Lim assures Shaun that he’ll get another chance very soon. 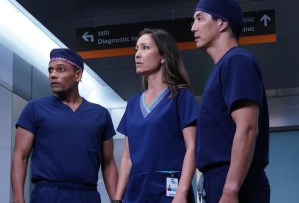 Even though Beth’s surgery is a rousing success, Andrews still isn’t confident that Lim made the right calls on this one. His ultimate takeaway is that Shaun failed his first time up at bat. Lim disagrees with Andrews’ assessment and applauds the teamwork it took to complete the alternate procedure. “We don’t work alone,” she says. “Shaun came up with an idea, Park got it out of him, I approved the surgery and you — the only reason Shaun is working here is because you believed in him. Yay, team!”

Later that night, Shaun heads to Carly’s apartment. He tells her that he didn’t get to lead his first surgery, but that the procedure went very well. Then, to follow up on the whole “only touching one thing at a time” rule, he asks if he can come in and check her other breast. You know, “for lumps.”

Elsewhere in the episode…
* While Shaun, Lim and Andrews proceed with Beth’s surgery, Lim tells Park to scrub out. Turns out there’s an appendectomy with his name on it in the adjacent O.R.! (For those keeping track at home, that means Shaun and Morgan are the last of Melendez’s protégés waiting to lead their first surgery.) 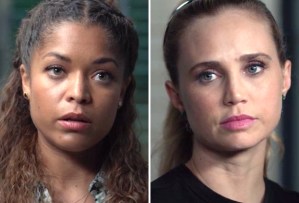 * Morgan confronts Claire after she allows her preconceived notions about alcoholism and addiction to cloud her judgment with a patient. She spends the episode convinced that he’s a drunk just like Breeze, even though his wife claims that he hasn’t touched a drink in years — and she’s right. The man is ultimately diagnosed with Auto Brewery Syndrome; a tumor was blocking his intestinal tract, so carbs were being fermented rather than digested, and his stomach was creating its own alcohol. What an interesting case!

* When Glassman finds out that Debbie has a gun, he has a home-security system installed in hopes that she’ll part with the weapon. After she refuses, Glassy has a talk with Shaun, who has just gotten to second base with Carly. “Does Debbie let you touch her breast?” he asks. When a flummoxed Glassman replies “yeah,” Shaun tells him that he shouldn’t be worried about anything else. And so, Glassman tells Debbie that he’ll work on his compromising skills. They kiss and make up, and that’s the end of that.

What did you think of The Good Doctor Season 3, Episode 5? Hit the comments with your reactions.