In a world similar to our own, humans souls take animal form and the all-powerful Magisterium decides what is and isn’t heresy. Welcome to His Dark Materials. Hope you brought your golden compass!

IHBO’s adaptation of Philip Pullman’s fantasy novels, which premiered Monday, follows Lyra (Dafne Keen, Logan), an orphan raised at Oxford’s Jordan College after being left there as a baby by her uncle, Asriel (James McAvoy, Split). Asriel has maintained his distance from the girl since, visiting infrequently, but that hasn’t stopped her from dreaming of the day he’ll come to whisk her and her daemon Pantalaimon (voiced by Kit Connor, Rocketman) away to join him on his explorations of the North.

When Asriel does show up, though, he is more concerned with presenting some polarizing findings to the college’s teaching staff. He claims to have photographic proof of dust, a mysterious substance that is invisible to the naked eye, attracted only to adults and of high interest to the Magisterium… who might’ve killed the last explorer who was looking into it. What’s more: Asriel claims that dust leads to other worlds that the Magisterium doesn’t control. 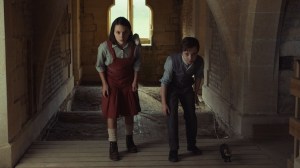 Soon, he’s secured funding to continue his exploration, and he leaves almost as quickly as he arrived — much to Lyra’s pained chagrin. So when a beautiful, sophisticated woman named Mrs. Coulter (Ruth Wilson, The Affair) suddenly shows up at the college and offers to take Lyra to London to be her assistant, the girl jumps at the chance… provided she can bring her friend and fellow Jordan College orphan, Roger, with her.

Only Roger’s nowhere to be found, and Lyra starts to think that he’s been kidnapped like some other townie kids known as Gyptians. Rather than scoff at her tales, Mrs. Coulter says she can help Lyra find Roger, but they’ve got to go to London to begin the search.

What Lyra doesn’t know is that a golden compass-like instrument known as an alethiometer, which happens to be in the college headmaster’s possession, has foretold that Lyra will need to make a big journey that will include a betrayal — with her as the betrayer — and that she must stay in the dark about the whole thing. Right before Lyra leaves, the headmaster (Clarke Peters, The Wire) gives her the alethiometer and tells her that it will always tell her the truth… even though she has no idea how to read it.

In the episode’s final moments, Lyra makes the final decision to go to London with Mrs. Coulter. She runs for the airship and boards, much to the woman’s delight. As they leave, Lyra sees the Gyptians sailing to London on their own search for their missing children. And somewhere else, we see Roger in a cage, being held against his will.

Now it’s your turn. What did you think of the episode? Grade the premiere via the poll below, then sound off in the comments!