There’s been an elephant in the Dancing With the Stars ballroom for a few weeks now, and his name is Sean Spicer.

That’s not meant as a dig at Spicer’s dancing skills (though it’s not an entirely inaccurate comparison, depending on the week). Rather, I’m referencing Spicer’s continued presence on the ABC series, which has started to elicit shock and frustration as he remains on the show despite low scores and minimal improvement. In the last two weeks, Sailor Brinkley-Cook (a well-scored frontrunner) and Karamo Brown (who’d been making huge strides) were both booted, while Spicer has yet to find himself in the bottom two at all.

Given Spicer’s lack of dance experience and polarizing stint at the White House, I had predicted he’d be the first to go this season, even with a seasoned pro like Lindsay Arnold at his side. But despite earning scores that are well below those of his competitors, Spicer seems to have a loyal fanbase whose votes are making up for the numbers on the judges’ paddles. (And DWTS is clearly as much a popularity contest as it is a legitimate talent show — even though it shouldn’t be.)

The question is: Did Spicer’s supporters show him enough love on Monday’s dance-off episode to keep him in the running? Before we get to the results, let’s break down all of the evening’s performances:

Sean Spicer and pro Jenna Johnson (Jazz) — Speaking of Spicer, he was up first this week (alongside Jenna Johnson, who filled in for Lindsay after her mother-in-law passed away a few days ago). Sean’s timing was still all over the place, and his movements lacked fluidity, but I was relieved to see that he at least got through that kick line sequence without incident. Also, the judges have apparently decided to stop hiding their disappointment that Sean is still on the show, making remarks like, “The mermaid had better legs in that dance!” and “Dory from Finding Nemo has a better sense of direction.” Harsh! (But fair?) Judges’ Score: 20/30

Lauren Alaina and pro Gleb Savchenko (Jive) — Aw, man, I so wanted this jive to be perfect. To Lauren’s credit, she doesn’t let mistakes derail the rest of her performance, and the (many!) sections of this dance that didn’t include errors were so fun and sassy. But it all fell apart for a while when Lauren and Gleb performed near the judges’ table — and not just for a second, but for an extended combination where Lauren looked completely at sea. She recovered nicely and didn’t seem too rattled, but the mistakes were glaring. Judges’ Score: 24/30

Kel Mitchell and pro Witney Carson (Salsa) — When Montell Jordan’s “This Is How We Do It” is your soundtrack, you can’t really go wrong — but Kel and Witney still delivered a salsa that was precise, fast and massively entertaining. I do wish that these two had a bit more chemistry, but Kel’s technical skill has become some of the strongest in the competition (and hey, they still got a 10, so clearly I know nothing.) Judges’ Score: 28/30 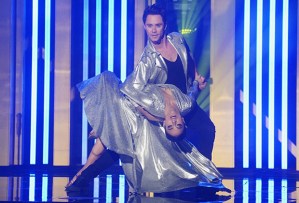 Ally Brooke and pro Sasha Farber (Paso Doble) — I spent most of this number mistakenly thinking Ally’s single was called “Fire,” only to eventually learn it’s called “Higher.” D’oh. This paso doble, however, was fire, from the moment Ally abandoned that microphone stand and joined Sasha in the choreography. Can we talk about that insane twirl that Ally did through Sasha’s legs? Or that drum-heavy section with her fabulous skirt whips? Or the rest of it, which was equally flawless? Judges’ Score: 30/30

Hannah Brown and pro Alan Bersten (Quickstep) — Last week, Hannah wrote an emotional behind-the-scenes diary entry for Bustle, and it broke my heart to learn that she hasn’t been enjoying her time on DWTS thus far. That’s why it was so exciting to watch her slay this quickstep; as soon as she played a little air guitar in the beginning of the dance, Hannah seemed much more at ease than she’s been in weeks past, and that care-free confidence stuck around for the entire number. As for her footwork? She didn’t miss a single step in this very fast, very intricate routine — and we can all agree that she deserved a perfect score, no? Judges’ Score: 29/30

Kate Flannery and pro Pasha Pashkov (Jive) — Kate remains a delight to watch every week, and her tribute to her late sister was joyous and celebratory. Unfortunately, Kate’s timing was a little off for parts of this routine, and she seemed to get in her head whenever an error took place. Judges’ Score: 24/30

James Van Der Beek and pro Emma Slater (Contemporary) — This contemporary had everything: Insane chemistry! A moody cover of an upbeat ’80s song! Lifts that make me a little nervous! James and Emma had been struggling to connect for much of this season, but the love and admiration they seemed to share in this contemporary was just perfect. Judges’ Score: 30/30

After the individual performances took place, the couples were paired up for Monday’s dance-offs. Here’s how it worked: Two duos faced off simultaneously on the dance floor, performing in the same style, to the same song, at the same time. The judges then picked a winning couple from each match-up, who then got two bonus points added to their total for the night. (James and Emma, having earned the highest cumulative score last week, earned immunity from the dance-off, though they were still eligible to be in the bottom two and/or get eliminated.)

First up, Kel and Witney triumphed over Ally and Sasha in the jive; next, Kate and Pasha beat out Sean and Jenna in the cha-cha; and lastly, Hannah and Alan out-salsa-ed Lauren and Gleb in a crazy-fun final dance-off.

OK, your turn. How do you feel about Kate and Pasha’s elimination? Drop all of your thoughts in a comment below.