In a move that surprised pretty much no one with any knowledge of the original Watchmen comics, this week’s episode of the superhero drama confirmed that Jeremy Irons’ character is, indeed, Adrian Veidt.

“But he’s supposed to be dead!,” you say? Well, yes. And given what happens in the rest of the hour, the explanation behind that mystery apparently is a matter for another day.

If you’ve made it this far in the recap without one molecule of a clue of what I’m talking about, let’s catch you up: Fans have long suspected that Irons was playing Veidt, an intellectually gifted gazillionaire whose alter ego is the superhero Ozymandias. But the HBO series had been hesitant to say that the man we’ve seen gallivanting about the British estate was, in fact, Veidt/Ozymandias… despite the fact that a promo’s close-captions identified him as such a few weeks back.

Anywhoo… Irons is Veidt, Veidt is Ozymandias, Glory is Ben, and Ben is Glory. Read on for the highlights of “She Was Killed By Space Junk.”

LIFE ON MARS? | We open on someone making a call to Mars. It’s Designing Women‘s Jean Smart, whom we later learn is playing FBI Agent Laurie Blake, and she’s calling Doctor Manhattan. In the one-way message, she tells him a joke about building a brick barbecue. We’ll come back to this later. (And make sure you check out what Smart had to say about her Watchmen debut and that fleeting, bawdy interlude that we’ll get to in a minute.)

We learn that Blake is known for taking down masked vigilantes — who are considered criminals — and that the American public is generally not on board with that sentiment. Everything about her screams that she’s over the whole hero thing… yet her apartment is pretty much an homage to the heroes (like herself — as Silk Spectre —Doctor Manhattan, Ozymandias and Nite Owl) who made up the Watchmen. Laurie is at her apartment when Sen. Keane swings by to let her know he’s asked the bureau to assign her to investigate Judd’s death in Tulsa. He thinks the Seventh Kavalry is to blame, but they haven’t taken credit for the murder. In general, he’s very protective of the Defense of Police Act (aka DOPA), his signature legislation. “Masks save lives,” he tells Laurie, but she correctly susses out that if DOPA goes down, “You don’t get to be president.” She’s mocking him, but that ends really quickly when he reminds her that presidents can pardon anyone. Even, say, an exile currently living on Mars?

TIME FOR A HISTORY LESSON | At a briefing the next day, Blake learns a whole lot about the Seventh Kavalry in Tulsa. The group first started causing trouble after Redfordations (which were linked to the Victims of Racial Violence Act) meant that those who were linked to the Greenwood massacre could claim benefits and buy land in and around Tulsa. That meant a lot more black people were suddenly in the city, which made the racists lose their damn minds. The Kavalry took their inspiration from Rorschach, another Watchmen member — they wear masks very similar to his — and that’s all Laurie has to hear before she’s announcing that she’s going to Tulsa with just a junior agent named Peter accompanying her.

Peter has a Ph.D. in history and is well-versed in the Watchmen’s history, so he’s our window into Laurie’s past. She and Doctor Manhattan were together. She’s not a fan of Veidt’s. Doctor Manhattan can teleport and can foresee the future, and he’s the reason America won the Vietnam War. He also fell in love with two women, one of whom was (obviously) not Laurie.

AN UNINVITED GUEST | Blake approaches Angela at Judd’s funeral, but Angela maintains that she’s retired from law enforcement. The service goes well until a Kavalry member who tunneled into the highly secure graveside service approaches the group with explosives strapped to his body. The man calls Sen. Keane a “race traitor” and demands that he come with him. So Laurie shoots the Kavalry idiot, which takes him out but activates his bomb, which starts ticking down to BOOM. Angela yells for everyone to run, then drags the bomber to Judd’s grave and dumps the coffin — including her deceased boss/friend — in on top of him. Pore Jud, indeed.

Later, Blake tells Angela that they found wheelchair tracks at the murder scene, and that she knows about the secret compartment in Judd’s wardrobe. She calls Angela “Sister Night” and says, “I eat good guys for breakfast.” Angela is not intimidated in the slightest, and the exchange between these two fierce powerhouses is one of my favorites on TV this week. 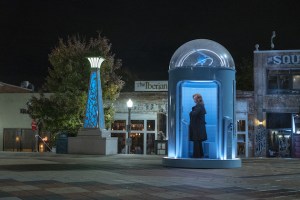 When she’s alone in her room, Laurie pulls out a metal case containing a large, blue sex toy and a copy of an old Esquire with her and Doctor Manhattan on the cover: “Spectre Takes Manhattan” it reads. Next thing we know, she’s slept with Pete, who is wearing a mask in bed.

Back in the Mars phone booth, Laurie sadly notes that her message will never be heard, “but sometimes it’s nice to pretend.” He’s been on Mars for 30 years, she notes just before the transmission sends. A single tear slips out of her eye as she says, “Goodnight, Jon.” (Side note: Jonathan Osterman is Doctor Manhattan’s real name.)Then she steps out of the booth… and a car drops from the sky. An orange dot in the heavens flies away quickly, and Laurie starts laughing hysterically. 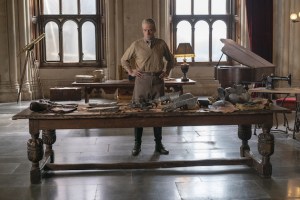 VINDICATION! | Meanwhile, at the manor house, the Watchmaker’s Son playwright rigs up a strange-looking suit and puts Phillips in it: The butler freezes to death, and the older man angrily kicks the body to pieces. Then, he rides to a field, shoots one of a herd of buffalo and gets shot at by a masked man in return; we later learn the other man is the game warden. The two men have an exceedingly polite war going on via letters — and when the British man dictates a reply to his steno secretary Crookshanks, he signs it “Adrian Veidt.” Then, he dons a gold-and-purple outfit and purple mask.